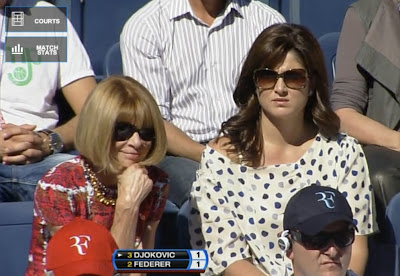 Now that the Night of a Thousand Bars has lurched by with little more than an inebriated whimper, it seems the editrix whose global muscle strong armed the planet into her idea of a good cause has gone missing. No front row can lay claim to her attentions. No air kisses can be had and no knighthoods have been bestowed. Noteworthy collections, even some that count her as a patron saint of sorts have had to do without her presence. The sting of her absence must be privately galling though I doubt any would dare to comment let alone complain. It just doesn't seem right or politic that she go missing just at the beginning of the fray. There must be others besides myself that ask what she can be thinking. Isn't this considered a work day? Aren't these next days and next week part of the "season"? Doesn't she have a duty to tramp from show to show like everyone else? Isn't she the reason that so many have spent so much for so little but to amuse and entice her? It's like throwing a party and the guest of honor chooses another party they prefer to yours. Perhaps she feels that her efforts last night earned her a pass. Considering that she may feel that for a few consecutive days she's carried the world's fashion gorilla on her slender shoulders and deserves some "MOI" time. Maybe she has. I'm not convinced. Either way you slice it, the Lady is MIA and don't bother looking in the Blogger's pit or the ladies room of Lincoln Center. She's far, far away. I caught sight of her at the U.S. Open. I'm pretty sure it was her. The camera scanned the VIP boxes and I could have sworn I saw a bob with big dark glasses camouflaged in what must have been a red, tweed Chanel dress. If today were the finals it would be understandable. But today is only the semis. What's worse is that Desiree Rogers is the sub.
Posted by Fluff Chance at 4:06 PM

You are right! Miss W is in Roger's box right now.

this may be a sign that the "queen' is passing the tiara to someone else.

Maybe this will be the beginning of her fading influence? One could only hope......

shame on her!!!! then what is point! all this fashion talk and all this fashion night out... I guess, she just does not care enough!!! it is her job to go to the shows, specially american fashion week! no? a

She is, and has been for a long time, a terminal, pretentious bore. Yes, that's her, hiding coyly under mammoth shades and her bangs. Good thing she guested at the semis - her Roger bombed out. (Maybe her bad karma?)

I miss Diana Vreeland, Carmel Snow, and the other really great ladies of fashion (some of which I've left out of this little list).

Fashion is her business, her livelihood. She wears the crown she placed on her own head. She should have been in those front rows. Yes, shame on her.

Up front and honest assesment of the Empress of Fashion. Good to see that someone knowledgeable has the guts to say so. Shame on Anna!
This site is fantastic!
So upfront in a world that is not!