What a curious "collection". Just because you send a bunch of women down a runway in "clothes" doesn't make it a show or a collection. Maybe it's enough that it's simply an event. That's what I think happened in Paris. Zac had an event that was billed as a fashion show but could be better described as self indulgence on an international scale. It's like too much information. We had to hear about his new french boyfriend/stylist and his decision to show in a city that would better understand and appreciate his gifts. That's all well and good assuming that Paris is the right city and his gifts would be wrapped and ready to go. Judging from what I saw 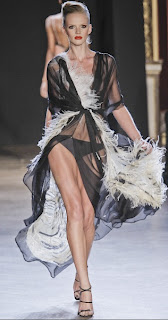 it was more like a trip to the continent with Mommy's suitcase filled with her 40 year old trousseau. Why would he choose to present his "collection" in a venue that was the setting for YSL shows in the past? Then, to decide

to recreate the hair and makeup of those shows from the history books on a slew of black girls (they were HOT then) and a warhorse like Karmen Kass and not arm them with fierce fashion was an oversight. What they did wear was in essence all that he brought in his carry on luggage: some filmy nighties a few feathers, oh, and the kitchen sink. I think he ran out of time and space and had to leave the good ideas behind. 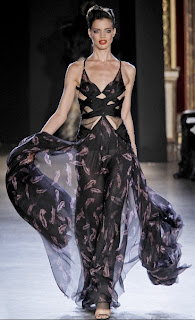 The few tweed Chanel-ish jackets that opened the show were about as good as it got. The bits that accompanied them are still a question mark.

What, how and why? Sheer jeggings with feather appliques or patch works of lace abounded. Chiffon dresses that were all peek a boo with "Cat on a Hot Tin Roof" bras and panties peeking through were the essence of his brand of mystery. This is the school of lead feet. Why whisper when you can SCREAM? Technique was wasted on draping, tucking and twisting when the motifs are dated looks via Valentino that've been hammered to death. I was dismayed at how old the girls looked with their painted lady lips an

aux Folles than sexy siren. It brought to mind a fire alarm sounding in a cheap hotel for down and out vaudeville acts. Come to think of it even Zac's wave was a TOTAL knock off of Val's at the end of his shows. What?

I know how harsh this sounds but someone should have told him not to go without the goods. Paris is an unforgiving place with some of the greatest talents in the world. Why do you think so few designers show there as opposed to NYC? Here it's a free for all where anyone can play as long as they have the price of admission. Paris is not. Where was Mama Posen, CEO and president of the company, when this was all in the planning stages? Could it be that her own unbridled ambition exceeded his exaggerated self regard, adding up to a lethal cocktail of hubris on the rocks with a twist? More than likely this romp was the brainchild of his "amour fou" who piggy backed his way to glory on Zac's fragile shoulders. Love is meant to be selfless, or is it selfish? Well it's a good thing he has his Z Spoke collection, he'll need it. This "collection" looks to be a "hard sell".
Posted by Fluff Chance at 7:34 PM

That first look--the one with the belly-button window--I nearly fell out of my chair laughing.

It is laughable, can I please go to Paris and show my old 1980 disco clothing on the runway, I have got a closet full....

This is a big old plate of hot mess!! Not one piece wearable. Shameful!!