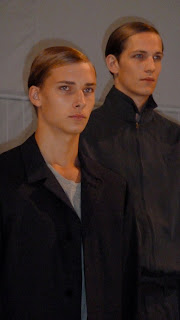 This was an amusing show. Whether you want to dress head to toe in the feathers of the Duck or just choose to wear pieces of their dream, I found it pretty cool and seductive. The message is a loosely tailored, slouchy and layered one in a palette that is decidedly grey or colorfully tweedy with blasts of color in draped, droopy yoga pants. The lack of seriousness and the feeling of freedom was clearly expressed from the layers on layers of crisp linen down to their new take on the iconic Clarke Wallabee shoe, which was great. A lot can be said for a presentation that hammers the message home in a clear succinct voice. Seating the audience on one side of the tent and leaving the other clear for the models to line up on different levels of the bleachers was a great way for us all to view the collect 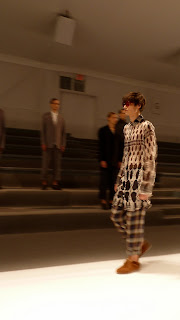 ion against each exit that came after. The reference points were never far away from what you were seeing. I kept looking at the whole puzzle as all the pieces took shape. The sound track was also very effective in that it was one piece of music for the whole show that continually grew in shape and volume supporting the collection that unfolded before us. Probably one of the most clever tricks of this one way mirror was that the audience never had the chance to study itself when the opposite side of the runway was peopled only by the models and the clothes. 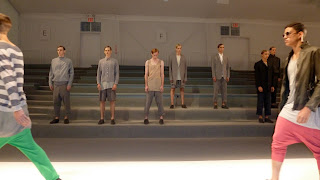 There was the theme of grey, smoke, taupe and nude that I saw before in previous shows I talked about, but this was more urban in its look and feel. Duckie Brown is always about cool, edgy clothes that push the boundaries of what constitutes menswear. I always have the feeling that their men are not hemmed in by accepted views of masculinity. They blur lines with pieces and styling that appear androgynous like sunglasses on guys that say Jackie O or clothes that are draped in ways that make me think she, as well as, he. I enjoy that walk on the wild side because it tests my limits and makes me question just what it means to dress as a man. That isn't to say that I am going out and stocking up on kilts and trading my brogues in for tranny heels , only that Duckie Brown makes me question. 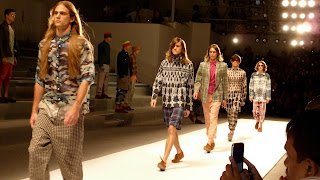 es in colors and prints that had a very different feel. What had been almost monastic switched gears to a tone of playful abandon. There was a bug print that showed up on an over sized chiffon shirt in black on white paired with droopy pants in a bold plaid. Multi-colored, over-sized tweed jackets came with knit tops and pants all in a riot of colors. It all seemed to say that any and all things go. Butch or fay, it's all good. Young or old, whatevahs..... 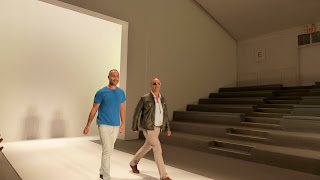 nal one that will appeal to some and not to others. What I like about their work is that it gives you the chance to see things from a different angle. It never feels tired or derivative in that mind numbingly obvious way that some designers do with little imagination and even less skill. On top of making great clothes, these guys know how to cobble a killer shoe.