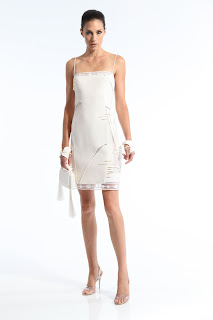 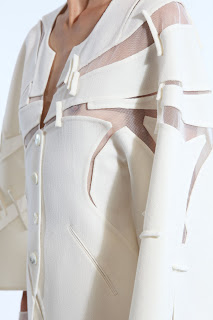 Is this Ready to Wear parading in Couture's clothing or the opposite? Ultimately, that becomes a moot point. It is what it is, which is in a word, extraordinary. Trying to answer that question is as difficult as it is to figure out how this master works. I don't care who you are or what your sartorial inclinations are, Ralph Rucci is by far the master of design in this country and one of perhaps 4 in the world. As grand a pronouncement as that is, so is the other worldliness of his clothes. 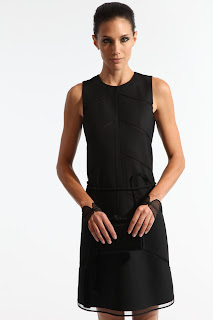 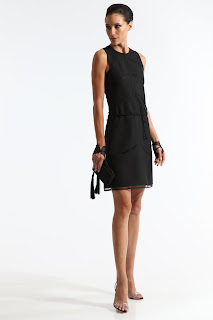 so completely this season is his approach to the themes that run through his work for the last 20 years. He is almost scientific in his quest to find a more essential way to express his passion for volumes, the way fabrics and construction can go beyond a simple garment and the magic of surface detail. Whether it is the mind of this designer, the art of the embroiderer o 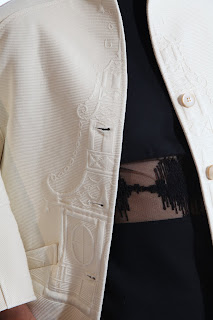 r the skill of the sewer this collection went the distance in offering up clothes that looked more like creations from nature than those from of a man. 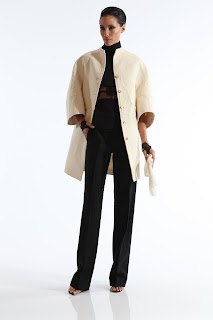 I had the pleasure of viewing the collection in the stillness of his art-filled show room. Each piece was a microcosm of his overwhelming imagination. Whether it 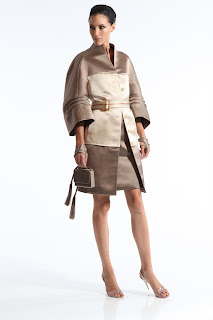 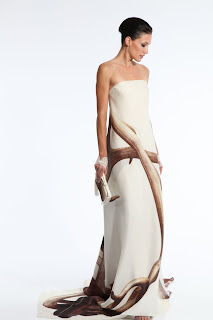 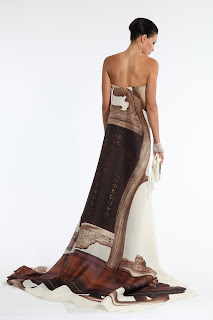 olly by Clarence House, I marveled at their seeming simplicity and power. One after another dresses, suits, and evening gowns wafted into the room like a mist off of water. Some were symmetrical in cut and detail but most were as varied in their elements as bark on a tree or the surface of water. The simple fact of their beauty and subtlety of their message annihilates much of what passes as fashion. These clothes are a testament to women and their magnificence. Chado is a celebration of women in all of their variety. These clothes are a love letter. 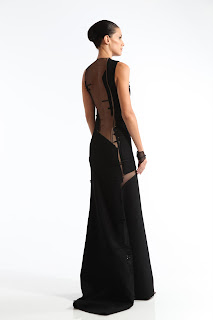 superfluous. From his "glove" to the evening bag to his shoe with invisible straps and elegant heel the presentation was achingly glamorous. I say achingly because it gave 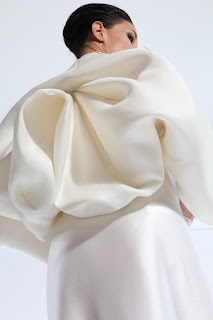 me a twinge in my stomach. I looked at these clothes and had the desire to see them on everyone. If only women who are seen by the world would wear these clothes. If only magazines like Vogue, Harper's and the like could take off their collective sunglasses and see this work for what it is. The Annas, Glendas, and a legion of other sycophants of this world have shown their allegiance to a pagan god, the god of self interest and self aggrandizing power. This myopia only diminishes their validity and does us all a great disservice. The very people who should champion this work are the ones who ignore it. That said, I was inspired by his obvious joy in the creation of this collection. Everything about it showed his unwavering commitment to his muse. There was only a mood of optimism, not a trace of rancor.

There were many favorites. Horse hair bands with "sound wave" embroideries were a running theme throughout. Such a simple motif gave energy to the clothes as if they were alive, vibrating. "Embroideries" of small planes of silk taffeta that read as tiles randomly placed in an all over grid on a ground of tulle made for a black cocktail dress that boggles the mind. The time and effort that go into these clothes explains their cost. A column in black double-faced wool suspended from the shoulders and cut with a single spiraling seam was the most perfect gown. That dress alone would make all other red carpet dresses blush. That one dress would finally and forever silence that likes of Rachel Zoe and other so-called style gurus who do nothing more than listen to themselves talk. His palette of cream, "paper bag", the perfect taupe, blackest black, lime, saffron and sunset red were beautiful in their absolute purity.

I wish you all could have sat in on this narrated journey. Ralph is a fascinating man with a child like wonder. He makes the magic that is design come to life in the most natural way. And like a child he possesses a well of joy that nothing can diminish.
Posted by Fluff Chance at 1:09 PM

What a delight to see. I cannot image how soulful it would be to see these amazing designs in that setting.

Thanks so much for giving your all to those who could not experience Fashion Week in person. I followed your commentary avidly.

Thank you for such an elaborate review on the Chado Spring 2011 collection and, above all, revealing a bit about the man. His work is exquisite and incomparable and his staff is largely considered to be one of the best, if not the best, in the world. Thank you for this brief glimpse into Chado.

Absolutely more to my taste. I'm afraid, however, that this designer may be in hostile times. Crabgrass is growing all over 7th Avenue.

Fluff, thanks for sharing your heartfelt opinions with us. They are always refreshing and insightful.

Fabulous! A very few duds, but mostly wonderful clean beautifully detailed shapes that are very flattering - they do not overpower.

I made that white swing coat for myself some years ago - out of a heavy cotton slubbed drapery fabric. Terrific.

How interesting to see horsehair braid used as a decorative element. I remember when it was used for construction purposes.

Thanks for this report and the link to the slide show on the entire collection.

absolutely fabulous. i see a bit of mr. beene and the control of the best italian designers. and the embroideries are just stunning.

gorgeous...your commentary worthy of "a how to read style as art." This is the sort of piece, in depth and passionate, that allows us to go beyond initial impressions and penetrate what we might otherwise miss.
Style Defined NYC

He is an amazing designer with an incredible talent unherald in American Fashion. I just wish he were a nicer person.