Lagerfeld seemed to take a long relaxed exhale in this show. All of the tenets we've come to expect from Chanel were there for the most part but in a decidedly relaxed and unhurried way. The Chanel woman gets dressed for Spring 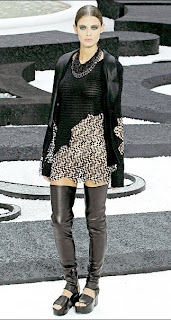 but she does it in a supremely confident and unselfconscious way. Isn't that what style is meant to convey? A confident foot placed one ahead of the other with one's gaze set on a vanishing point..... That's what these clothes seem to be saying. She is beyond the fray of scrambling Fabulistas and off in a wider world participating in life, not trying to harness and direct it. The difference is subtle but worlds apart. Lagerfeld seems to be saying , "Get on with it before you waste the little time you've got."

The collection seemed integrated into the idea of everyday and high and low. Suits were varied in cut with and without embellishment to the tweeds that often were constructed of unexpected elements. What was consistent throughout was an ease and offhanded luxury. The idea of uptight was nowhere to be seen.

Some chic jackets were paired with punctured 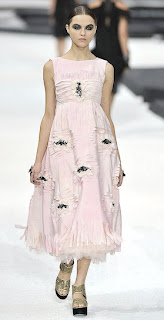 jeans and chunky platforms. An interesting "boot" was a platform sandal with an attached leg of leather that climbed to the thigh. Not for everyone, but sexy. As low as skirts fell so did the waists rise. He has set a new height for empire lines that hover at the apex of the breast or just below it. This is not the easiest for fuller bosomed girls, making them look meaty, but in the best cases it created a look of nonchalance and innocence. Many of the dresses had a Heidi/Dirndl vibe with double layered skirts. These took me back to 1981 (yes, I know. I'm packing an AARP card in my "bill fold") when I saw my first ever fashion video of a Valentino collection at his boutique

at Detroit's Renaissance Center while spending spring break from college with my friend Vicki Beekhuis in Grosse Point, Michigan. I was TRANSFIXED. The ladies running the boutique were so kind to replay the

whole show 3 times. I could not get enough. I remember the music was Stanley Jordan with ALL the BIGGEST girls of the day: Dalma, Mounia, Iman, Tara Shannon, Kirat, Anna Bayle, and on and on. After that day I was sketching everything with a double layered dirndl skirt. (Vicki's father Dr. Jan Beekhuis was one of the preeminent plastic surgeons then and I foolishly said I'd love to see him wor 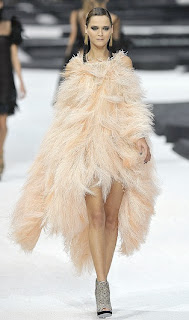 k....one day. He took me up on my request and next thing I knew I was standing over his shoulder in scrubs as he ripped through 2 nose jobs, an eye job and a macro dermabrasion in about 2 hours max. Needless to say, I got way more than I bargained for, but I digress.) Well, Lagerfeld was working a similar look but with nothing more than air giving it loft. Chunky, slouchy knits played a big part in the line up with one girl looking very Lee Radziwill in that self assured, world traveller way.

Feathers were included in some tweed dresses for day and in an explosion that Carmen Kass wore. It was though he tossed them into the air and they landed in a cloud surrounding Carmen. She looked hot. Lace was part of the casting as well with a great dress on Stella Tenant that looked like geometry. Many of the girls were more womanly in shape which added to the "reality fashion" vibe of the collection. The icing one this cake was the inclusion of Ines de la Fressange the face of Chanel through the better part of the Eighties and one of the most elegant women of this age. What I appreciated most about this collection is that Lagerfeld didn't bother to preach. Why should he when the whole world is already converted?


Images: Courtesy of GettyImages and GoRunway.com
Posted by Fluff Chance at 1:05 PM

loved seeing Ines on the runway-at 51 I can so appreciate the decision to return her to her rightful place, I did a brief post on it this morning. She was the face of Chanel when Lagerfeld was just designing the clothes-her image and style had a lot to do with that early success I think. pgt

Fluff Chance, just getting around to reading your blog (the great thing about no longer being a peon garmento, is that I follow my own calendar, not fashion's.) Adore reading your insightful reviews of the shows. This one, in particular, has moved me, as you've revealed a bit about your own fashion history. Prompts me to say, that if you were to write a book/memoir, I for one would buy it in hardcover, and come to an event to have you sign it. (I know too many musicians who have had their lives destroyed by pirating to download your ((future)) ebook gratis!) Also, where you talk about horses in the Lanvin post, since I am living in a very horsey area (but not really part of that set) I can appreciate your descriptions, and you have piqued my interest to want more in that vein. Thank you so much for sharing your experiences.

I am wondering whether or not we ever met. I am from the "D." I lived in NYC from 79-91 with a hiatus for 4 years in London,Milan and Sydney. Do you remember when all the international shops were in the RenCen? Do you know Michael Stein? He is a costume designer went to Parsons? He is one of my great long time friends and we lived together in NYC.

I`ve got no words how I love Chanel...
great blog, I enjoy reading it!