One thing about carousel horses; they may be the hardest workers at the fair but in the end they drop you off right where they picked you up. The same can be said for this cotton candy treat that Marc Jacobs whipped up today at Louis Vuitton. It had all the elements of a high minded amusement with a captivating set, beautiful models and clothes that appeared to be something more than they were. From the first, they had a paper doll feel with couture-ish cut out clothes. Flat, hard and fake come to mind. Even the most seasoned models looked out of their depth with these brittle dre

sses in Broderie Anglaise and organza. Much was made of the matte crocodile jackets and coats that followed in pastel shades. Editors marveled at the techniques employed to match the scales and create an illusion of uniformit 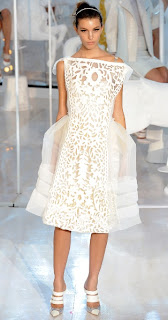 y to the skins. Well, that's what one does when working with skins of that nature. That attention to detail and technique was lost on a few of the Broderie dresses with flowers hacked in half an misaligned to others that were seamed to them. The lace collars on many of the pieces had that familiar awkward shape; too round, too sweet and so rigid. They are a hallmark of his

oeuvre as they appear time and time again in his own collections as well as LV. It seems even the best hands in the business can not disabuse him of this unappealing detail. Still, the look of it from a vast remove was interesting and even beautiful in one or 2 instances. The Prince of

Wales plaid slicker with the navy Broderie invading its surface was choice as were the pale yellow gator pieces. The shoes with their metal banded straps and a bag here and a bag there looked worth the price of admission. It's when the dresses become artsy with scrims of organza covering their surfaces with a pleat here and a fold there that I began to ask myself what point was being made? The same question ate at me with his dresses that debuted here a few weeks back in clear vinyl. The same grab, twist and tuck action marred them over and over again throughout the show. All I could think was that it is Marc's idea of couture technique in draping. Sort of the Lanv 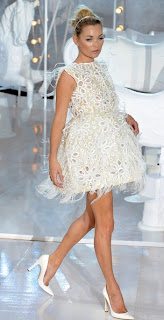 in/Elbaz method employed by even more confused hands. When the dresses and tweed suits sprout feathers and fail to fly I start to yearn for the fun house or even the side show. Feathers, like clowns, can scare people and not just little kids. Despite Kate Moss' hankering for the spotlight now that she's an old married woman, her closing number would have looked more appropriate on her kid.
The Dior elephant was hovering to the side of the Merry-Go-Round but not out of view for everyone there and the rest of us filling the cheap seats. If this collection and the Marc Jacobs collection that was just shown here are a job application of sorts for the Big Brass Ring, I for one am not convinced that Marc is the right man for the job. The proportions that were proposed here were odd, unwieldy and amateurish. That they referred to shapes that Christian Dior created but without their sophistication and elan is a red flag in my estimation. It would be a pity to not only alter the course of the house yet again, but to send it down a dark and rutted road would be too modern...and not in a good way.
Posted by Fluff Chance at 5:15 PM

He was upstaged by Karl. The first white-themed show was dramatic - the second, not so much. And will real women wear these dresses? Kinda costumey to me.

Excellent musings, well said! I do agree that LV's dresses were too theoretical in a very papercut kind of way. Karl on the other hand knows just how to approach it....
redpoppyfashion.blogspot.com

well, well .. yes, awkward in each of them, and models wear clothes professionally.

a truly awkward season even while many designers were praised for collections that, umm, didn't work

Amazing post, although i kind of liked the collection.