At the risk of appearing harsh, Valentino and Chanel put on spectacular shows. Grand, sweeping, prolific and in many cases arresting, these 2 houses have a firm (death) grip on what luxury looks like. Besides shoes, glasses, bags and a million other things that sell widely and wildly across the universe the clothes in these collections set standards that precious few can match or even approach. So why the Overkill? It comes down to numbers. With one clocking in at 70+ exits and the other just shy of 100, one has to ask when is enough enough? Is it possible to send an audience into anaphylactic shock just from too many ideas and too many repetitions of those self same ideas? Carolina Herrera refuses to subject an audience to any more than 45 looks. Her belief is that if the point can't be made in that amount, a barrage of 45 more looks isn't going to get that point across. Her feeling is that the audience will become bored and stop "seeing", which is very different from "looking". The lady has a point. Since when is editing a dirty word?

Valentino started out on a curious note with the first exit bringing to mind Pocahontas in couture. The suede, the turquoise beading, the fringe and the severely restrained hair all conjured a Native American vibe just this side of the derivative. It looked as though a character from a diorama took the side door and headed straight for the street.

From there beauty reigned in fantastic gowns bathed in prints engineered with the hands of the divine. Pleats abounded at once concealing then revealing contrasts, sheer panels and in some instances the most delicate lace. Long sleeved, covered decolletage almost reminiscent of a nun's habit, their sensuality was in the expert dressmaking and the unseen. These gowns that came at you by the dozens were statements of assured style, real live chic.

Maria Grazia Chiuri and Pierpaolo Picioli have leapfrogged to the head of the class with collections that propose the most modern romanticism in the formal and classically cool unstudied sportswear. Last season was an absolute day to evening feast for the senses. What woman wouldn't like great in their clothes?

This time around it seemed that there was too much sauce in the pot. Pocahontas changed into Maid Marion and then thought again and morphed into Empress Theodora. Though it only took her 15 minutes, it looked and felt like 150 years. From the back woods to Byzantium, that's a hell of a lot of changes. Too many to my eye. The technique on display was as staggering as the multitudinous iterations. Valentino needn't preach to the choir when it's a tent filled with converts. 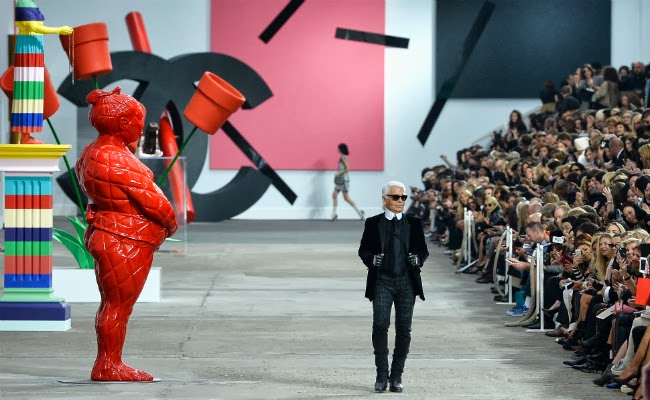 Herr Lagerfeld is another case in point. Chanel is the undisputed Queen of the County Fair. And for anyone who's not clued in it's time to leave the side show tent and head for the main arena. The bearded Lady and the 2 headed baby are fine if you like fakes (seems like the whole world including every major magazine, newspaper editor and store buyers and let's not forget all the pilot fish chasing after these fashion troop ships can't get enough ersatz) but the Queen who rules with ropes of pearls, a Boucle' jacket and swinging a chain-strapped, quilted bag is undeniably the main event.

It never stops to amaze me how many ways Lagerfeld can cut a jacket. This time he did something no one else thought of. With all this epidemic tossing of jackets over skeletal shoulders making the wearer and the worn look awkward and uncomfortable, he cut the jacket with rounded shoulders and a front that is little more than a band that rests across the chest. Imagine a cape without a front and sleeves that swing from the sides. Practical and eye catching. When Joseph Altuzarra was asked last season why he designed so many jackets and coats that rest only on the shoulders, his response was, "Because that's the way editors and my close friend Carinne like to wear them." Only his weren't cut nearly as cleverly as this. Karl encorporated this "new" jacket liberally throughout the collection paired with skirts, over dresses and as a part of dresses. Presto.

The delicately hand woven and embroidered Boucle' gets lighter and lighter until it weighs little more than the chain that encircles the hem. His skirts were almost all opened on the sides and a tabard effectively hung from dresses, tunics and skirts adding a layer without it actually being a layer. And it went on and on. Great bags like chic multi-colored Lego pieces and knits over trousers that had plenty of swing came in black and white and an array of rich pastel shades.

A personal favorite were exits 41-43 where cardigans were tied at the shoulder and like aprons at the waist in a color play of saturated pastels that were absolutely delicious. YUM with a capital Y. But by the 70th exit it really was something of a forced march. By the time we were looking at dabs of muted primary colors on chiffon dresses and gowns and separate pieces one after the other, all of them shredded, twisted and draped my eyes began to cross. I asked myself, "Just because one can, should one?" It was a similar situation that Mozart faced in the court of Emperor Joseph II of Austria. After debutting an opera commissioned by the Emperor, Mozart asked Joseph II how he liked the composition. Joseph II responded, "It's a pretty piece but there are too many notes." Perhaps I'm tone deaf.

Sometimes a little restraint doesn't hurt. With the outrageous cost of a Chanel bag, shoes, accessories or the clothes themselves there is a moment when too much is just that. Better to leave them wanting more than turning them off. At a certain point it all begins to look self indulgent and nobody likes a showoff, particularly one with a powdered pony-tail, too tight black jeans, high heeled boots, way too many rings and dark shades first thing in the morning. Even if he's old enough to be your grand father.

But, hey... I could be dead wrong. Just puttin' it out there.

Karl is doing a rehash of the " Memphis " style which he loved in the early 80's... He had done his apartment in Monte Carlo that way....Colorful...Children building blocks !
Good read ! More please...

"It never stops to amaze me how many ways Lagerfeld can cut a jacket. "

true that. he first gained notoriety for a coat designs when he won the woolmark prize in 1954.