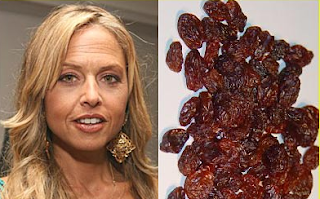 Watching last night's season finale of the Rachel Zoe Project, I realized that Diletantism has a new room mate. On the bottom bunk sleeps Dilecan'ts. That is about a 12-step program away from its big sister. The cliff hanger was more of a free fall. The drama and anti-climax of every commercial ridden scene was more and more uncomfortable to watch. Rachel is the definition of a train wreck, a pile-up of epic proportions. Her sourness seeps into every moment she's caught by the cameras. Even when she's supposedly doing good by her feckless workers, she looks like there's a dead cow decomposing just off camera. She is the Empress of the one-liner: Everything is F*** this and and F***that. Her emotions like her vocabulary stretch from A to B, and that's a huge stretch for her.

I guess because it's a reality show Rachel Zoe is in the middle of everything and every scene, whether she's doing something or in most cases in the midst of walking out. She does an awful lot of leaving for someone so busy and overwhelmed with the pressures of her empire. Eve 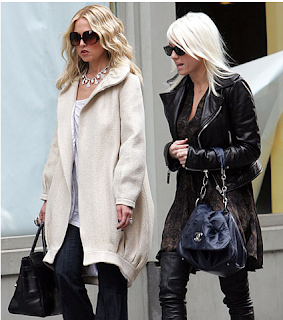 ry time she comes to the office, she leaves within 5 minutes. In this episode she styled a shoot for V magazine. That kept her in place for what must of been an eternity. Between shooting all of 5 or 6 looks in about 18 hours, all she did was complain about her headaches, nausea and vertigo. Otherwise, she was jumping around saying how fabulous she was, and also the shoot. The moment the last shot was taken she grabbed her battered Berkin , blew air kisses to the models and team and walked out.

Rachel with brain trust, Taylor. (above)

Where does she go, what does she do? I remember now. She had a Valentino party, another grueling trip back to NYC for her fragrance(Red Carpet or Road Kill, it's all a blur), her QVC faux-fur collection, and a quick trip to TJ Maxx to see if that's where she lost her mind.

Rachel's life consists of being tired, angry or ill. She tells us through a heart to heart with her father, who adores and applauds his baby girl, that all she wants is to be a good wife, boss and to build her brand. She's very big on branding. She excels at none of those things. Her marriage looks sketchy, her employees are just waiting for her to lose it and the brand is, well it's mutating. The only thing that looks real is her vertigo. She really looks like she's ready to heave in every scene. I was guess it's like reality , wholly false and a desperate cry for TV-styled pathos.

The greatest line of the evening besides, "these clothes look like s***", was, " I want my empire to be as big as Martha Stewart's". What she doesn't seem to get is that it takes brains, focus and commitment. Of these 3 she she has them all, but they're all skewed up: her brains are fried, her focus is myopic and she should be committed. The public loves a car crash. They all slow in hopes of getting a glimpse of blood and twisted metal. Rachel gives the public what they want. It's all the designer clad broken bones and flaming wreckage one can squeeze into an hour. 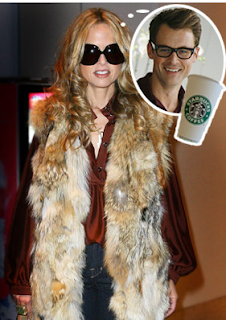 Her illness is manifested in her face through the course of the episode. It appears to swell, bags appear below her eyes and her mouth fluctuates between a snarl and a pout.Her husband begs her to take her doctor's advice and slow down but she won't listen.The result is this time lapsed aging we watch as though her face is the window of her neurosis.

Rachel with Brad, her spiritual support and the object of her addiction,besides fabulous Designer clothes. (above)

Rachel Zoe is the face of what's wrong with fashion. She's a female Dorian Grey who forgot to leave the truth in the closet and also forgot the bit about being charming and seductive. She's raw and crass. Did I say she was vulgar and selfish? Well, that too.

At the shows end when we all think that an intervention or the dissolution of her disillusioning business is going to happen, the plot twists in on itself. Husband Roger decides to take over her business, promote Valley girl drop-out Associate Taylor to take charge of the "branding and styling" ( the equivalent of handing a 6 year old a loaded Rocket launcher) when Taylor is late for every meeting, shoot , walks out on every business trip, complains of having to be Rachel's hand maiden, never getting anything she's been promised by Rachel and refusing to remove her sunglasses inside during meetings with said boss. Oh, 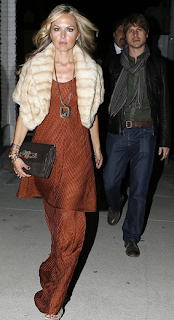 and she's challenged getting Rachel her Starbucks tea most days. Anyway, she gets the big promotion so Rachel can heal. Brad , the other key member of the team is either spouting superlatives about his legs in short-shorts, driving around L.A. in a big-assed Mercedes or clowning with Taylor on the set of the V shoot playing dress-up. Very grown-up. Very scarey, very over-rated.

Rachel with the man behind her, Roger; her husband and savior.(right)

I love the fact that the blind so willingly drive the blind at hair raising speeds. It's their special Hollywood brand of humanity. There's a sisterhood/brotherhood of the arch Poseurs there that makes New York look tame. I'd like to say we can all learn something from Rachel's example but I can't. This cliffhanger sent a message as large as the Hollywood sign:

If you find that you're a DILECAN'T, for God's sake, DILEDON'T.
Posted by Fluff Chance at 9:48 AM

thank you!!! finally someone dares to say how HORRIBLLL this show is. they complain for nothing, laugh in a very fake fake manner, they are so self-importance and they way they talk is so so like, OMG, like, I just, like, omg, what happened? I just like, wha????. yes, like that. True, I watch the show to reming myself of the terrible people I worked with in the fashion industry. I just hope that little girls or gay men in HS do not want to be them when they grow up.
This show is a joke, a very bad funny joke. Entertaining, yes 100%, making you believe that there are people like this in the world: priceless.

Bless you, and thank you dear cat.

Each episode proves they know nothing more about fashion and clothes than just dropping names, names, names. Picking out a dress for some doltish starlet is not creating anything tangible, it just makes you a highly paid personal shopper.

Rachel Zoe is odious, and we can all share the joy that this 40 year old woman (or does she claim to be 38) looks like a hard ridden 50 year old.

Ouch! Rachel Zoe an amateur? No way! LOL! I watched last nights show and honestly today at work we talked about the vulgarity that has invaded our lives. I hate to hear all of this profanity coming from people that it's sickening. I got the impression that this lady is a "Shopoholic" and she can give me one of her many Birkin Bags and a few Chanel bags to take off of her hands. How can you style others but be so insecure with your own fashion shoot? This scene really bothered me because she came off as afraid to give up control. She's coming undone right before our very eyes and it's not a good look.

I love so many of the shoes on Bravo... Flipping Out, Top Chef (Real Housewives- I hate to admit this... but I do!) and for some reason I have a STRONG aversion to the Rachel Zoe show. There is a steam of negative energy that emits from it- from the bad attitude of her female employee to the poor gay guy that can't stop crying to Rachel who looks like she need about 5 years vacation. You summed it up very well... good review :)

The bigger question is why do we even watch any reality show rather than live our lives and why do these people who have "great careers" need to be visually recognized as a celebrity rather than allowing their work speak for it self?

I find this Zoe woman to be a walking, swearing train-wreck. She is very obviously ill (I mean health-wise and not in an ill-in-the-head way) and the way they portray her and her assistants' "work" is laughable. But (argh!) her show is still so stinking entertaining; she just SWIMS in designer goods. *Sigh* I just have to remind myself it's all mostly fake.

As an addendum tho, I think the forces currently at work (economy, a changing of the guard in our culture) are going to radically change fashion and I have high doubts that RZ and her lot will continue to be relevant. (But what the heck do I know?) I sure hope that we (the wonderful bottom of the financial pyramid 98%) will become less obsessed w/ the reality stars and bloggers with trust fund bank accounts (ahem, we know who they are) and more interested in really nice, really well-made things that inspire us. I can only hope.

I currently live and work in Seoul and I admire your blog and delight in it daily. Thank you.
I can only access Ms. Zoe's "episodes" via youtube here and I can hardly believe how vapid she seems. She does look as if she's going to pass out any minute and the the way she fawns over the designers seems so highschool. I used to work for the largest modeling agencies in the world and I never experienced the vulgarity and overall emptiness (well, to a Zoe degree) that I see here on this show. If someone wanted to bitch and moan about their "hard life" then I'd just tell them to quietly leave my area as I was working hard on creating a book for them to get into that Dior show. They usually stopped sniffling then and there. They snapped back to life after that and realized how lucky they were and worked it like La Campbell on the runway. Ms. Zoe needs to stop cursing like a fifth grader and get to work. Let the work speak for itself.

Felicia, This Time in Seoul

"Her emotions like her vocabulary stretch from A to B, and that's a huge stretch for her."

that was my fav. part.

this is what is wrong with style in the usa these days.if actors are the impetus for fashion sense for us then we are truly going down the wrong path. rachel zoe is sadly a disaster and always looks like an unmade bed...crumpled and in need of ironing. for viewers to accept her bs and lack of sincerity.. i suggest a few years in europe refining, editing and learning how to dress. i actually think stylists in general need a reeducation...there is a lack of true taste level and proper breeding!
keep up the good work

...all that...and i still find myself watching the show. it's entertainment! ^_^