Too much is the same as not enough. Too much has been expected of Jason Wu and not enough is the unfortunate result. Jason, a young designer with promise has never had a chance to learn, grow or develop. The Obama Knighthood has thrown him head first into a world above and beyond his reach. That gown was a lesson in poor planning , but the world has spun so quickly since then, that he's never had the time to learn from it. Licenses, product lines beyond his dress collection and the expectations of the press have set him up for an audience expecting him to become the

instant heir to Oscar de la Renta. Well Oscar has yet to retire and Jason isn't ready. This collection is another example of Jason Wu's naivete as a designer on the large stage.

The Collection was filled with what has become his penchant for draping on cocktail dresses and evening gowns. The quality of this technique is inconsistent. It comes down to the draper/patternm 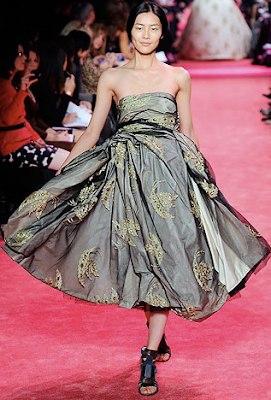 hard to say. The effects were not as much sinuous as they were awkward and heavy looking. Mixing these delicate ideas with big chunky sweaters and buffalo plaid coats was a reference to things Blass would do. Bill did it with panache and a certain brilliant eccentricity. Jason's attempt comes off studied and leaden. The brown hose and orthopedic looking open toe shoes added little to the look. Bubble trapeze dresses, all sorts of draped gowns off one shoulder or twisting around the torso were well meaning but left me wanting more. Not more to look at but wishing that what I saw was better.Another group of dresses were gold leafed. The fit was tentative , but the idea was lovely. When the fashion world looks to you as the great white hope you need to do your best to satisfy that expectation. Focus on what your talent is and take your time trying to be all things to all people. Most of all, take your time with expansion. Those opportunities tend to come once. It would be ideal to be prepared the first time around. You rarely get a second chance.

ang escapes me. I know he is a Fashionista favorite and a favorite for all those who know all of the models by name. Though his claim to fame are t-shirts he is a designer with greater aspirations. There was a Wall St. vibe that ran through the collection in the form of ill

fitting, clumsy deconstructed suits in uptight striped suiting wool. The pieces were much more school project busy than directional or compelling. It looked more like an exercise in attempts at cleverness. These clothes were designed to play to the front row: Stylists, editors, celebs and party crashers. Natalia Vodianova opened the show looking uncharacteristically unattractive. That takes some doing. In fact, most of the models were really ugly. I imagined them being instructed to collectively spit on their hands and smear it on their hair . This was so effective that everyone looked like they'd used axle grease as gel. Ugly is the new ugly.

Bell bottomed leggings, chunky heels one side, single sleeved fur boleros were some of the accessories. Suits that bared tummies and buttoned to just cup the bust were just some of the day looks. What was surprising

and new and very well done were a group of dresses which were draped and pleated in chiffon over one side of the torso and paired with velvet or silk crepe satin. Another black beauty was draped in matte jersey.These were cool well executed and unique pieces. They were a unexpected and welcomed addition. Maybe I'm not getting the cool factor that flows through the veins of Wang, but I keep looking. But, I'm getting restless and impatient. Baby, baby, I can't wait.
Posted by Fluff Chance at 2:45 PM

The video for Wang looked much better than those stills. I wonder how camera angles, movement etc change things?

Dear Fluff...all I can say is Thank you...as a "aging" read 28 yrs old designer, I am constantly bombarded with Q's about why I don't have my own line after all I'm aging out of the wunderkind age....this is why. I'm still trying to find my "view" and style. When I'm ready, then I'll present.. after all you only get 1 chance to make a 1st impression.

Fluff, you always provide such a refreshing take on Fashion. It's inspiring to read someone's point of view who isn't burdened with pleasing others, but is just...honest.

It is such a pleasure for me to read your blog as I always find there my own rambling thoughts and you always manage to make them sound convincing and well-grounded. I learn something from you and this is how to express yourself properly and not sound like a hater or a schoolgirl. Thank you.

"I always find there my own rambling thoughts and you always manage to make them sound convincing and well-grounded." I agree with Kseniya.
And Wang is not such a talent... this looks just like a fashion student show... that's not bad, it is just not enough.

i've been an avid reader of your blog for quite some time now &i have to agree with the other commenters on this post in telling you what fantastic content you have on your blog. as someone who is an english &journalism major &wanting to work in the fashion field in the future, your blog has really been an inspiration.