This collection got lots of rave reviews. Cathy Horyn of the New York Times cozied up to it and its Boho Chicness. Press and buyers liked that aspect as though that signaled its youthfulness, its Now-ness. The mad mix of luxe details like abstract tile embroideries throughout and many running along the bottoms of pencil skirts with Nutria borders framing the hems. This was paired with sweaters or double-faced cashmere cardigans under Alpaca coats in colors like cerise, grape, or burnt orange with 2 different furs running along the collar's edge and hem. Silk dresses were cleverly printed with an Astrakhan design. Fur look under fur. That's a bit of gilding the lily in my humble opinion (IMHO). Glamor coupled with luxe paired with the precious all floating on a sea of audacious colors. This all sounds perfectly brilliant, a new dawn for the tender loins of

Park Avenue, perhaps even a reason for the Jaimee Gregory's of that rare

fied world to cease their insipid grimace of a smile and go YUM, but to my jaded and jaundiced eye it looks like Tuleh (now shuttered) on steroids; the sort you get slipped in the back of the locker room buy a sinister trainer....one that should be smacked with a restraining order.

Some of you may think that I am using this confused collection as a scratching post, but I'm not. I had a manicure that day, seeing as though I made a promise to myself I'd go with an open mind to everything this Fashion Week. Out of sympathy for the fact that the era of the Tents is finished at the Park known as

Bryant, I want to show my solidarity with the Tweeting hordes who make up this pilgrimage that's more popular than the one to Lourdes according to the WWD. So I'm just doing what I do, I'm calling it as I see it. What I saw and heard (I tried that new ear candling treatment so I could better hear the hyperbole flying to and fro) was baffling. Dresses that once were the smartest examples of sh

ape, detail in seaming and attitude were flat, less shaped, or just a robe of wool cashmere flannel wrapped and belted like some throw away bathrobe, I mean, Kimono. This willy nilly tossing of a sharug tunics over fab

pants with an indigenous necklace from some lost culture was Oscar's attempt to give Rachel Zoe one of her trade mark seizures. The type where her eyes run and her nose bleeds and she becomes covered in a glaze of greasy sweat. So many looks early on were mired in too many combinations of disparate items adding up to a "Vintage" look that was bought at the costliest Salvation Army on the planet.

I honestly have loved Oscar's collection over many many years but the last few seasons have shown a detour from elegant, young and super exquisite clothes. I actually did the unspeakable one year and silently wept at the end of the show. That's how deeply I was moved. This was a spring collection that Carmen Kass opened in the briefest pleated tennis skirt and cashmere cardigan over her shoulder followed by a parade of super beauties all in similar looks

running the gamut of the color wheel. The sound track was The Thomas Crown Affair. There were perhaps 4 or 5 Ho-Hums in that collection and the rest was pure magic. Well, those days are past. Or, as long as the stylist he now has remains on the payroll, we're not going to see any of that artfulness or sophistication. The look now is heavy, retread and flat. It's a study of the obvious, perfect for Nouveau Riche trophy wives and the Russian Mafia. All fabrics are super precious , encrusted with embroidery and suffocating in fur on top of fur for good measure. Lengths are below the knee and all in all the overall picture is over crowded and dec 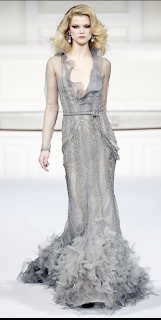 The gowns at the end are where the beauty lies. Still very rich with detail and surface decoration , but languid , glamorous and perfect. One gown the stylist defaced with two too many diamond clips. It was as though she was unaware that elegance is refusal....WHAT? I have a strong feeling that a lot of the forced and obvious looks that start the show are the work o

f his team, but the evening looked more like his hand and eye. There are only a few designers left in this country who have the experience and taste to truly create beautiful and wearable clothes that remain within the realm of the valid and actually justify thei 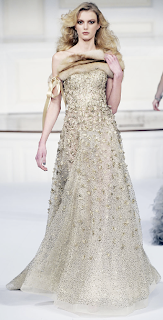 r steep prices by their quality. He has always been at the head of that ever shrinking pack. I feel now that he's fallen victim to the whims and confusion that is his upper management and the assistants who
contr 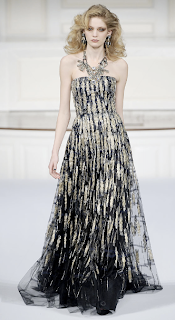 ibute ideas and their translations of the zeitgeist of the street.

My view is perhaps an unpopular one, but I take no pleasure in seeing my heroes fall victim to age, time and faltering judgment. The same truths apply to them as they do to the young and inexperienced:

" Just because you made it, doesn't make it great".

Potographs courtesy of Marcio Madeira/First View.com
Posted by Fluff Chance at 9:17 AM

As a not-so-young, but very inexperienced wannabe designer, I am very glad to have the opportunity to read your critiques as well as Ms. Horyn's. I have always been confused by the overwhelming number of plaudits that most designers receive for collections that I personally consider to be competent, or simply ok. After viewing Mr. de la Renta's collection on style.com, I too felt that there wasn't anything special about the sportswear component and was equally confused about Ms. Horyn's praise. With the number of true masters dwindling or relying too much on younger assistants to create designs that will supposedly capture the imaginations of younger clientele, what are neophytes like myself supposed to do? Who can we look up to these days? Who can we truly learn from?

I agree with you.
I'm disappointed with this Oscar de La Renta Collection. The looks are heavy, and lots of fur... the make up too heavy too. Styling and not just that... the girls don't look stunning as in past collections... and the clothes are flat. I'm sad. Oscar is a master for me, all the couturiers are disappearing... he is one of the last emperors. And I'm sad about that.
Also at Marc Jacobs... that neo-grunge collection, with flat pieces and too much fur. What these people are thinking? What about the animals? Why this? Fashion people should be thinking about the future...

the tulle gown with the sequins reminds me of one he did years ago..we called it queen of the night...good runway but repetitious...aretha franklin wore it on stage at radio city.
me thinks he needs a new crew designing.

have just been playing catchup reading the last few articles you just HAVE to get a post with some major rag... these are really amusing and very meaningful takes fashion week. bravissimo gato!