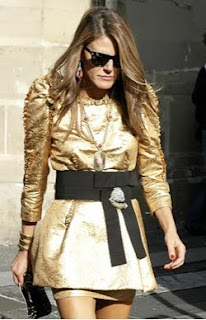 Ok, I know she's the editor of Nipon Vogue, style icon, and personage. She looks old enough to have been around the block frontwards and backwards more than just twice. She ranks up there in the upper regions of fabulousness with the likes 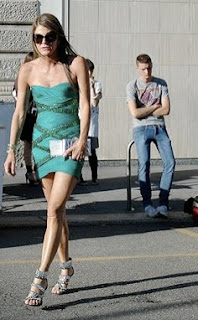 of Rachel Zoe, Carine Roitfeld, Anna Wintour and Beyonce and other pretenders to the throne. I know she is unhealthily absorbed by fashion and spends the better part of her life planning, dressing and changing her "looks" on an hourly basis. This creature lives for fashion in the time honored tradition of a Daphne Guinness, Isabella Blow and Anna Piaggi, among others who are more or less dead or dying. She's a moth who's hovered around the flame for years but only recently has taken to dive bombing kamikaze style directly to into its glowing center. What I love most about 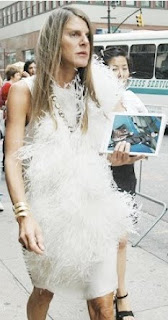 these types are their innate absence of beauty, their sterile, rote approach to style (looks that are straight off the runway or total hashes of said looks) and the insider Sheepanistas who slurp up the slime trail that follows their every move. The narcissism necessary to put all of ones efforts into ones appearance in order to command respect, attention and a paycheck is still a paradox. So many of these pictures are testament of a certain lack of joy. It all looks more burdensome, embarrassing and tedio 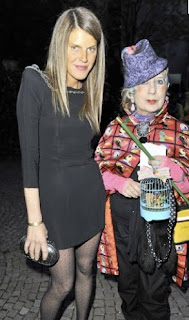 us. The images with Carine Roifeld are particularly jaded and lifeless. These girls have taken the Twilight Saga to heart.
Anna seems to care more about the care, maintenance and proper packing regimen for trips to fashion weeks than to the quality of life of those around her. Living ones life for the sake of a Sartorialist photo-op is a life unexamined.
As she has been ever more steadily a moving object on the radar of fashion, I've taken increasingly more notice. Her appearance at the W magazine offices meeting with old friend Stefano Tonchi with consequent rumors of her taking a job there

away from some poor quivering masthead member was yet another day on the job. Show up in an ill advised Chanel suit, way too short with big glasses and huge equine jaw ready to pose for the camera is certainly all it takes to get tongues wagging and job security fears spiking. She created her own Style Quake in Milan in a see-through lace jumpsuit, all toothsome with ginormous sunglasses. What is it? Who is she?
Now she's gotten it into her head to put out a perfume in a bottle in the shape of a spiked high heel shoe. Yikes. This brain fart all came about due to her having been told she's an international style icon, a leader of the people, a personage of grave consequence. I think its called "Blight" or "Trite"or actually,"Beyond". 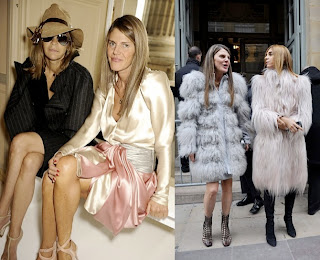 Whatever it is, I'm saving my pennies for some Fantastic. At least it's useful around the house in a multitude of ways. Why put hard earned unemployment checks into the hands of someone who clearly has too much to know what to do with? Isn't there a conflict of inte 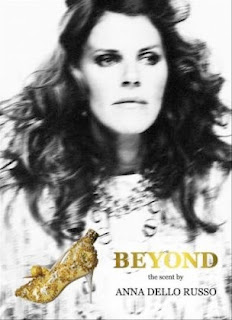 rest if you're putting out a perfume and are an editor of a Conde Nast imprint? Is everyone and her cleaning lady gunning for Anna Wintour's job? When these characters surface I'm reminded why I write this blog. This Empress is stark naked!
Whatevahs!

She reminds me of John Tesh.

Worst posture evah!! She looks horrible in all the pictures.

Thanks. I thought it was just me!

Well..well..I happen to think she is fabulous! Believe it or not I actually like her work. Go to her blog and she shares her work.Right now,in my opinion, Vogue Nippon is the best vogue out there. I love Its unpredictable style! For example, placing photos of old Hollywood icons along side Josephine de Beauharnais under muses of femininity, and which other Vogue pairs Vintage valentino with Junya Watanabe?? I wish I read Japanese!Age jokes aside, come on..she is VERY fit! I say BRAVA ADR !!

It's about time someone called out this, well this trifle! I've never understood why she's been anointed an "icon" I agree that she's ghastly! I much prefer Carla Sozzani. I think her style is modern and refreshing and not a whiff of the "look at me I'm fabulous" fart the rest of those creatures reek of!

Calculation ain't pretty, but it does seem to get you places.

How are you Fluff? Apropos of nothing, am wearing an old McQueen t-shirt, new Uniqlo skinny combats (VICTIM, moi, but they're not just trendy but incredibly comfy), and cheap-as-chips Miss Selfridge cuff sandals. How about you? How are the horsies? xxC

Thank god you called her out. I am saddened that this woman who makes women look very silly has received the plaudits that she has. She is fairly hideous both in physivcally and spiritually.

she is simply heinous... every single time.

Hmmmm... Wow! I love your blog and always appreciate your comments. This time I politely disagree: ADR is following her bliss - we all aren't meant to ponder the philosophical questions of fashion and clearly that doesn't interest her. She makes me smile! Wasn't she fired from L'Uomo Vogue for accepting payment as consultant to some of the design houses and then rehired by Vogue Nippon because of her many high-profile contacts, etc.? Sounds like smart (albeit sometimes unfair) business to me. I won't be buying her fragrance (no interest in scent of vanilla and almonds) and somehow I think she knows her intelluctual limitations. Anna Wintour's job is safe.

Hmmmm... Wow! I love your blog and always appreciate your comments. This time I politely disagree: ADR is following her bliss - we all aren't meant to ponder the philosophical questions of fashion and clearly that doesn't interest her. She makes me smile! Wasn't she fired from L'Uomo Vogue for accepting payment as consultant to some of the design houses and then rehired by Vogue Nippon because of her many high-profile contacts, etc.? Sounds like smart (albeit sometimes unfair) business to me. I won't be buying her fragrance (no interest in scent of vanilla and almonds) and somehow I think she knows her intelluctual limitations. Anna Wintour's job is safe.

Ugly and miserable looking. You nailed it.

She sucks all the joy out of clothes.

Eric, are you sure that you haven't put a saddle on her for dressage riding? Ugly, old, and very horsey.

"old enough to have been around the block frontwards and backwards more than just twice", "equine jaw", "ugly", "old, "horsey", "hideous both physically and spiritually", "simply heinous", "ugly and miserable looking".

Every one of the quotes reproduced above come either from your post or from your readers' comments. What on earth has this woman done to deserve this kind of vitriol and venom? She lives for fashion, so what?

She's a fascinating subject to examine and comment upon, no doubt. As a public figure and a fashion editor, her personal side projects, potential conflicts of interest, etc. are all absolutely fair fodder for your cannon. But can you explain exactly what her age or "equine jaw" has to do with any of it? Is there no other way to legitimately critique her actions without attacking her age or her physique?

I know of no one who is born physically perfect. Some have more to work with than others but we all struggle to come to terms with our bodies, our looks, our appearance and we all age. We live an era of cosmetic surgery and artificial beauty. I rather admire the fact that she accepts and loves herself enough to use fashion rather than a scalpel to enhance what God gave her.

Frankly, I find the overall tone of this post and the comments it inspired far more disturbing than anything Anna Dello Russo has said or done.

Hallelujah!!!!! Good lord, SOMEONE on the face of this earth has common sense enough to actually say it - Anna Dello Russo looks absolutely ridiculous, all the time.

I saw a disturbing picture of Anna on some fashion blog, wearing a giant cherry on her head. And every single one of the comments were like, "omg, she is so chic and fashionable!". Is everybody blind? She looks ridiculous. She is the ultimate fashion victim, and I'm not even accounting for the fact that she's probably in her 50s wearing things that a 20 year old would look goofy wearing.

The disconnect between reality and what people say about her style just bothers me. If people just looked at a picture of her, and didn't associate her with fashion at all, just pretended she was some person they saw on the street, I'm pretty sure they would say to themselves "wow, she looks really awful! Mutton dressed as lamb!". But because she is associated with the fashion industry, suddenly she is transformed into a daredevil risk taker, and people look up to her.

It's because people look up to these ridiculous fashion "insiders" that no magazines today have style that we can translate into real life. If we would demand that our fashion icons actually looked GOOD in their clothes (and they don't have to be young, or a certain size or shape or color either, just dressed well for their particular situation) maybe the fashion industry would get a clue and start providing us with more clothes that really work, and better inspiration in magazines and blogs than "here's Anna Dello Russo wearing a silly hat"

I thought I was taking crazy pills recently when she was featured in a magazine article about skin care treatments as looking "fresh and great" for her age along women who really have beautiful skin and don't look like they are 15 years older than they actually are. I was stunned...her skin is the worse thing about her. She looks like she smokes 3 packs a day and never wears sunscreen. Totally overrated and never understood the appeal...

she needs to give it up and RETIRE!!

thank you! this woman always looks hideous - i think she might even have health concerns. she certainly doesn't have any fashion concern - except how she can utterly ruin any outfit she wears. she obviously has no fashion sense - how can you explain it otherwise...perhaps this is a case of, do as i say not as i do. yes, it's all about, look at me - anything for attention, no matter how unsuitable, or just bad.