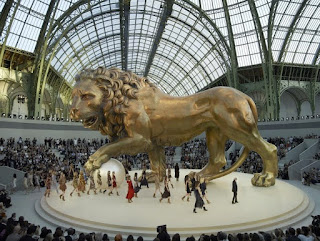 Scale is everything in life. Big dreams, big hearts, and big, bold statements. Why should fashion be any different? Karl Lagerfeld lives by this dictate and by extension so do his collections for the House of Chanel. The Fall2010 Collection, recently shown at Paris’ Grand P

alais, by no means a modest venue, bore out this idea on a truly enormous scale. The set was a circular stage with its main prop a humongous bronze lion with its paw resting on a globe. The “globe” w

as in fact a pearl that stood at least 15 feet high and appeared to be the portal from which the models emerged. As Mademoiselle Chanel was a Leo, this was an homage to her ferocious talent, spirit and place in the pantheon as one of the most influential designers of the 20th century.

The Collection, which numbered approximately 70 exits, was enormous

in its size. Karl may be many things but prolific is at the top of the list. Colors were darker with lots of navy, burgundy, loden and camel. Th

ere was very little black and most of the styles were either trimmed in velvet, crystals and Russian sable. He introduced a shoulder more pronounced in it’s roundness and many, many pieces for day and evening were multi-tiered, layered and fell to the knee or a few centimeters below. There was not one evening gown that fell to the floor. Not a single one unless you consider the bride, the final exit on the arm of the ubiquitous Baptiste complete with a lion’s head mask. That paillette and embroidered knee length dress had a panel of embroidered tulle, which fell from the edg

e of its bolero and trailed along the ground behind. For the Couture to abolish gowns altogether was just one element of this audacious Collection.

The whole presentation had a feral quality within its confines of propriety. The quaint notion of rules have no place on this stage. Lagerfeld has effectively wiped that notion away with a grand swipe of that BIG Kitty's paw. For day, which included suits of crepe, wool boucle and grain de poudre, to embroideries invading tweeds whose collars, cuffs, and hips framed in bands of Russian sable, it was a display of the extraordi

nary technique of Chanel's petit-mains. The almost subversive attitude of the clothes gave them an immediacy that echoes the times we live in. Granted, we’re talking uber-Luxe, the clothes remain in

step, or some steps ahead. Nothing about this Collection felt like pure fantasy. My feeling was more of a dream for this moment, a fashion with heightened expression for a modern woman to wear. Evening was in this similar vein but with the added richness.Glistening p

aillettes, Sun King embroideries of beautiful blossoms, and layers tulle delicately embroidered or appliquéd with abstractly draped flourishes of contrasting iridescent mousseline adorned abbreviated jackets and dresses. The hair and make-up for the models was deliberately off handed and wild in keeping with the leonine mood. All of the girls wore a slouched high-heeled boot that went from the simple spectator to completely covered in embroidery complimenting the dress she wore.

I won’t pretend this Collection is for everyone. I could have happily done without the boots. Many shapes would challenge a woman of any age or figure typ 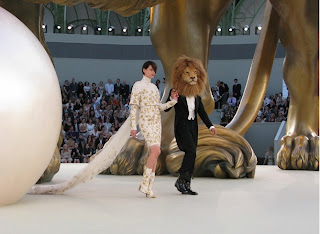 e. I will say that the spirit of Coco Chanel with her ferocious energy, vision, and exquisitely original imagination is alive and well in the hands of Lagerfeld. There may have been fewer Couture shows this season than in the recent past, but that's life. I chalk it up to natural selection. These are tough times and not every house is up to such a costly task. It does not mean the Couture is breathing its last breath.As others sleep, Chanel by contrast, is wide and wildly awake.
Posted by Fluff Chance at 10:17 AM