The "Dark Side"? Yes. But what has love or, heaven forbid "First Love" got to do with it? Honestly, I think more time, thought and effort went into the title of this "line" than any actual imagination. It was more a bit of an "8 Easy pieces" formula swollen to the size of a beached whale, than anything else. I won't say there weren't a few memorable numbers along that rutted path, but in general it was a mosh pit of sameness re-cut over and over in the same fabrics,only different colors. That's giving it a lot of credit when you'll see that the fabrics consisted of gazar, chiffon and a bit of beaded lace. The colors ran from black to red, a soupcon of ecru and white. I was bowled over with the mind numbing range of color. The real news were the shapes; cl

assic "couture" shapes that referenced the greats of the metier from Balenciaga, YSL, Givenchyand a touch of Nicholas Ghesquierre

. No references from the vast Valentino archive were in evidence beyond the signage and the labels within.

Baby Doll dresses with their empire waists and tiered flounced hems were the details that ran amok throughout most of the styles. A very Ghesqierre suit in stiff armored gazar, all flat, hard planes was a stand out in Ecru with it's booty baring mini skirt. The lengths were very short on most cocktail dresses which gav

e it a very Gossip Girl relevance, but it is unlikely that many clients will order those pieces without adding a good 25 centimeters to the hem. Kitten heels were the shoe of choice, all with cloying bows placed to the side of the toes or with dangling feathers. That same saccharine bow turned up 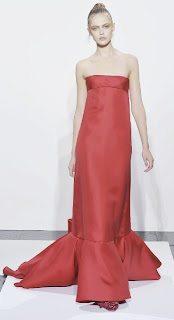 as wrist adornments on too many dresses. I got

the feeling that the budget was extremely tight on this outing. Little or no impressive accessories were anywhere to be seen and there seem

ed to be a rationing of yardage allowed for dresses, gowns or excitement.In the first 5 exits two of the first little black gazar dresses appear to be the same dress until you see that one has a single flounced hem and the other has a double. I honestly looked at both half a dozen times before I saw the difference. This happened with other styles, namely a very pretty red bustier cut with an empire waist and straight skirt, the other exactly the sa

me only this time with a flounced hem. It came back one last time near the end, again in red, but now with a skirt to the floor with the requisite flounce at the hem. It was a very pretty gown, but didn't elicit much response having seen it grow and mature from the beginning to the much anticipated end. The black chiffon dress with the growth all down its front was alarming in its way. Scary biscuits, that. The shapes kept being repeated again and aga

in. One moment in gazar, then next in lace , then once more in gazar with the only difference being a change of color.....some of the time. The "Caged Bird" number was particularly camp, but it's counterpart, all ecru satin piped corseting with an inverted tea cup skirt was perhaps my favorite of all. I will say that Maria Grazia Chiuri and Pier Paulo Piccioli (they even share the same number of names) have improved a bit since last season's rampage of the ruffle, and this definitely had more chic and refinement. But with a house of that stature, with a history of magnificent workmanship, imagination and glamor, it felt very West 35th street to me, 35th closer to 9th Ave tha

n 7th. When a designer operates on a limited budget and limited technical resources, she/he tends to find a few great shapes and plays them for all they're worth. It's economical and understanda

ble and even forgivable in the eyes of retailers and press. It's a simple question of a limited budget. When that sort of output comes from a major international design house, one is forced to notice, question and ultimately groan. Each outing of these two accessory designers makes me wish for the good old days (2 seasons, but hey, 2 respectable ones) of Alessandra Facchinetti. That designer had a vision that was clearly matched with taste and imagination. These two remain unknown 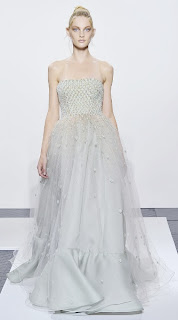 quantities. The parent company must be biding their time til they can unload Proenza Schouler and any of their other holdings before they drop the curtain altogether on this collection or just throw up their hands an hire Rodarte. If this is their idea of sublime, I say go for the ridiculous. 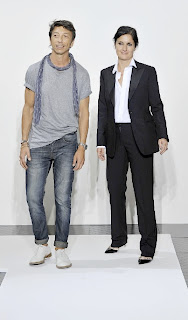 Hell, give me the scissors, I'm rested,rejuvenated and ready for battle......
Posted by Fluff Chance at 8:08 PM

I don't know what to say....this is insane, have they lost their mind.....I am baffled... Fire them all, and today is Bastille day, so, to the guillotine !
Thanks for showing Mabillion, he is interesting, he has got some pretty ideas. Sweet and Pretty is good.