The Audacity of Taupe. 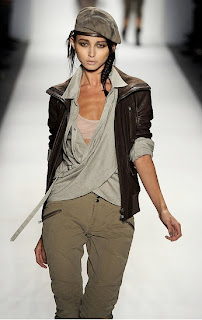 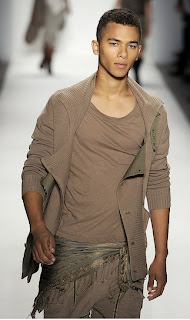 Hurricane Earl narrowly missed us but another looks to be beating a path straight towards NYC. It's the beginning of the new and improved Fashion Week for Spring2011. Lincoln Center is the new turf for a war that appears to be already in full escalation. 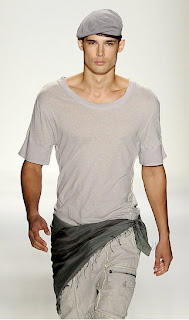 Urban warriors have taken to the stark, crystalline runways for an assault on the Old Guard. It looks like a teen army of androgynes all in shades of taupe, grey, silver, khaki and steel have taken control of what used to be the territory of older Generals. If the collections of Nicholas K and Richard Ch

ai are any indication of what is to follow we're in for a changing of the guard. These collections presage a shift that just may alter the battle 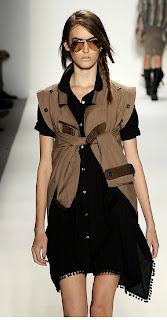 ground of American fashion. It's looking like a turf war that only the truly fearless or in some cases, the clueless, would engage in. These are not clothes for Rachel Zoe (they're WAY OVER her head), Red Carpet Rangers or the idle Rich. They are the uniforms of their kids. It looks as though a wave washed over the collective psyche of the Stylish leaving them with a new set of demands. Guerrilla gear for women and men all in tactile jersey, reclaimed cotton, linen and farm raised leathers and all dipped in vegetable dyes are layered and mixed creating interchangeable wardrobes.
There was something very seductive about Nicholas Kunz's collection for women and men. Though I was initially 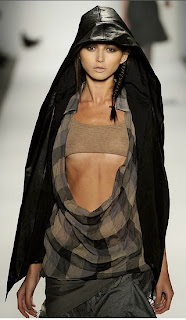 skeptical watching the first exits all in a melange of greys with crotches of yoga pants knocking the boney knees of the models who were layered in draped T's, languid shirts and endless windbreakers, I involuntarily fell into t 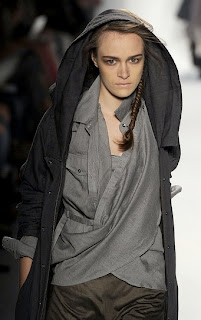 he groove. What looked like reconstituted Army Navy duds with a mix of Moroccan 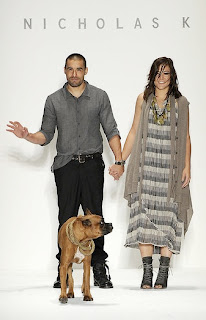 tops and bottoms came into focus as something more subversive. It took on the look of a new and improved vocabulary based on the somewhat archaic teachings of DKNY. The words are all there but the language has shifted creating a new poetry. I don't say that lightly...it was poetic and it spoke volumes. Almost everything worked and it worked as well on the girls as it did on the guys, which is rare. That is no small feat on the part of a designer who in past seasons has been busy working up to this point. Not that much is said about this collection but in contrast Richard Chai, about whom much has been written came u

p a bit short. The mind set was very much the same but the final result didn't 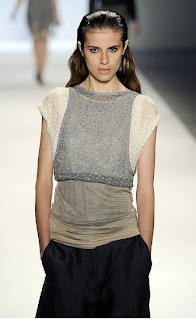 have the mastery of Nichola 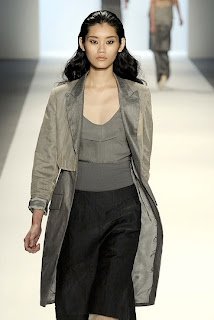 s K's. This invasion of Upstarts is hyped to the rafters as is the Age of the Blogger. I find it all a bit exaggerated and just fodder for a puerile Press. Chai's collection was just as youthful, there seems to be a shif 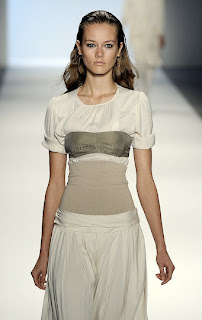 t to the Twenty-Something crowd, but ultimately flat in its delivery. There was a decidedly Young Designer aspect that was very simply that; the work of a young Designer. It didn't measure up to the level of noise in the fashion comm 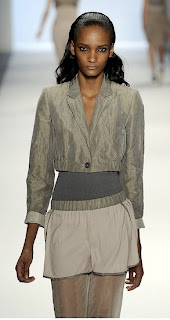 unity that he has garnered in recent months. Metaphorically, it was a lot of grey parading as taupe. Layers and layers of tissue linens and liquid jerseys were interesting in their combinations of tones and volumes but still a bit shy of nuance. I found myself coming back to Nicholas Kunz who was successful in all areas: accessories, the boots for that shod both sexes, and the clothes which I loved. I ask myself if these clothes can be worn by adults and I've decided that they can and they should.
Lincoln Center is looking like a set for the future. One look and Bryant Park is forgotten. If only the Old Guard would take a cue from today and "LOOK ALIVE".

images courtesy of Getty.
Posted by Fluff Chance at 5:24 PM

Normally I think your judgment is impeccable, but I found both these collections deeply uninspiring. They were exercise clothes styled to look like something and put on the runway. Not what I'm looking for.

Gee where were you, I thought you had given up...
I like the Taupes and Greys , pale Roses...(Rose Indien)
It is soft and pretty and calm, I need calm...I am glad to see you in good form.