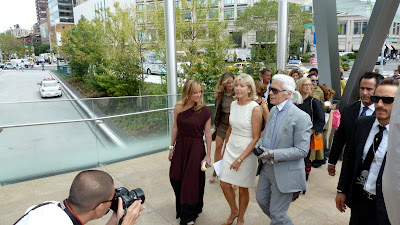 Immediately following the Duckie Brown show yesterday, I walked out into the blazing light of the plaza at Lincoln Center. It was a very interesting space compared to the spit of sidewalk just beyond the entrance to Seventh on Sixth of last season. This new venue is as grand as the tents that have taken over Damrosch Park. Everywhere you look you see the monumental theaters that make up Lincoln Center and feel a different energy buzz of the Upper West side. I really like this new stomping ground. It seems that it is a very effective stage for not just the shows but also for the silly floor show that is the "Fashion crowd".

There were so many characters standing around the fountain preening and posing for tourists, the ubiquitous camp followers and bored photographers. Every time I see that guy with the home made eyebrows and the beauty marks along with his garish suits and absurd hats, you MUST know who I mean, I'm reminded by his now famous line on that ill-fated reality show. When asked to go find inspiration and figure out the trends of Venice beach for some inane design "Challenge" he whined, "I don't follow trends, I set them!" Well, each and every time I see him I wonder exactly what trend that is? He was with 2 other older men who were as exaggeratedly attired as he, so I stand to be corrected. Maybe he does set the trends, one dandy at a time.

I was walking and talking with John Bartlett as we passed through this vapor trail of glamour. We were taking the measure of the good ship MBFW. She is definitely jumbo-sized and not for the shy or the fiscally challenged. You must have money or some corporation behind you to pay the price of admission. If you thought it was expensive before, it's even more expensive now. You get plenty of bang for your buck, but what one puts out on that runway is held to even higher scrutiny than before. In one sense, everyone gets a pass when you consider that many in the audience are too concerned with what they have on to notice what is marching before them. As sleek and shiny as this new set is you can't get away from the sinking feelings that must go on backstage for many of the designers. They can't help but feel the tug of emotions that come with epic anti-climaxes. They work for months for what amounts to 10 minutes of glory and then it's all a memory. Granted, that moment is streamed live all over the Internet, it nevertheless is fleeting. Unless you hop a plane to Santo Domingo to your palace by the sea or hit your oasis in the Turks and Caicos for a bit of Ohm-ing it can be a bit crushing and almost impossible to keep that high spiking. Even the heart stopping magnitude of FNO is not enough to take the edge off. Perhaps a sighting of someone way larger than life like, maybe, Karl Lagerfeld strolling by with a gaggle of Ladies and a horde of cameras flashing can do the trick. Well not really but it was enough to take my mind off things for a good 5 minutes or so. Hey, it's not everyday you see the Kaiser a few feet away. He looked sort of nice in an interestingly severe way. His suit and tie were extremely refined in an extreme sort of way. I couldn't help but feel that the guy in the loud suits and the out of control eyebrow pencil wasn't the trend setter he professed to be. He was just copying Karl and still getting it wrong.

Look at eh "European" bodyguard to the right of the photos...is that a skull and crossbones on his tie? Do you think Karl has a dress code?

FAB post...glad you are there to give the real dish on wha tis taking place. Best to John B too.