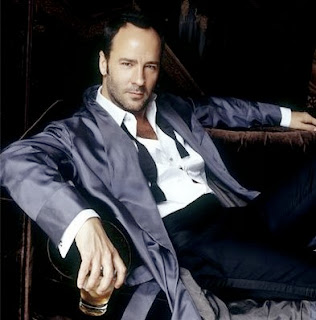 There's something to be said for a collection that everyone and his mother wants to see but can't. On top of it there's a lock down on all images and descriptions thanks to a confidentiality agreement. What can I say? It sounds mighty cool. The little that I heard and saw sounded like a very rich and luxurious dish. Fashion is and will always be made up of a bunch of cool kids in the playground with dibs on the swings, teeter totter and even the sandbox whether it's filled with sand or mud. Perhaps, things have gotten a bit too open with all this technology and people busting down the barriers. It seems like Tom Ford took a look at how things are and decided to turn the game around. This controlling of the front door and keeping images of the collection under lock and key has done what all this easy access has fa 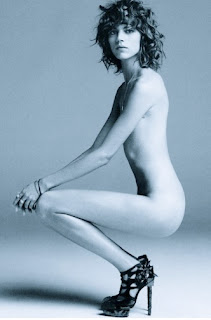 iled to do. He's restored an atmosphere of anticipation, excitement and desire. Like debuts of collections in the past, his was an invitation only affair for a very few leaving the rest of us clamoring for a peek. What's really funny is that most will probably site this collection as being the best of the season though no one except 100 people actually saw it. I have a feeling this may start a trend towards smaller, more tightly controlled environments. :It's a game changer that will have an interesting effect that we will have to roll with. Coolness will be a much more competitive game. What I like about this prospect is that it will hopefully be more about quality than quantity. Designers will have to work harder, dig deeper to live up to their new found exclusivity. It's ironic that just when you thought you had a handle on the new rules of the game, they're changed again.
Posted by Fluff Chance at 6:31 PM

so true, thinking of early YSL, BALENCIAGA in the day.
"Fashion is and will always be made up of a bunch of cool kids in the playground with dibs on the swings, teeter totter and even the sandbox whether it's filled with sand or mud." wow-wished I'd said that! pgt

about time!
sure, WE get left out and have to wait fro the crumbs that fall off the table after the "inner circle" has had a fine feast but, shows were getting bloated, incredibly expensive and, in some cases, vulgar (as in no substance just flash).
It's nice to hear that he used several different types of women to showcase his designs. After all, his real clients wont all be 15yo starved to death clothes hangers.
I'm glad he saw fit to keep the show for his real clients not just the celebutante du jour and entourage and hoards of wannabes (that would NEVER purchase his garments but would buy the knock-offs and pretend)... there's a reason people still talk about Studio 54... it's was always about the power of the velvet rope it created the mystique and allure like no other.
Also, I might add, that in this age of instant communication he is ensuring that his designs wont be copied by the time they hit the stores!
By the time the knock-offs are made it will be too late... Brilliant.

Can't wait to see TF's collection, and that he hasn't given bloggers a front seat invite. Present company excluded of course! MsGolightly XX

I for one don't give a damn about Tom Ford, and I think it's laughable how willingly the entire fashion world plays his game. Either he's smart like you say, or fashion is simply predictable.

I find Tom Ford utterly inspiring and I'm thrilled with your post about how he's keeping things under wraps. When everything is accessible for everyone's comments and opinions (often uninformed) too soon it dilutes the experience. I think he's one of the most creative minds working today in fashion –or film!
Thanks for sharing!
Style Defined NYC