What happened? Where did all the momentum from the last 5 collections go? This concept car of a collection was rocketing to the stratosphere and then poof, the gears got jammed in neutral. Is it the Toyota effect? Did the collection move too fast and far, that it jumped the median and got creamed by an oncoming bus? Or did Tomas Maier just change his mind, and pull over onto the soft shoulder and decide to take a.....nap? Whatever he decided it was a disappointing direction he took this season filled with scenery that was both derivative and redundant.

These criticisms don't come easily from me. I'm the guy who would buy every single thing in his women's and men's collections in seasons past.

There was a modernity, an abstract approach towards cut, color and detail that was so engaging and original, but more importantly to me, imminently wearable. I didn't see that this time. I saw repetition, a referencing of YSL, Lanvin and clothes that bore little relation to Maier's aesthetic. There was a hardness in the leathers that was not ironic. There was nothing soft about them, only a jaded quality that seemed foreign. His women didn't look world weary as much as they appeared tired.
Fashion that speaks to disillusionment is not out of context, but it's a sad commentary.

That said, I saw things in the collection that were still very beautiful. There were draped jersey dresses and all-in ones that looked great along with some very rich alpaca coats with very smart bags. His take

on a suit or 2, though very Saint Laurent in feeling were handsome. One leather outfit near the beginning was hard but at the same time impossibly sexy. Sleek leather works for me in ways that slouchy leather doesn't. The slouch brings back memories of Claude Montana. The Queeny, messy Claude, not the brilliant one. A desig

ner can't be expected to hit a home run every season, but one with Maier's experience doesn't often strike out.

The gowns at the end felt like repeats of last season without any effort to move them forward. The cocktail dresses looked like sugary sweet confections more in the lexicon of Lanvin. The pleated gauze dresses were much more interesting, but were inexplicably paired

with awkward leather boleros that canceled out their softness.The red gown is just the look that will end up on the red carpet, but it's an also ran when you compare it to the black beauty shown next to it. When the cellophane chiffon gown turned up at the Golden Globes on Sandra Bullock I was concerned. That direction gave me paws. That was for me not Bottega Veneta,

There's always next season. Perhaps Tomas Maier's focus on his own eponymous collection has divided his focus an 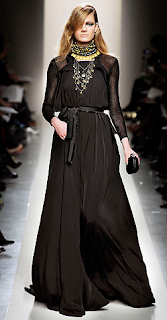 sigh, so agree. Saw the runway clip off the Times and was glazed-eyed thirty seconds in. Am so tired of the models-between-gigs aesthetic, which is only wearable if you're that, or nineteen.

Keep 'em coming, Fluff, you got the energy these collections don't.

The BV show is always the highlight of the shows for me, but you pegged this one exactly right, Fluff. Not that I couldn't drop $15K on a few things but this is the first season in memory I could skip over and not cry.

Ok, the Claude Montana reference to the slouchy leathers--ha! You are the best writer on fashion today. None of the CH (occasional) pretentiousness and with a far deeper knowledge of design and history than most anyone.

I'll have to see if you reviewed the BV men's collection. Was it as unmemorable? And BTW, you ought to review more men's shows.

I agree that this was not the best show but I thought the leather and slouchy dresses were quite nice - slouchy claude montana, such a genius reference. the evening wear was not a hit but still ok, it was not offensive in any way. It simply did not bring the same jaw dropping, luxury dream, clear my trust fund account to zero of season's past.

The direction was off compared to other seasons but still it was better than most collection coming from milan. As you said Fluff you can't hit a home run every season. And BV has had quite a few in the last 3 years. That's enough for fashion history these days- you would think that BV paid me to right this... sadly not... anyway!

I felt the italian shows were a complete bore and seriously put me to sleep. So in a way the harder/ tougher approach at BV was something that caught my eye even with the references that were all over the map. That said, TM still delivers some of the best clothes with such impeccable quality. if i had that kind of money I would still drop an insane money at Bottega, if I had that kind of cash, instead of some crazy collection like Cavalli- let's be real here!