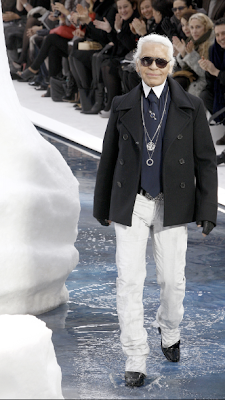 Lagerfeld is never without an inspired take on what the pulse of the fashion masses are. He is a master at taking its collective temperature whether from above or below, in front (ahead) or from behind (the past). It seems that this time around Herr Lagerfeld was left alone to ponder the state of the world, the desecration of the rain forests, the destruction of whole land masses and their populations and the overall crisis we're facing with Global Warming. But looking deeper and much closer to home, I think he was in the mood for a bit of rough. With his toy boy, Baptiste Giabiconi, off making music

or whatever he does when he's not the focus of KL, the Meister looked elsewhere for a muse and stumbled onto Yeti, the last word in rough, not to mention big, untamed and packing some major fur. This big fella was the perfe 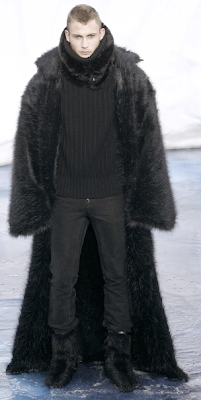 ct match for Karl in that he looks to have given as good as he got. Karl was tossed around his Hotel Particulier like some rag doll by the looks of him when he took his final bow. What a primal and potent collection this was and I loved every single moment of it.

To ship in 240 tons of ice, have it sculpted into an Ice berg and set it in an ice flow to melt (that's the warming metaphor) and subject the audience to freezing t

emperatures, send models wading through the river that surrounded it and dress them as the hybridized issue of Yeti and a man was just too absolutely amazing to behold. Then he tops it all off by incorporating fur into most outfits and accessories, including some of the most fantastic boots since Go-Go boots in 1968. When all was said and done, I discovered that all that seemed real was actually faux , or as Karl termed it, "Fantasy Fur". I was unable to tell the difference. With all the fur that has flooded the runways in Paris, Italy and New York,

leave it to Karl to do it better and do it in Faux. Then to create these wildly animistic looks and do it in such a way that you know 1000% that it will influence and inform so many stores, consumers, designers and the press makes me howl at the moon.

His rigor, artistry, proportion and imagination was as finely tuned in this collection as with Chanel Haute Couture. This man is incapable of compromise. Every piece and detail, whether it's your cup of tea or not is thoroughly thought out. That's what makes it so much fun. The scale of the fur skirts were such that you could actually see them working on a real woman's body as much as on a model's. Haute Humor morphs into high glamor and nudges the paradigm of accepted "style" ever forward. I will illustrate this with a few images but the slide show is where you must go to s

ee the whole story. I used to think that Chanel was best taken neat, but now it's on the rocks with a twist.

My question is: How has Karl found the secret when we all keep scratching around in the dark?
Posted by Fluff Chance at 3:43 PM

I know "bears" are the new black but this is a little too much furrrr even for my hirsute tastes.....
can I get a WOOF up in here!

the year of the bear is upon us

I almost died laughing when the title for the post came up on the reader--perfect!

Now I won't be ordering the blonde hairy skirt, but everything is such a distinct and well-crafted vision, that I can admire this show. Loved that he showed men's pieces with the women's. So many couples I know like to shop together. Maybe that's just too ick for some, but true.

I said the exact same thing when I saw them last night. I stared at my laptop screen with my mouth wide-opened. I called them "The Yeti-snow women."

I did see a few pieces that were wearable and I saw a few that would be great for the slopes of Gstaad or elsewhere.

To say this man complained about fat women, these bear suits will surely pack on the pounds.