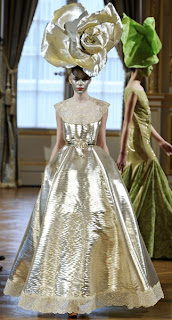 Most seasons I eagerly await the Haute Couture collections. They're the sartorial equivalent of the running of the bulls. The idea being that all the ready to wear collections are like the reckless young men playing chicken against big horned big balled bulls. As my mom would say, the couture comes along to "kick ass and take names". Well this season had a bit of a twist to it for a change. The big, hairy pendulous balls of that rarefied few was distressingly dull. The burning spear was less than hot in many instances and actually blunt. I won't get into all of the collections that did far less than one hopes and mention two or three that were the equivalent of neutered steer. The beauty and technique of the Couture is based on a few simple tenets: the clothes must be made predominantly by hand, a certain number of hands should be involved in the making of them, specific techniques like hand embroidery are to

be employed and a minimum of styles must exist in the collection to qualify and be sanctioned by the Chambre Syndicale de la Haute Couture , the governing body. It may be a case where that laundry list of pre-requisites are met but the stringency of the governing body to uphold the standards has become rather flaccid.

The first show that set off the alarms for me was Alexis Mabille's ode to the magic marker. His leap into the void was inspired by the energy and therapeutic power of color. That means monochromes

of color on dresses, echoes of the same color in huge cabbage rose blossoms atop the heads of the models and then the said same color slathered onto the model's faces. There was pink, peach, turquoise, fuchsia, yellow on and Asian girl and finally deep purple on a Black girl...I can only assume there was no brown in duchesse satin for him to employ or the black satin was voted out as too "outre". Thank god for small blessings. The worst of it is my usual complaint with his clothes. They tend t

o be derivative, obvious, mired in passe details and most damning in their lack if fit and refinement. The embroideries are more in keeping with show girl pyrotechnics and their overall effect is the sort of glamour one associates with pageants. So what message is he sending? I'd have to say that the bar is so much lower now that anyone with a set of markers and a dream can show in Paris, and why limit one's self to the ready to wear, go all the way...

Maxime Simoens is another outstanding example of overarching ambition. When the press notes say that your claim to fame is dressing Beyonce and a front row peopled by little known 'artists' looking for a dress for their upcoming 'single' and an editor or two for good measure, well it doesn't exactly make me sit up and take notice. What it does do is make me take a very long hard look to see what's smoke and what's just plain gas. It didn't take long for the smoke to clear and the noxious gasses 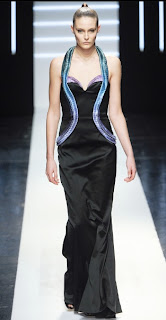 to fill my screen. My first question was this: " Who buys this?" Then I answered my own question:" Nobody." This sort of stuff is for 'artists' with soon to be released 'singles' with no budget and big dreams. Actually, the clothes looked to be suffering the same set of conditions. Unattractive collages of ensembles in mixed mediums and unrelated shades of color seems to be his 'look'. One after another these grim creations followed each other broken up by sad little cocktail 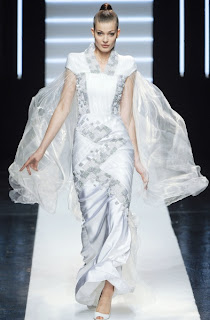 dresses with illusion necklines and wisps of fluttering chiffon tumbling from the back or the shoulders. They were like fallen angels looking for a place in an unholy land. That's what the couture is becoming; an unholy place that welcomes the most banal work from undistinguished players.

Versace really wasn't much better. It would be closer to the truth to call it Mugler considering it bore little resemblance to Versace and had everything to do with vintage Mugler. I wasn't particularly moved by Chanel either. That jumbo jet seemed to have had engine trouble. No one is saying it but I'm convinced that flight was cancelled and was pushed back to the gate...
Posted by Fluff Chance at 7:53 PM

I agree.. what's up? collective designer burn-out? Funny that Chanel was so dull considering that their pre-fall was so gorgeous, IMHO.

They are stylists, they are not couturiers.
Beside everyone with a penny is busy escaping Europe and their austerity programs. The vision of Mr Holland or Mrs Le Pen becoming the President of France is sending shivers down the runways.
Men shows were fun. Why are the men shows so much fun and the women s' so boring....So boring and painful to watch as the poor girls are so sickly thin...It's like a death march.
.