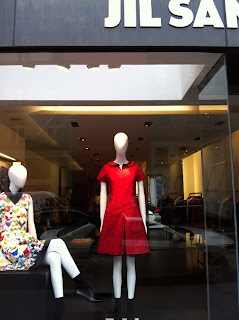 Yesterday, after dropping off my very belated Xmas gifts to my pal Lovey's apartment on the tony Upper East side I decided to walk across to Madison Ave. and take a look at the shops. Living in Brooklyn Heights is one thing but the Upper east side is something altogether else. The moment I hit the pavement I know I'm in a very different place. For one thing there are so many people everywhere. The Heights is home to strollers, nannies,dogs and the occasional parent. Oh, and Jehovah's Witnesses are all over the place but I don't think they're comfortable being categorized as "people" in the neighborhood. They're more like spectral beings who float here and there, holding each other's hands and smiling only at one another. The rest of us don't merit smiles, greetings or any acknowledgement of any sort. For all of their studied disinterest I've found that many of them do like to spy on me in my apartment which faces their fortress on Willow Street. Its always men and they peek from behind curtains or from just below windowsills. Maybe it's just curiosity. Their experiences with humans are limited and I offer a birds eye view of how a certain sort of human lives...but that's another story altogether.
My journey started with a quick stop at the Queen Sofia Spanish Institute where a new show has been mounted by Oscar de la Really Busy, Harold Koda of the Met with a forward by Andre Leon Talley. "Joaquin Sorolla and the Glory of Spanish Dress" is another chapter in the storied past of fashion and costume inspired by the great Spanish painter. This is a great venue for an exhibition of art and fashion. It's very intimate and feels like a private gallery just for you. The Balenciaga show curated by Hamish Bowles last year was 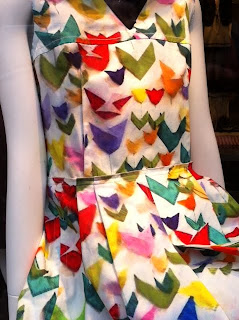 more compelling, but this was worth the price of admission. The show runs through March 10,2012 and has a great book that can be purchased at the institute or at Amazon.
From there I walked across to 68th and Madison and headed south. The Jil Sander boutique called to me and I ran across to get a closer look. I've grown tired of the school of technique which celebrates seaming, darts, you name it, all exposed on the outside along with the great raw and fraying edge. Though that technique was in evidence on the faille dresses adorning the windows, Raf Simons went a few steps further employing lots of elegant stitch techniques to enhance it all. Zig-zag stitiches on exposed darts, pearl merrow stich lines an inch above the hem's edge and laser cuts to fix the raw edges, keeping them from Rodarte-ing their way to the garbage heap (sale rack or museum collection...)It was beautiful and so deliberate. It's inspiring 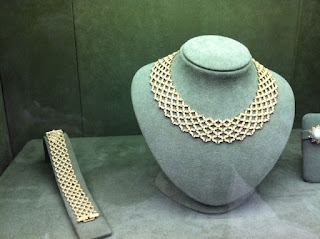 to see a designer make a choice as opposed to having little or no clue of what choices there are to make.
From there I wandered down stopping at Nespresso to get a load of coffee capsules for my voracious coffee maker. That system and its self conscious "boutique" is such a racket. One hundred dollars later I was on my way and found myself drawn to the windows of Bucelatti. I'm a hopeless pilgrim when it comes to Bucellatti. I would cross a sea of broken glass to just gaze upon the beautiful treasures of this jeweller. It isn't the stones that pull me, though their beauty is extraordinary. I'm mesmerized by the way the technicians make the rope inspired necklaces. The brushed, textured surfaces of the gold and platinum is so rich. It's just another world apart from just about all of the other greats. Refinement of the highest order. I have a few books on their history that I look at again and again. Perfection.
Valentino is about to open at a new location so Escada has taken over the old location. It disturbs the eye. The same will be said for when Kors takes over the Steuben gallery farther down the street. Unholy. Ungodly. Unfortunate. The Michael Kors boutique just below Jil Sander is a monument to banal retailing. The stale result of big business with 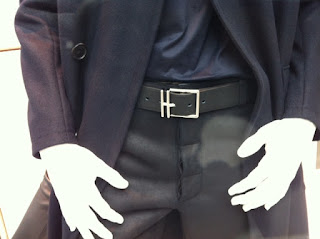 little imagination. Donna Karan on the other side of the street is the exception to that rule. She has OHM'ed her way to a state of bliss and it shows in the clothes. Whether its your cup of green tea or not, you have to admit there is a heart beat in that house.
Then came Hermes. Not even the mother ship on the east side of the street, but the diminutive men's shop opposite. The lure of luxe is almost overwhelming. I don't mean the Birkin-ish suitcase at the foot of the mannequin that probably cost a LOT, or the navy cashmere overcoat, cashmere sweater or black deerskin jodhpurs. What rocked my fragile world was the belt with its insanely discreet buckle. Its the little things that make the bigger picture. I'm going back for that belt. The window to the side of the shop had a stack of their handsome leather notebooks in a range of colors and sizes. I've started a collection and I find them irresistible. Black, saddle leather brown an 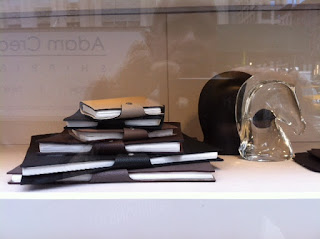 d tan are fine for most, but the mushroom/taupe is toe-curlingly RIGHT. When I pull that sucker out of my bag its like Christmas all over again.
As I walked I looked into many of the boutiques along the way to see if anyone was shopping considering the sales are going on everywhere. There wasn't a lot of action.Dennis Basso had some choice bits in his windows. I've always felt he was a bit crass with the imagination of a hard sell furrier from the old school. He knows how to make a sable coat. J.Mendel, a close neighbor , on the contrary comes with a french pedigree that used to get them over for a long time. The fur they produce is interesting in many ways but they have this misguided idea that fashion is their true calling. That isn't to s 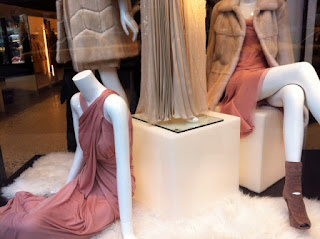 ay they've (Gilles Mendel the pretend designer of the collection) not come up with some memorable gowns in the past. On the whole it looks like a rudderless row boat listing in a dead calm sea. Twenty ideas are incorporated in any given dress and more often than not it is the color of livid flesh. A pinky, bruised reddish tan. The look of a newly micro-derm abraded old flesh face. Like a lot of what was jostling past me on the sidewalk. The J.Mendel world looks like a dying star.
Then came the windows of Barney's...
Posted by Fluff Chance at 3:44 PM

Nicely observed. I vote you do more of these. Always like your writing on men's fashion as well as women's.

Thank you for bring Madison Avenue to the wilds of North Carolina. I felt like I was along as your shopping partner.