Liquidrom: Salvation in a Bathhouse 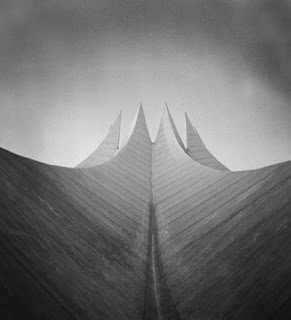 Germany has a thermal bath culture that draws all sorts of people to find rest, rehabilitation and self indulgent pleasure. Over the years I've experienced them from the alpine villages of Austria to Berlin. The Liquidrom in Berlin is so far the most extraordinary thermal bath experience to date. As much as I may play down the self conscious pursuit of the fashionable and trendy, I'm a sucker for a cool scene especially if it comes with a language spoken other than my own. My bathhouse experiences started back when I was a wee thing fresh off the bus and centered around temples to this fine art like The Saint Mark's Baths and a few others that were less memorable. The thermal baths of Germany are rather different as they are co-ed with men and women steaming, sweating and melting together. They're also naked which is a bit different from here. Oh, and it's not just gay men together... Those establishments exist in Europe but are referred to as "Saunas". I saw a few of them too, but that's another sort of salvation. 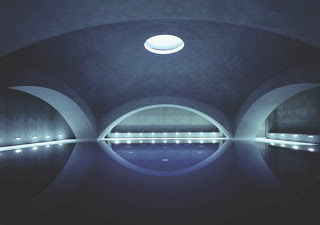 Liquidrom is a monument to the healing arts of thermal salt water pools, saunas of varying temperatures and therapies along with every sort of massage, scrub and wrap. The place is enormous made of poured concrete, teak and glass with space for at least a few hundred people. The main feature is a grotto under a 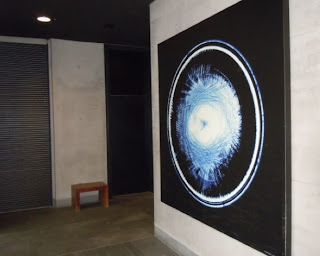 domed ceiling with ambient music piped in through the ceiling and underwater. Everyone is floating on their backs alone or in pairs with their ears submerged in a sort of zen trance. The warm salt water leeches all the bad stuff from your body with the end result a sort of mind cleanse. Imagine what everyone is doing for their bodies by way of juicing only substitute the body for the soul and you get the idea.

I know that Berlin is about to have their own Mercedes Benz Fashion Week but they appear to be a culture more at home naked than dressed. There are no clear trends other than bicycles as the ultimate accessory. Berliners are m 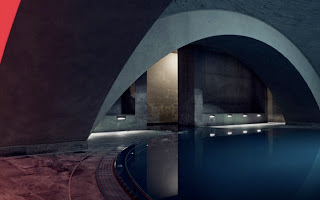 ore at ease with their bodies and so seem less obsessed with fashion. They don't even live their lives through their smart phones. Hanging out for 4 hours in the spa atmosphere of Liquidrom magically took me apart and put me back together. I felt like an onion being slowly peeled. I felt pounds lighter and years younger when I finished. If only we had something comparable here that didn't require a yearly membership or a ticket to some far off resort. Imagine how great a dip in a nice warm pool could be instead of pouring herbal liquid plumber down your gullet. After my soak and steam we went out for a dinner of wiener schnitzel and went to sleep early. Resolutions are so last week so I've decided to just go with the flow, think about getting back to work, writing more and complaining less. We'll see.
Posted by Fluff Chance at 8:04 PM