Looking at 2 legendary houses whose creators helped to change the face of fashion and in doing so changed the way people dressed, moved and acted. You could characterize one as the ultimate romantic (Dior) and the other the ultimate intellectual. One's passion flowed from his heart and the other from his head. Still they both reached a similar point. Both were all about shape, volume, architecture.

With the passing of these giants, their successors have an enormous  responsibility to, in some fundamental way, honor the house's traditions while advancing the conversation. It can be argued that Nicholas Ghesquierre did just that as did John Galliano at Dior. I, for one am in agreement on Galliano's tenure, despite his untimely dismissal. Not so with Ghesquierre. His aesthetic I always found too hard, flat and forced. He is for me a stylist with a range that is neither very broad or deep, for that matter. All bark and no bite. Galliano on the other hand was a mad scientist; a theorist, brilliant storyteller, magician and above all a designer with more than  100 tricks up his sleeve, which brings us to this moment. Raf Simons is now at the helm of Dior and Alexander Wang is driving Balenciaga. 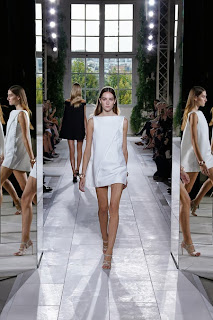 Honestly, I had little faith that either would add much to their new gigs but in one instance I was wrong. Alexander Wang appears surprisingly adept at steering that bus. I'd go even farther and say that he's quickly transforming it into a sleek sports car with 4 on the floor and a convertible top. If his first collection was rather tentative and safe honoring the master with a collection that tread the shoals with many shapes and references to the past. This spring is another matter.
With the opening exits he looked very assured with suits of woven braided leather sculpting short jackets with round shoulders and flared short skirts that never lost their sharp clean line. Added to that, leather pieces that came after, laser cut, buttery and substantial in subtle colors he seemed to be saying that he was clearly up to the challenge. There were some snoozey sections that if anything were a bit too contrived and stiff. 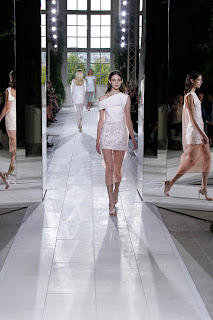 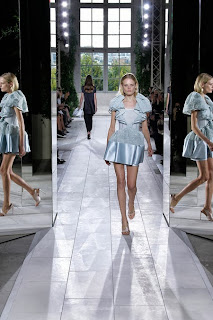 Then Wang woke up and sent out a series of beautifully tailored jackets in white with precise tailoring and a row of delicate buttons. All of this was paired with a film of chiffon that floated over them like a mist. They were simple and superb. So many of the shapes had great flyaway backs that kept your interest coming and going. The more artful evening pieces with stark corsets anchoring draped and tucked silk cloque' with blown out short skirts banded with what looked like wide satin ribbon. They were new, sophisticated and beyond what one would expect from such a young and relatively inexperienced designer like Wang. Let's be real here. The street rarely gives way to the boulevard without a slew of pot holes and construction cones along the way. In short, he was full of surprises and almost all of them welcome. 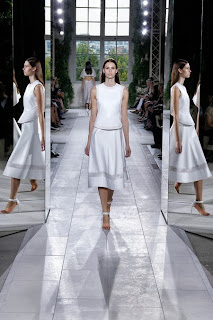 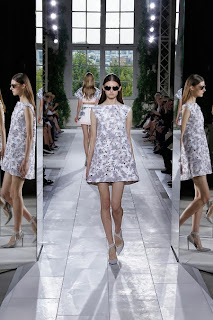 The Dior show was a very different affair. One would come to expect greater things from a designer like Simons who has had years of experience at Jil Sander as well as designing his own collection. The set was yet again a cavern of abundant flowers both real and fake creating a space that looked claustrophobic. Like his debut collection I couldn't help feeling that the set was a foil for the clothes. Unintentionally or not he seemed to fall back on the same formula of presentation. You could squint and imagine you're cruising on a chic glossy surfaced superhighway with lush rolling hills covered in all manner of flowers real and imagined. So fast and so intense is the passing landscape until the camera pulls back and you realize the only thing moving is the backdrop. The actual vehicle you're supposed to be in is just a side window a partial hood and no seats at all. 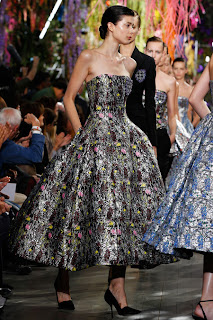 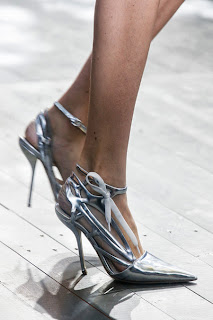 This time the clothes were more adventuresome with jackets, the strongest statement throughout the collection, paired with all manner of skirts pleated and printed. There were beautifully cut coats with oblique shapes and eliminated details like closures and collars, pockets, etc. Underneath were stretch tanks with asymmetric cut out in back and askew cut necklines front and back giving the combination of coat and top or jacket and top a dynamic game of hide and seek. It was a chic game of graphics catch with beautiful saturated colors given to each player. It reminded me of how seductive Galliano's haute sportswear for the house had been in the past. Talk about a frisson. Then the heavy hand of self consciousness creeped from behind the bushes and sent it all to... well, off the highway and onto the shoulder. 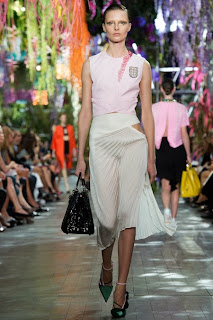 Printed and pleated floral dresses with black bands circling the busts, wrapping around the high hip (to show a division, some clever redefining of proportions) with word embroidered bands of cloth saying things like"Whisper" and "Primrose Path"the pleats were arrested and so was our imagination just as it was about to be set free. This annoying trend of words printed on clothes and dangling from necklaces and plastered on bags is less than imaginative. It does for me the exact opposite. It forces the issue making you react and respond in ways that is as stage directed as the clothes. I can't imagine a woman with personal style wanting to walk into a room like a bit of graffiti, essentially a sandwich board advertisement for designer's stalled agenda. 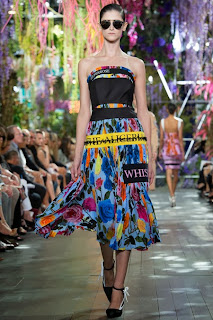 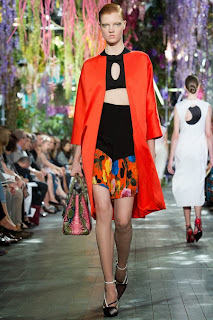 Once the audience was passed that detour the show with a dizzying number of exits (70+) continued with more and more variations on shapes that either Dior or Simons had introduced previously but in those all important "new fabrics" that the press craves. I don't think the consumer really gives a shit about new fabrics. She just craves new and beautiful ideas. When the ideas are rehashed but worded in a way that is over the heads of the most curious of consumers and then re-interpreted by editors imposing all sorts of cultural, political and implausible meanings to the dress, jacket, bag or skirt we all end up in a crowded ditch. 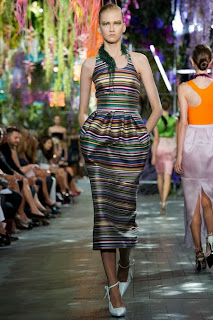 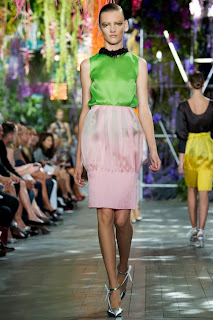 Seriously, most designers just want to design something that for them is beautiful. Beautiful means different things to different people. But statements about the human condition, the bashing of tropes, the annihilation of notions and the Nobel prize for most humanitarian IT bag, are not really thoughts swimming in the heads of most designers. Its more like, who will come to the show? Can I get so and so for my front row? Will Anna let me close enough to kiss her ass? Can we get Karlie to open and close? Do these short shorts make my ass look big? You, know, stuff like that. Oh, and if we send this fur to Mrs. Roitfeld will she keep it, maybe even wear it? You know, shit like that. Still there was a dress in multi-colored stripes that was great. In fact there were 2 of them back to back that looked fresh ans sexy and unforced. A few of the Diorisms in stiff metallic silk with fitted bodices and dropped waists exploding below with skirts held aloft by means of some serious underpinnings. I loved these dresses though like Oscar de la Ho Hum they have become to look like a recipe and not a bold new nibblet.


So in the final analysis, when you look at these 2 shows your conclusions be counter to mine. Fine. But you also may see that Balenciaga has a powerful punch. Great clothes with real style and an elegant aspect that will make some women and others swoon. Dior, in contrast, is a whole lot of synthetic noise with little bite, just a cloyingly artificial aftertaste.
Posted by Fluff Chance at 9:26 PM

Oohhhh wait till YOU see what Marc has for y'all.......hopefully when we git'r'done....

Saw this, thought you might think this is interesting. Would have posted it on your original review but didn't want to go back so many pages...

Saw this and thought you might find it interesting. Would have posted it on the original posting but gave up paging back so far: