Diversity in fashion, that ugly, fear inducing word that raises its unruly head every 10 seasons or so has once again become the battle cry of the disenfranchised. Looking through a handful of magazines rife with (September) issues brought that point home in a staggeringly BIG way. The endless parade of collections from here, London, Paris, Milan, Hell and back are all a sea of sameness. Sullen, soulless faces of androgynous men and women, all pale and blonde with the occasional almond eyed Asian and in all of that army of recruits you might see one person of color. What I'm trying to say in plain English is this: there's one black face or none at all. This has become the rule and no longer the exception. The list of designers who no longer feel that a black model has relevance, beauty, allure, sex appeal or at least, the ability to "sell" a look, this list of designers is about as long as Vogue's September issue is heavy. I was shocked. You'll be shocked too. Actually, I'm not shocked or even surprised and I'd hazard to guess that many of you reading this won't be either. 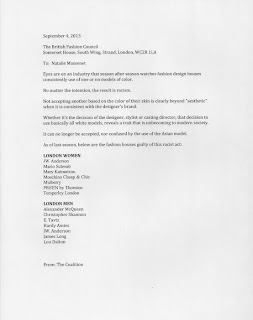 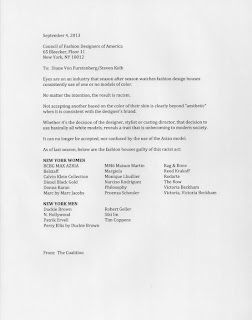 Looking through all 902 pages of September Vogue I counted about 10 black girls in ads and there were 1000's of ads. In the editorial pages I saw maybe 2 in total and that wasn't until I got to page 848. There in the "back of the proverbial bus" of the mag was Joan Smalls in a lonely spread wearing some great coats. Sure, she had 8 pages and looked fantastic but nevertheless, it stung like an afterthought. It was as if someone said," Um, I'm like, not, like, sure if we remembered to have, like, A black girl in a story." And someone else said, "Geez, um, like get someone, like to call someone who, um, like has one and get her over here. And find some stuff we forgot to shoot." "Oh, and also, stick a wig on her head." A hollow victory. Believe me, I'm not someone with a clicker counting all the brown faces on a runway or in the pages of a magazine, but hey, when it's stark white I wonder who forgot diversity. 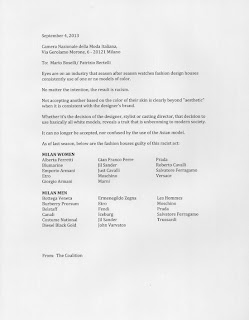 I guess we have Paula Dean to thank for opening up the discussion once again. That chicken frying, bucket o'grits slinging shrew who barely cooks but makes her fortune on the backs of her underpaid, under-appreciated staff of black women and men, has fo' pawed her way to infamy. That's some of the nastiest, small minded white noise I've listened to in a dog's age. 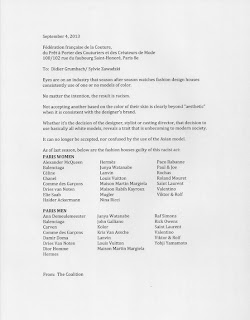 On BalanceDiversity.com I came across a scathing letter written by "The Coalition" addressing this issue.  They were penned and sent the governing bodies of International Fashion Week (MBNYFW, London, Paris and Milan) stating that this appalling absence of diversity and overt racism is no longer acceptable. For each location the Coalition goes 1 league further to name the designers whose women's and menswear collections have been found guilty of this racism.When you consider that most of these shows average about 50 exits with one model per look and not more than maybe one of those models is black, that's quite a pointed statement being made.

It will be interesting to see what, if any, response will come from the industry. I expect it will be a roar of just more white noise.

...and now the lights have dimmed, the music rises and the shows begin.

Dear Fluff, an once again, you are very right. While getting ready for my presentation at Lincoln center I turned to numerous casting agencies for the models and have to say that there are not too many African-American models at all! I did manage to find 2 beautiful black models and one gorgeous Korean model. I wanted all kinds of beautiful girls representing a part of my collection. There should be diversity on the runway too, I am a great believer in that.:-)

It's atrocious. This is why I stopped blogging and writing about fashion. I don't want to be a part of it. Rather than fight it, I just rather not be a part of the fashion system anymore. I no longer read Vogue or the major fashion magazines. Vogue is not my bible. And I stopped purchasing clothes and beauty products from designers guilty of racism.

I hate when they say, "Well, the body type of a black person isn't suited for this collection. We're looking for a certain girl."

Well, if our bodies aren't good, neither is our money. And in a global market, that will SAY something.

I live in London and most of the luxury shoppers are NOT white. These designers and editors guilty of racism are imbeciles.

Dear Anonymous,
Thanks for taking the time to share your experience and opinion. I wish this didn't have to be our experience in this business and in this life, simply because you are as passionate about it as I am and millions of others like us. But unfortunately, that's life. I too no longer shop or look to the editors and critics to steer and inform me. There's nothing they say or do at this point that can make up for the raw deal we've been dealt. All we can do is find the things in life that make a difference and give us pleasure, a reason to keep going and to keep faith in ourselves. That's all we can do.

Well, how many did you hire during your career? How many Hispanic girls? How many from the vast continent of India and China did you make sure were represented? I find this conversation tedious. If African Americans brought real wealth to high fashion, rest assured there would be more representation.

Dear Deluded Anonymous:
What I find tedious is your narrow mind and unctuous tone. Here is a list of my employees and their nationalities:
Jacqueline : sales director ( Haiti)
Linda and Amy and Kathy: patternmakers ( china, china, Korea)
Jawed and Naresh: sample makers ( India and Pakistan)