When one looks at a collection by Ralph Rucci it's absolutely essential to clear your mind of the mindless chatter that surrounds almost every other show that's staged here in New York. In his deceptively simple venue with a beige lacquered runway, scores of clear acrylic chairs with blackened risers ascending from the sides, one knows almost immediately that something unfathomable is about to occur. There's an excitement in the air and an almost palpable feeling of agitation through the audience for the show to begin. It's like a rare dish is about to be served to a mass of starved devotees and everyone can barely sit still to receive it. This is the rare show where the photographers attempting to shoot the high voltage faces come up empty as everyone is too keyed up to have the patience to endure the flash of the bulb or the inanity of the press' questions. This audience is here for an experience. They are here to be transported. We've all come to see a fashion that is in every sense new. My determination to see this event was so great that I got pulled over approaching the midtown tunnel for speeding 25 miles over the limit. All I could think to say to the Officer was to please hurry I had a very important show I could NOT miss. (he took his sweet time and I ended changing in the car) 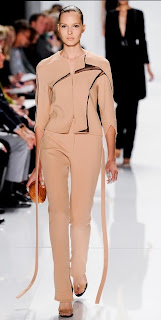 From the first exit Ralph Rucci set a tone that he sustained without the slightest deviation. Calm, almost meditative clothes poured out before us like wine into a proffered glass. White Python jackets, skirts and a slip dress with bands of snake attached in curvilinear rows. No straight lines, these. Fluid, stark jacket shapes with zippered seamed backs revealed the body beneath. Silk jersey in colors of black, bronze and white with a modicum of detail. Ralph's signature seaming, tendrils of rope dangling from the sides and skirts that fell to points at the sides with sheer chiffon echoing the shape fell from beneath. No tricks, a restraint that was as surprising as it was refreshing gave each look the effect of being so wearable, so essential in its detail and cut and ultimately recognizable as purely his own. Black double face wool dresses cut like shirtwaists were broken in tiny vertical lines of tulle making each plane appear to float on the body. This technique of suspension is one he's developed and refined again and again, only now he displays this difficult technique as though it's an organic process and no longer a flex of bravura technical skill. A jacket in tan double face wool started as a near solid form in front only to break into islands of shapes across the back held in place by the most delicate tulle. The clothes looked organic, unstudied, and far less manipulated than in the past, as though he has found an inner satisfaction without the need to show all of his abundant imagination and skill.

There was one wonder of creativity after the other as the models progressed at rapid fire pace. The ideas were hitting you so hard one didn't know where to focus. The backs of things were as enigmatic as the fronts leaving one to follow their approach and departure like spectators at a finals tennis match. Evening was just as effortless as day only with more intricate workmanship, fantastic brush stroke printed organza tunics, blouses and long dresses and a flock of feathered pieces in white like the most exquisite birds. The beading that struck me the most, and there were many of them and each more unusual and abstract than the one before, but the most beautiful one was a simple column in black with a modified apron covered in black micro bugle beads running horizontally across it, which looked like a surface of liquid. The gown was dramatic, spare, commanding and utterly guileless.

The accessories that Ralph included with the presentation were a group of crocodile bags, totes and black baguettes that oozed sophistication and simplicity. The shapes were so assured and the colors as haunting as the many shades he employed in his clothes. Everything was a mid range tone giving the  greens, bronze, nude, chalk, and coral the look of never before seen shades. Even his black and the white of his python pieces looked like colors he mixed himself. The crystal rings that adorned every finger tip of each model was the ultimate in sophistication and chic. Such a small detail made everything so much more attenuated and alluring. In short, Ralph Rucci's work and process has for him become second nature. The flood of ideas from his fertile imagination seem to flow with little effort. These are clothes every woman in the audience could imagine wearing. Every woman from the youngest to the oldest were riveted to the runway with a look of desire, wonder and a barely disguised craving. When all was said and done, Ralph Rucci appeared from the wings, cool calm and contented. This collection was clearly a reflection of the joy and peace of mind of a true master at the very apex of his career. It was an honor to sit in that audience and behold.