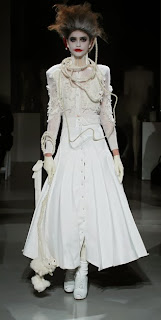 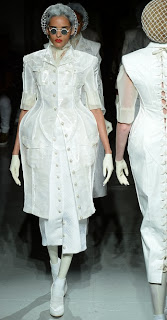 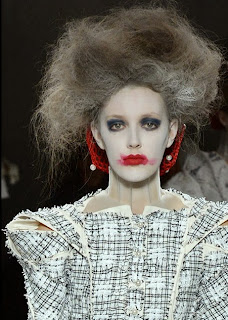 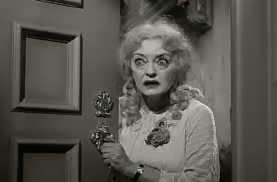 It seems fitting to be siting in a "cafe" here in Amsterdam writing about a few collections I looked at before catching my flight. The one that seems most appropriate to consider in this den of iniquity is Thom Browne. Reading some choice assessments in a number of press outlets commented that it ran the gamut from A to B. One that particularly caught me eye was from the New York Times saying something to the affect that it was deeply felt and compassionate towards women.Granted,that's loosely stated but the word "compassionate" really astounded. Still there were others who loved it for its forward thinking and Browne's fearlessness in a system of the safe and the same. These clothes brought to mind an asylum filled with inmates dressed in get ups that were nothing more than riffs on the work of deceased or disgraced designers:designers like Galliano, McQueen.Their clothes moved, transporting you to worlds of fantasy,forever changing your way of looking at fashion. Even the most avantgarde, romantic and fantastical came from a place of passion and conviction. Thom Browne's vision lacks both unless you one equates his dogged attempts at profundity and cleverness as passion and his unrelenting repetition of the unwearable as conviction.

Looking at Thom Browne's collection was not at all the same experience as a McQueen or Galliano collection. technique was no more evident than fresh ideas of shape or context. Other than an obvious effort and plenty of creative energy his woman looked little more than a costumed Miss Havisham attempting to overcome her agoraphobia. This woman with her bird's nest hair and slathered, smeared scarlet lips is little more than a costumed actress in a make believe locked ward. The tortured fabric with decoupaged lace swatches that look glued in place like a child's arts and crafts project are all affixed to a rotating silhouette of long sleeved, arched shouldered dresses and suits that hobble the model impeding movement.

High waisted hourglass shapes recalling a looser, modern Victorian period with bonded lace sleeveless "coats" over knife pleated organza skirts with blouses, rice powdered faces, black-lensed white spectacles and the de-rigeur snood all made for a silly picture of a confused inmate. Perhaps its all the attention Dior is getting with their rehash and re-do of the now banal Bar jacket, that Mr. Browne feels compelled to shape the hips of jackets and skirts, cutting them on the round as some who know a thing or two about "couture shapes",which makes this such a tiresome exercise.

The front end of the collection is heavily weighted in white lace on white organza with pearl buttons and bug net snoods. When he shifts gears to the bonded white plaid matellasse with china blue pattern and layered laytex, the clothes take on a clinical aspect not too unlike blow-up dolls that satify hje fetishes of a select few. Maybe that's what the NY Times meant by "compassionate". Crackled black/white jackets that looked too much like Wang's Balenciaga but tarted up in an Elizabethan way were just more ho to his hum.

I have to say some of the dresses and jackets were feats of construction but to what end? The most intriguing aspect of the show was the crazed banshee models with their teased hair and red smeared mouths.The bags held by the models by one handle and spilling open at a dangerous angle was a clever, humorous touch. The same could be said for the rigor mortis strands of pearls around the necks of the ladies. Mostly,I love a locked ward scenario especially when it's peopled by the unholy offspring of Baby Jane Hudson.

When Eric Wilson or Cathy Horyn walk around looking like this, I'll take them seriously. Well, not seriously but at their word.

I, for one, am sick of mediocre Brits coming here with their pretensions, cultural chauvinism and pseudo-intellectusalism passing for "fearlessness and forward thinking". Snake oil is what it is.

The US fashion industry (not to mention the French and Italian) is bigger, more formidable and more relevant than the British ever was or will be (to this day I say the only reason London is on the fashion week calendar, when it's relevance rivals that of Madrid or Berlin, is because of one particularly powerful fashion editor) and yet we suffer from the same cultural low self-esteem as Hollywood (the reason "prestige" films always feature British accents). Just because a few old-school garmentos (thanks Donna) think a British accent equals "class" we have to import a bunch of people who were failures in their own country to pollute our (previously successful) fashion schools, magazines, fast fashion companies, runways and even the Costume Institute of the premier AMERICAN museum! (One more Anglophone show and I'm going to puke.)

Consider that the French have always been the world leaders in fashion- why no French imports to US shores? Could it be because they have a real, relevant and viable industry in their own country and don't need the jobs here?

Enough with the Brits already. The emperor is naked AND full of shit.

TO AC/FLUFF -
Though NYC fashion industry is relevant...how much innovation can be found in a mire of mediocrity and blatant incestuous copying of each other....? And though I would like to thank you for your support of the french industry....ever take the time to research the roster here in Paris....? There's almost NOT a single frenchman among them... can we guess where they mostly came from?..I'll give you a hint....same place you feel is overly-pretentious and all that bunk.....till later... back to working on stuff for LV...

The zipper is over 150 years old and every moron designing a novelty "never-before-seen" silhouette always somehow manages to stick one up the back of his "innovative" creation.

If an architect used 150 year old plumbing in a modern building, nobody would refer to it as "innovative".

Spare me the snake oil.