The Agony and the Irony... Rick Owens Spring2014 and other things. 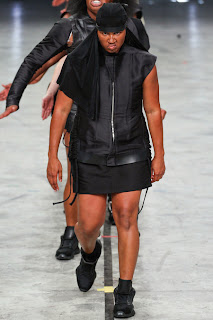 Someone stopped me at the gym the other day and asked why I wasn't at the collections in Paris. It surprised me and then I felt flattered that he thought I should be there. Actually, I think I should be too. Maybe some day if I don't completely lose interest in fashion and where it's going.

I fully intend to be front and center when Ralph Rucci shows his first haute collection there next season.He's been off that particular map for the past several years and it's high time he was back playing with the big girls, showing the world what the couture can look like for today and tomorrow. That's an event I don't plan to miss.

Watching on line and reading what the "media elites" (there's a latent tea bagger in all of us) have to say is one way but not the best way. Up close and personal is preferable even when what's up close is less than exciting, interesting or even relevant. Still you have the total experience and can draw your own conclusions. It's ideal to be in the midst of the action feeling the excitement, soaking up the mood with the help of a set, if there is one, the music and the movement of the models in the clothes that hopefully move as well. 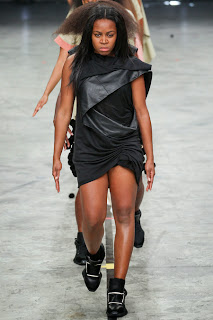 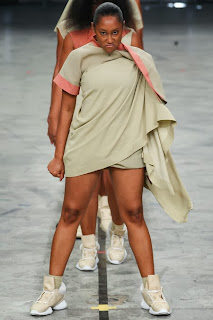 So much of New York was stiff, dull and irrelevant. Clothes that are made to play to only part of the front row, the editorial section, not the retail section which increasingly thinks of itself more and more in the club of the editors, are devoid of a message. The designers who've fallen prey to this malady are steadily killing a business that was at one time compelling and provocative causing people to think and dream.  There are legions in fact but to name them all would take up too much space. It's agonizing. And then the press takes it a step further by encouraging this mediocrity and punishing it at the same time. Talk about confusing...like circling the drain of a clogged sink. 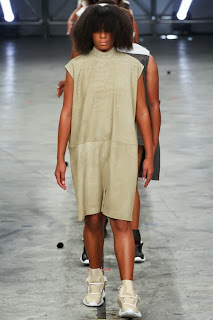 Diversity or the lack, thereof, is on the minds of a few and surely there are some out there counting how many models of color are walking the most influential shows like a pea counter with a clicker at the gate. Rick Owens added to that total with a show that almost exploited the situation. With a group of four separate "stepping" sororities from here, he staged a show that was almost all black with not a model in sight, choreographed and performed by real women with an accent on "real". Strong, muscular, aggressive, scowling, full figured young black and white women "stepping" like an army of warriors marched onto the runway invading and storming the gates of the complacent world of the international fashion cognoscenti. I could just imagine them leaning back in their chairs, all clenched jaws and tight smiles looking at each other silently asking what the hell is going on? Then being swept up in the energy and otherness of it all with phone cams flashing like kids at the zoo.

Strangely, Rick Owens' clothes were pretty fantastic looking on these women. Great sportswear shapes on top and bottom with the line and technique normally associated with more haute fare. The drape of tunics over shorts, the cutest short jumpsuit in leathers, suede and cloth looked like something everybody would look great in... male or female. Whether clean lined planes or draped, wrapped and twisted the clothes have a beauty and "realness" that is missing most everywhere else. What's more, I couldn't help but think that if the clothes looked this good on these girls imagine how good they'll look on figures with fewer curves. 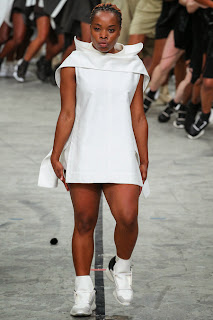 My first impression (pics/review in the Times) was not positive. The review was just short of patronizing. Then I went to YouTube and watched the video. It was rough, hard, harsh, strangely beautiful and exciting. Kind of like what
fashion should be. Did Owens take advantage of the diversity issue by tossing a bomb in the marketplace? Perhaps it was an Owens/Adidas ploy to play the race card considering his ever growing sneaker empire, or just a clever move by a talented iconoclast? Whatever it was, it made a huge statement. It was irony at its most effective. It's the stories behind the screen that can't be shared (discretion) that explain the why and the how. In the end it's the presentation that counts most. When you get something like this you forget how agonizing the journey can be. The sun peeks out and you feel good inside.

Whatever Owens' motivation; cynical or genuine, this show was joyous, if for no other reason than the steppers' energy and earnestness.

Those women put on a great show and made me smile. If he's savvy enough to have exploited that, he deserves to sell a lot of clothes for it.

NY definitely sucks ass compared to much that followed.

And Cathy Horyn is a moron. Someone at the times needs to just move her to book reviews (where she really wants to be anyway) and put us all out of her misery.