Jason Wu Spring 2014: A Dialogue between Construction and Ease.... 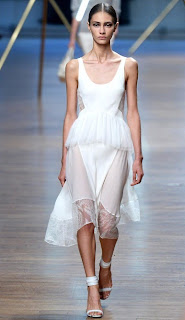 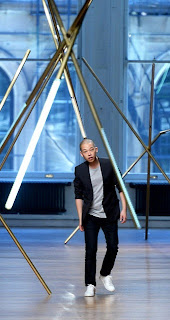 I know. Believe me, I know. What does that pretentious liner note have to do with Jason Wu's collection? How can this be considered a conversation when neither construction or ease had anything to talk about except for maybe that the conversation overheard in the background was Jason talking to himself? Personally, he had me at the first glance of his runway adorned with the sexiest lighting fixtures passing as sculpture. (Spoiler alert: When the runway/set looks too good it's usually a distraction from a show that needs all the help it can get.) Those gleaming sleek chrome rods criss-crossing and intersecting each other created an elegant obstacle course on a floor of polished metal. I wanted each and every one of those fixtures. They said, "Modernist constructs piercing the notion of form by way of beams of light bouncing off of the infinite." I swear that's what I heard. That's what they whispered with sexy abandon. This was a new language. This was poetry, and then the first look came out. 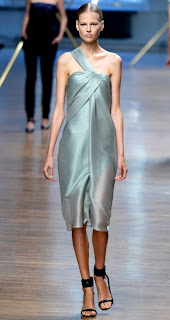 The materials were interesting as were some of the ideas. But they said nothing more than this is a designer hyped to the stratosphere with so so technique, a million ideas all coming from his betters and a look that is as focused and consistent as a schizophrenic. If Karlie Kloss can't breathe life into a dress, no matter how banal, 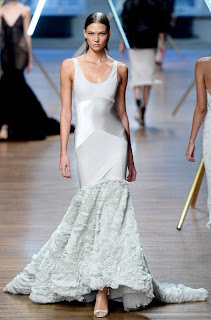 and come off looking like a wet bird, magic is not happening.

The slink in his slinky is devoid of sex appeal, like a french kiss minus the tongue. His tailoring says nothing new. Only that it is acceptable from a distance but not interesting enough to wear. Certainly not enough to hint at style. A fashion for the moment, but not one to stand the test of time or scrutiny. 2 gowns on the First Lady, still does not a designer make. I watched and waited to be grabbed, shaken and stirred. A few gowns near the end cut on the bias had a growl to them. In the spirit of fairness there was one draped organza dress that was beautiful. But most of the time, he'd begin to whisper sweet nothings and then deliver exactly that; nothing.