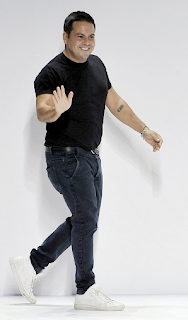 How is it that so few medium sized design houses grow to the so called next level? I don't know. Do you?

Last week in WWD and the Wall Street Journal a story ran on the break up of Liz Claiborne and Narciso Rodriguez. This was a bit of a surprise. When they got into bed together,I think it cost them about 12 million to get him into said bed, the whole industry crowed over his great good fortune. Words like SYNERGY and DNA and HUGE GROWTH POTENTIAL were tossed around like usual in these "marriages". Narciso couldn't have been more happy and Claiborne was thrilled to have some prime designer beef on their menu. The talk was all about growing the brand and branching out into areas of great revenue building products. Licences for a bevy of things, the collection having strategic financing behind it so that it could blast off into Retail heaven and other parallel universes. Everyone seemed so satisfied with their brilliant business plan.

What I found confusing was why would a company so corporate and so totally devoid of creativity and imagination beyond dreaming up Haute Spread sheets, want to get naked with Narciso. The language barrier alone should have caused some concern. He doesn't speak CORP and they don't speak anything other than CORP. I don't think they have even decipherable hand gestures that could be used for communication..... Yet they got married before the first date and declared it a marriage made in Big Biz heaven.

I have always loved is work and think he's by far one of the greatest contemporary designers in NYC and the world for that matter. His business like many has it's financial struggles. NO CASH FLOW seems to be the malaise of just about every design house in New York unless you are an Oscar,Carolina,Donna,Calvin or Ralph. A few more roll along like Proenza Schouler with the infusion of 4 million or so from Valentino and Zac Posen does pretty well with the help of P.Diddy,aka Puffy,aka Sean John,aka Sean Puffy Combs, aka the Gangsta Designa!. Otherwise, everyone else for the most part struggles. Oh, Marchesa does ok with Daddy Weinstein at the rudder...... But Narciso was doing a pretty respectable job with a co. bringing in 4 or 5 million a year in revenues. So why get tied up with a faithless lover like Liz?

That is a rather facetious question. If you're offered 12 million for 1/2 your company,about 8 million more than it's actual worth , and you're tired of sweating the cost of overhead every week, you'd probably say YES, too. So I figure that that is what happened. The problem arises when you wake up the next morning and realize you've just been had by the big bad wolf. These realizations don't take months to become clear...you get the drift after the first kiss. I'm a strong believer in the efficacy of the first kiss. It better be great, it should be like sticking your finger in an electrical socket or no deal. Anything short of that and I'm up and out of there. Taste and technique , not to mention a pleasing smell count for a whole lot. Any of those components missing or all of them no where in sight signals a NO GO. Something tells me a company like Claiborne is not gifted in the art of romance. They are probably masters in the school of FRISK and CAVITY SEARCH.

That said ,I was not surprised to hear of the sudden divorce. The reasons were what knocked me over. I don't mean the lack of SYNERGY(duh) or missing chromosomes of the all important DNA(double duh), but the amount of money that was blown over this match. The numbers still boggle my mind. Claiborne lost 15 million dollars on 4 million dollars of revenue. What kind of Business Model is that? Sounds almost REPUBLICAN, even BUSHISH. What did they spend it on? Do you remember unusually noisy press on the branding of Narciso over the past several months? Did the collections seem anything extraordinarily different than before? Did anything about the 2 parties resound in your consciousness? Not mine.

So another brilliant marriage heads south. It's harder to get married than it is to get divorced. It's tougher to grow a business even when you're a star.. Fortunately he got his business back 100%. Liz may even have to pay him more money in the settlement. For that, I'd have to say, well done! Quick fixes just don't seem to work. Nothing easy comes without a huge price.
what is the lesson in all of this? If you're entering into an arrangement with a behemoth like Liz Claiborne or another industry GIANT, make sure you get in touch with the same lawyers Narciso has.

It will be a PAY DAY you'll never forget.
Posted by Fluff Chance at 8:01 PM