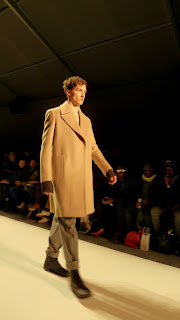 Who wants Thom Browne when you can have Duckie Brown? The first is a feeble attempt at the latter; a poor man's delusion of grandeur. Watching their Fall 2011 collection I couldn't help thinking that Duckie Brown is one of those rare feasts that offer everything from the most subtle delicacy to the rarest acquired taste. When all has been consumed you're left sated and yet hungry for more.

It doesn't matter that bold colors that might lift us all from this crushing malaise have been set aside for the new primary colors: black, grey and beige. The camel of a button less 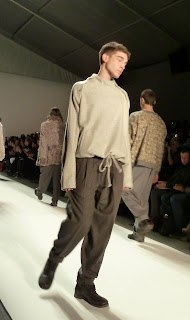 cashmere overcoat is so perfect I almost thought it fire engine red. Knit tops and sweate 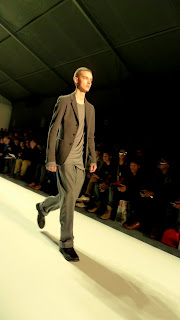 rs are tactile and sexy with their asymmetric drape and are a perfect balance under elegant, tailored jackets that look hewn by the most accomplished tailors. In all of the madness that marks their vision like a hybrid of English dandy ism and American good sense you see a vision of dress that is as much at home on a man or a woman. Trousers were a mix of drape and slouch with what looked like a sarong coming and harem pant going. Big teddy bear fur jackets were thrown over sexy t-shirts and utilitarian trousers. Some of the guys seemed to be Eton schoolboys off campus doing their naughty best. There aren't that many men who walk that side of wild but enough t 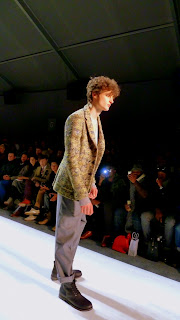 o make theirs a valid contribution. The Ducks propose many ideas that are solidly in the androgyne's camp but not so far out that it makes one laugh or worse, embarrasses. I can't say the same for the other Brown, the thumb scaled Thom. Those guys always look foolish like the courtiers of the Emperor. The very same Emperor with 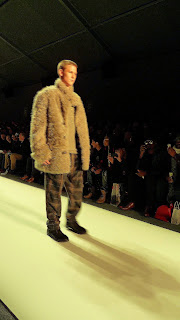 The collection ended almost as quickly as it began. I was so surprised I turned to Fern Mallis who was sitting to my right and said, "Is that it?" "Let's do it again!" She rejoined with," They should send the whole collection out again and this time on a group of women. This whole collection can go either way." She's absolutely right.
Posted by Fluff Chance at 1:59 PM