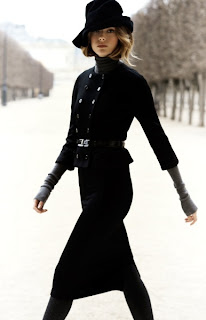 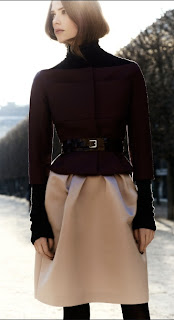 There's something going down at Dior that feels unfair and wrong. The Pre-Fall collection opened this past week and almost nothing from the press has been said. Despite the fact that a collection was conceived, created and presented by Bill Gaytten the creative director of the studio and his team, it seems to be a non-event. Perhaps, because he has been dismissed by the editors of some of the most important papers and magazines as simply an employee. Type casting him as a pattern maker and not a designer is a huge insult. Just looking at his effort this season and the growth he and his team have shown

since the departure of Galliano shows how steadily he's grown into his position and responsibilities. That appraisal has nothing to do with the offerings of other houses which have be

en largely uneven and in some cases really weak; think Valentino and Balenciaga.

It's a sorry state that after all the years he's been working there along side John Galliano and now keeping the label alive and growing it on his own he gets absolutely no recognition from the Times, the fashion blogosphere, a single run-on sentence at Fashionologie, nothing but the images shown on Style.com and little else from others. I could understand if the clothes were off key

but they're not. They're good and in some instances really great.
The suits with sharply tailored, snug jackets over long, slim skirts are beautifully made. They're utterly French in their attitude and even have the much desired "couture shapes" worked into the mix in duchesse satin short skirts and jackets with kimono sleeves. What's funny is that they are actual shapes cut with the precision and perfect balance that is the

hallmark of the couture. No posturing here, just the real deal. And then there are the cocktail dresses in satin and razmir some with appliqued lace on the bodice. Another in a blush color with a bifurcated ( I know, big word...) skirt in that "couture shape" we've all come to demand from our high fallutin' fashion stars. Original. Exquisitely constructed, young and chic. That sounds like a busy checklist of details and all of them are executed.

The shoes with which I would normally take issue with their towering stiletto heels and platforms are really fresh and sleek. A platform that doesn't read: a brick with heel. There are some bags that look great as well. The total picture of these looks all shot in the open air are smart, smart, smart. Considering there are only 22 images available one must assu

me that the collection is modest in size and yet the majority of looks are strong with very few Waterloo moments. The evening gowns are as clean, simple and rich as the day looks. There is one gown in particular that gave me a deep satisfaction. If some maverick stylist decides to pull this gown for one of her intrepid stars for the Oscars, I daresay people will be falling over themselves praising the style chops of the lucky actress and the fearlessness of her stylist... I'm referring to the pale pink column with reversed cardigan on top. To my eye it's perfect.

So why no noise from the peanut gallery? Because it isn't Marc Jacobs? Or not yet Raf Simons? Or god forbid, Jason Wu, Alexander Wang or Olivier Theyskens? No matter how ill suited that pack of names are, they would be easier for the press to get behind. Style.com can't even review it until someone else weighs in first. I think this sort of myopia is disgraceful. When it's good we should all admit it and not play childish games. Bill Gaytten deserves better. He deserves respect.
Posted by Fluff Chance at 8:10 PM

It's true, I've been quick to judge Gaytten's work myself. Having seen the latest couture show I can see the effort he's put into the clothes. Chanel on the other hand was tedious.

Thanks for posting this!

Beautiful clothes that make you want them!

I love what Bill Gaytten's work for Dior in this collection and the recent couture collection. I was also surprised about the lack of praise for this designer. You and I both know, there's no logic in this industry.