The world of Wang waits for no one. A singular mission has this young dynamo blazing ever new trails in the thicket that is fashion week. His mantra this season comes from his spiritual guide Marc Jacobs. The message in short is ,"Givem' what they don't expect as soon as they're onto you", or something stirringly inspired along those lines. It seems he did just that. Just when everyone was t-shirted out Wang threw a curve ball and put in some beautifully sharp tailored military inspired ,sleeveless jackets over all sorts of trendy, immature leggings , pantie briefs and other confusing things. The tailored jackets that also worked as mismatched suits with prize fighter boxing shorts , or boxing shorts with low slung pants layered over them were an interesting look. Some were in a beautiful cognac leather and others in regulation bla

Someone somewhere said with this collection Alexander drew a line in the sand. I still am not sure w

hat that means. The collection was quirky and at the same time showed his commitment to move forward and show that he has a strong message to put forth. Mainly that message is that he's serious and serious about changing the landscape of contemporary sportswear for today's hipster girls who want to be naughty. It reminds me of an aesthetic both forced and ripe for copying by those cheesy stores downtown filled with weekend tweens from all over the place. The types with little or no parental authority in their lives. There were looks in this collection that definitely would jazz existing things in a young woman's closet but to be taken as complete head to toe outfits , they were a forced march to the land of Trend. The big news was that he premiered his new line of sunglasses: 3 styles. Well they were very Judy Jetson and were actually 1 style made in 3 different colors and materials but all exactly the same shape. This is not a wunderkind that Vogue and others are touting, but another kid with a lucky break riding the wave of early stardom. I wish him luck, he'll need it. When those clothes hang on the rack in retail stores around the country and the world, they will need legs of their own. Without a clever stylist to mix it like a potent 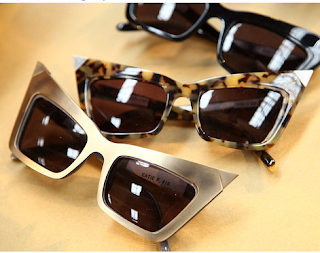 cocktail they have an oddly benign quality.

Derek Lam was a lovely collection with many things to excite a woman. He's a different sort of designer with a clearer view of what is cool and what makes women feel and look sexy. I was pleasantly surprised at his obvious taste and solidity. There was a sense of balance that was not evident fro

m several others who've shown thus far. The opening of his show was simple and dramatic. Printed and solid dresses with contrasting cowl draped scarves at the neck were very straight forward, sexy and sophisticated. Such simple and unfussy dresses that any woman would look great in. Crepe was a fabric that appeared again in many styles, most dramatically in deep dark navy. One lonely denim dress was really outstanding. Lots of silk floral prints came down the runway in little dresses that were sexy and cute, but prints are a very personal thing, very subjective. This creates a minor issue if they don't find a way to be strong and interesting enough to appeal to most. The draped cowl scarves at the necks of the opening dresses were easy, they were polka-dots. The florals took more of a chance. There were lots of dresses, tops and skirts that were draped and dolman-sleeved which gave things an artistic and serious beauty. Technique in dress making no matter the message is paramount to a look of quality, value and assurance on the part of the designer.

The one detail that was leitmotif running throughout the collection was a boned midriff either accented with contrasting colors to illustrate their presence or simply seen in the sewing of the garment. Boned, demi-corsets were a constant that gave things a 40's feeling that for me was not modern and took away from

the fluidity and ease of the collection. Imagine a beautifully draped dress with flowing neckline and sleeves complete with a twisted and draped skirt and then a 10' high midriff filled with constricting boning.....To my eyes, it sort of defeated the purpose. There were the ubiquitous evening pieces at the shows end that were all spangled and encrusted . O

ne or two were cute and played on the floral print but all alight with sequins and crystals. Then came the all-over gold number that was all garish vulgarity. That was the dress that Rachel Zoe, stylist to the stars took her over sized sunglasses off for and shot a picture. That was the only thing she shot. Her boredom and painfully obvious lack of enthusiasm was broken by that one regrettable dress. That says volumes about the arbiters of taste in Hollywood and their unfortunate reach to so many women everywhere.
Posted by Fluff Chance at 10:39 AM

You've got Wang figured out. Cannot wait for you take on Posen. best, anj

I totally agree with you about Wang-- the only adjective I can muster to describe his runway presentation is "ugly". I am completely perplexed as to why his draped dresses (which lack novelty), sweatpants, denim jacket with leather sleeves sell so quickly. After a year or two his pieces look completely dated.

I can think of a dozen other designers that deserve the hype.

Fluff -- your runway reviews are by far the most insightful I have read - please keep them coming. Duckie Brown are not my cup of tea, but I respect and agree with your take on why they are important -- I hope they keep going and I think they will.

Dear Anonymous#2,
I appreciate your comment. I wish you would send it through again and post it to Duckie as it applies to them and not to Wang or Lam, if you wouldn't mind.
Thanks,
Fluff