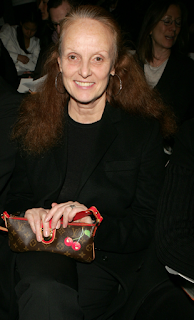 Thank God for Grace Coddington! She alone could have and did carry this film. I was mesmerized by her commitment to the magazine and her work at Vogue. She was an incredible force, so brilliant and so real. Having read countless reviews before finally seeing the film, I was expecting lots of brittleness from Anna Wintour. I wasn't disappointed. She was what I've always suspected. Her remoteness was so much so that she basically cancelled herself out. The treat was to see the real cheer leader within that team. Her name is Grace and she is the definition of her name. The scenes of her as sittings editor shooting beautiful spreads were really something to behold. Her Creative Direction was that overused word:awesome. The understanding of how to tell a story with clothes and models and a photographer was nothing short of visual poetry. I could have listened to her and watched her no nonsense humanity for hours.
The other players in the cast were more caricatures than anything else. The audience in the theater were participants in the viewing. The laughs,groans and guffaws were hilarious. Candy Pratts Price was a new definition of pretension, and her brand of hyperbole had absolutely no punch. Andre Leon Talley was little more than the court jester. I was uncomfortable watching him edited to look like an ineffectual clown, which he is anything but.The trembling editors timidly showing their wares to Anna were like lambs going to slaughter. Anna's visits to the YSL studio and Gaultier studio before their collections to preview them was like watching a dentist work without novocaine.Mario Testino was nothing short of an idiotic,self absorbed poseur.
What was most over played was the way too much footage of Thakoon and his Gap glory. It was b-rated design and d-list entertainment. Most fascinating in regards to him was the back room maneuvering that Anna and Oscar de la Renta did to secure this kid a high level position for the Spanish owned chain Mango. It was actual footage of their putting their pets in plum jobs. Good for Thakoon, not so good for Mango. He benefited the most from this film with the exception of Grace. It was light entertainment and only reinforced my feeling that the Vogue machine is like so many other businesses. Their interest is commerce, not fashion. Certainly not fashion for the 13million readers they talk about. It's beyond aspirational imagery but the manipulation of the market place. But that was then. There's an awful lot of water under the bridge since then. Now the rivers have shrunk to streams and times call for a different measure. As long as Grace stays on the masthead, there's hope. The magazine was hers. So was the movie.
Posted by Fluff Chance at 11:40 PM

I am salivating to see this film (and the doc on Valentino) if only to see what the practitioners wear in their daily world.

Thanks so much for the precis, Fluff, xx

I aspire to be the next Grace - she is amazing and everything you said about the movie was true but I still hauled my butt out to see it 3 times.

You got it so right again! I walked out of the theatre secretly wishing for the Grace Coddington story. I can't get enough of her. I haven't been able to stop thinking about her perfect mix of romance and realism. Even though I'm already 36--I want to be GC when I grow up.

I do feel that Mr. Talley despite his influence. knowledge and spirit is largely responsible for the caricature he allows himself to be seen as. Is it irony or self-delusion?

Granted - Fashion is the absolute most(to me)! But I was shocked when Anna Wintour said that people who find humor in some of the industry's characters or dismiss fashion people as silly are basically jealous because they can't play with the cool kids. Did I misinterpret? I'm not in the fashion industry so I don't know if this is the general feeling. Oh - and LOVED the Valentino movie. Can't wait to see it again from Netflix!

You are the only voice of reason on the fashion blogs universe,I am so tired of those little boys and girls gushing at "anything fashion". Fashion is just a business with an agenda which is making tons of money for "very few'. There used to be " style" which had no price tag, it was flea markets and a run on family members' closet . One found a way to be fashionable, timeless and chic. Thank god for the net , the curtain will be lifted and fashion little dirty secrets will be revealed. No turning back.

I can't wait to see the movie myself and see if it is worth all of the hype. I seriously doubt if any of the bootleggers will have this movie in their inventory, so I‘ll have to wait until the release date. I guess with any job it's all about who you know and who's in a position to help you. I had no idea that Thakoon was the designer for the Mango brand. I know you love writing your blog, but the New York Times needs to hire you as their new fashion editor/critic. I bet you that the editors at Vogue and the other publications lurk on your blog daily. And I’m sure that Cathy Horyn is reading this right now.

dear Divalocity, I appreciate your sentiments but I have to set a few things straight. I am not a journalist of the calibre necessary for the New York Times. I owe a HUGE debt of gratitude to both Cathy Horyn and Eric Wilson the Fashion editors of the Times. I can not even approach their Professionalism and wealth of knowledge and experience. I am a rookie, they in contrast are the REAL DEAL. I wouldn't even wish to be put in the same category. Their wealth of knowledge and experience dwarfs me and my message. I wouldn't enjoy the exposure I have as a blogger if it weren't for them and you my loyal reader. It's a wonderful compliment, but they are in a league all their own, and a league I have no illusions of being a member of. As far as Thakoon being responsible for Mango, that is only a part of the film. I haven't said he is the Creative director of Mango. I don't know or care if that is true or not. I only mentioned it as one of the story lines.Thanks for your support, though. It's very much appreciated.

many people have a good selections of fashion / styles blogs (ok, yours included, of course). those blogs are the new vogue.

anna should be thankful that someone hasn't figure out a way to absorb all the talents in their old print business. but that day is coming, for sure.

I feel September Issue's purpose is twofold. Firstly to keep fashion from fading from people's mind. Just feed the right amount of glamour dose that would keep people addicted to fashion! Secondly, it is to capture a moment (while still relevant) that would be so singular in the history of fashion and preserve it in all its glory. The role that magazines and editors would play in the next 20 years would definitely not be what they did 20 years back when they were the sole gateway into fashion, the internet is changing the rules of the game and I seriously doubt whether there could be another Anna Wintour who would dictate the semantics and grammar of the fashion industry for more than two decades. I guess that era is over and this movie is a valiant effort to preserve that era together with all people connected with it!

And one more thing if only all fashion critics could be as honest as you!

Forget the goody bags and honour the art! That should be the maxim!

I'm tired of the false contrast that people are drawing between Anna Wintour and Grace Coddington. Although GC was interesting, I've read that she has had her own Ice Queen moments.

I had the impression that de la Renta wanted the Mango job for himself.

AW came off very well: a fascinating character, although I no, I wouldn't want to work for her.

Hmmmn, thanks for the review. You've pretty much summed up my thoughts of what it would be like.

Although I am certain that Grace has her ice queen moments, as a woman of a certain age I am inspired by her admitted wrinkles and that fact that she retains flair and her individuality

Finally saw the documentary yesterday and Grace is the star. Its nice to see someone with strong beliefs and convictions care about their job and care so passionately about the creative process. If anything, this movie gives me a the urge to pick up a Vogue once in a while. I also like the fact that we do see a very human side of Anna. I do not think her daughter truly understands and appreciates what she does. Its obvious Anna is a driven women looking for acceptance from here peers. And by her peers, I mean her family (if you saw the film, you know what I am refering to). The fashion industry is a business and deserves to be treated with respect.

Fluff Chance please don't sell yourself short. You are most definitely in Cathy Horyn's league. When I read your critiques of Design, I know that you're seeing something that I, and a lot of other people are missing.

I love your take on the movie and I love your writing style. Grace is a dream. Cheers!

Fluffy,
You have no idea what you are talking about. You have clearly never led an organization, you missed how expertly Anna Wintour played the filmmakers, and you make an ignorant jab at Mario Testino, one of the greatest living photographers. Another pathetic blogger talking shit about a legend. Stop touching keyboards. God you're an idiot. Anna Wintour's job is to make money for shareholders. She does that. STFU!