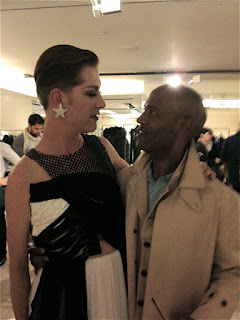 Well by all the signs it was a hit. There were so many people I had my tail stepped on one too many times. The energy was so high that I felt no pain. It was craziness everywhere. When every major store and important shop is pumping the hordes with champagne, margaritas and Big Appletinis, you really can't miss. It was so packed that every time this cat was swung around I hit every sort of shopper and booze hound in town. 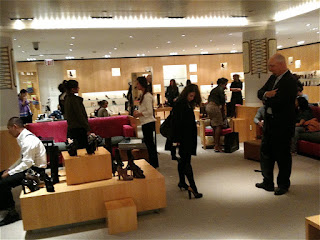 I had to ask Sales Associates everywhere I went if the crowds were shopping or just getting smashed. Most were very candid with their answers. Th 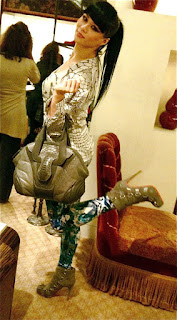 e consensus was that the stores were full but for the most part people were out to party in the new ultimate bar: the luxury department store. The feeling most of these incredibly upbeat and patient Sales Associates expressed was that seeds were sown for shoppers to ruminate on.The hope was that they might remember having seen some must haves when they come to and return to actually bu 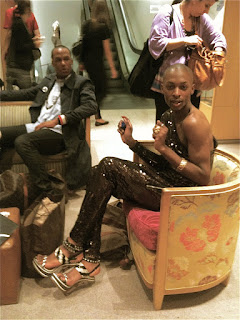 Barneys was jumping throughout. The most intense activity was on the floor where Isabel and Ruben Toledo were signing their coffee table book. Justin Bond aka Kiki of Kiki and Herb was there dressed in Rodarte. It takes a 6'2" cross dresser to really carry off a Rodarte frock. He was Stunning! And so fabulously charming. It was too good to pass up so I had my picture taken with him. T 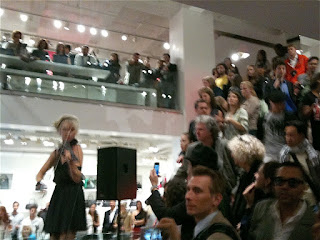 hat's the closest I've gotten to a Rodarte and I have to admit I was terrified of tearing it. Fortunately, it stayed together despite its tenuous construction. Still the mood was infectious. I've never seen so many happy people....happy drunks . I'm sure I was the only sober shopper within the borough of Manhattan.

The most interesting phenomenon in Bergdorfs,Barney and Saks were the women's shoe departments. That's were the money changed hands, or at best the one department where shoppers swarmed, tried on the merchandise and most likely shopped. It was consistent in each store. From young to old to drag queens, you name it, they were trying everything in sight. The Shoe salesmen and women were run ragged. 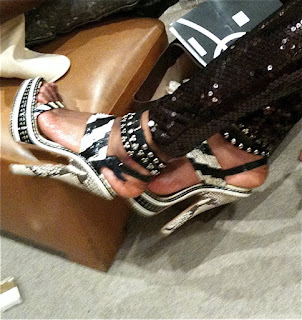 The best pictures I took were in those departments.

The store that was the most insanely full had to have been DKNY on Madison Ave. There was a female rock violinist who had thousands of people's attention. It was a crush to get in and impossible to exit.I had to slither between the legs of the crowd to escape. The problem with being a Sphinx cat is that everyone wants to touch and hold you. I'm not that crazy about being touched or held by stra 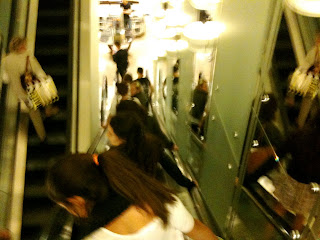 ngers but I tolerated it. I figured if that was free entertainment for the crowds, well that's what tonight was all about. I did my humble bit and topped the night off by buying an expensive coffee table book on the top floor of Barneys. Now off to bed with my new book!

Now I know where to wear my studded leather cuff, it looks so yes on that guy's ankle.

Christa , you and I should have gone together. There was so much insanity to take in , I know I missed the larger chunk of it. But is was fun and even surreal. Has a nice , well mannered Lady from London you would have found the brash , ballsy crowd a SCREAM. Talk about inmates from the asylum running wild down the streets..... I wish you'd been my date, I might have had the courage to fight for those shoes. If two looked that good on him, just think of the statement four would have made on these paws! You were missed as always! your, Fluff

Last night was indeed fun, but I have to say I did not see anyone buying. Mostly what I saw were wannabe fashionistas trying on clothing they could not afford in Barneys, Bergdorf's, Valentino and so on (or as one very well dressed man who was not caught up in the fervor "a bunch of Zoolanders in the streets"). But according to staff in all stores, last night's revelers where the most anyone saw on Madison Avenue in sometime. If anything, last night made the idea of shopping fun and hopefully will get people to experience shopping again in actual stores and not online.

Fluff, you made my day with your pic of Justin Bond in Rodarte! Makes up for not being in the city for the fun!

Fluff, may I use the man in the picture with the heels, on my blog for a post about men wearing heels? Where have I been when this is happening? I saw hairstylist Derek J. on the RHOA holding an "It Bag" and wearing stilettos all the while still dressed as a man. This is a trend that I've certainly missed and one that I must write about because I find it odd, but fascinating. They don't care what people think and I love it!

Divalocity,
Sure you can use the pictures. Enjoy, it's a very interesting phenomenon and one that stops me dead in my tracks every time I see it.
Fluff