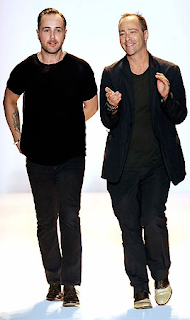 Duckie Brown, a menswear collection by Daniel Silver and Steven Cox is an example of the

ion going on in design for men. The smart designers are pushing boundaries, no longer satisfied with the status- quo look of standard fare with a new color added or a detail from the past to give it a forward momentum. This collection takes the notion of menswear and turns it upside down. Shapes that are often hard,like jackets, become soft. Fabrics and construction have had the stuffing removed. There is an androgynous feeling to much of the collection which caused me to question my set ideas of what is right and what is louche for me and my fellow Tom cats.

In the opening exits of the show there were 4 pocket safari jackets , all in linen tweeds, belted over draped or pleated shorts. The most unexpected were the jodphur shorts complete with rounded thighs ending above the knee. Other shorts had tiny pin tucked pleats across the front of the waist. One would almost think it was an detail suggesting Indian traditional pants, but it was more deliberate and somehow a Duckie-ism as opposed to a cultural reference. In this uncharted territory I started to feel a shift in the masculine paradigm toward a look that could no long

er be so easily classified.An overall feeling of languor and calm permeated eve

rything from shape to fabrics to color. The one consistent jolt of color were the suede Ducks that each model wore. They ranged from a bright blue to saffron yellow to beige. They gave everything a pop that was just the right accent.

I think these two guys like to challenge and play with us a lot of the time. Instead of forcing new ways of looking at clothes and dressing , they cajole you into the deal with humorous and ultimately thought provoking ideas. It started with the most slouchy transparent cashmere sweater that was draped and tucked on one hip only to hang languidly off the opposite hip. With this was a dove grey linen jodphur short with a draped sash at the waist tied in an exuberant bow. Feminine? yes Fun? yes again. There were other tops and shirts that were also sheer and incredibly soft which is the normal turf for the Ladies. On men it is incredibly sexy and not off key if you're willing to hum along. Personally, a silk mousseline button down shirt looked perfectly appropriate by the time I'd been inDuckietrinated. And it didn't take that long.

Bathing suits were another source of wonder in the world of the Duckies. There were a couple of pairs of trunks in particular that captured the mood of change. It was your basic brief but with lots of extra fabric which draped and climbed up the torso of the model. It felt like Rudi Gernreich in a way but also like turn of the century men's one piece trunks which have been pulled off the shoulders to gather and rest on the torso. There were beautiful and put the exclamation point on this collection. Colors were soft, muted and sexy. The hands that made these clothes were gentle and let the fabric take the lead.

as a silk jersey blazer and shirt over short. No big deal only this was like liquid. I've seen this done in other collections but more for women and rarely for men. There's was beyond cool. I am a relatively conservative man when it comes to dressing myself. This suit was the antithesis of what I'd normally wear. My vanity has a built in emergency brake. When that look came sauntering down the runway, passing within inches of my eyes I let out a gasp. I wanted to look like him, be him and have that suit. To hell with feeling self conscious, I would rather feel great. Fantastic was written all over that suit.

Now is not the time to hold back in life. We just don't know what's waiting around the corner or from one moment to the next. I want to enjoy what there is to enjoy which will make the tough stuff easier to bear. If clothes and getting dressed in the morning or at night is a way to stave off the downer that we're all suffering then we should embrace this option and charge ahead. If we can't find a way to make ourselves happy, who the hell do we think is going to do it for us?

Duckie Brown had the best gift on each seat that I've seen so far. It came in a sexy leather drawstring pouch and was a mystery until I got it home. It was AXE deodorant, something we all need even as the temperature begins to drop. There's a lot to sweat these days in life and the boys have thought of yet another essential to add to our arsenal. They think of everything!
Posted by Fluff Chance at 8:38 AM

When did dressing like Ghandi become fashionable. Can't WAIT to get to the store to try those on? Mirror, please.

As a straight male I don't see anything wrong with this line. If of course this is just a template for a further evolution of what I think are some really good concepts.
Even shorts with a big-ass bow on the front, and grand sherpa shorts.

It's exciting, and clearly gives equal aire of a good start...coupled with ambition.