Social Studies: The audience is as entertaining as the runway. 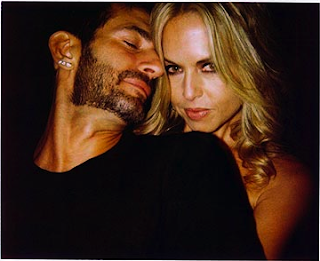 
The tents were rife with entertainment. We were there, or at least I was, to see the collections. Many invited guests and followers of the Fashion circus were all fixed on the collections. The tension and excitement in the air was thick enough to cut with a machine gun. Outside the tents where crowds gathered to watch the glittering throngs enter and exit was a strange scene. The whole star gazing thing has always been a mystery to me. That isn't to say that I'm not curious or occasionally captivated when I see someone of note a few feet away. I'll stare like the next guy/girl but it's not the thing I live for. You got the feeling that there were people there day in and out just to watch those few come and go for the sheer thrill of seeing"them".

Personally, it made me feel a bit uncomfortable. Part of me just wanted to say to the huddled masses,"It's really no big Woop". But that's easy to say when you're on the way in and others are not. Waiting in line to get your seating assignment is another experience. Impatience is a disease of the Fashionable. For some silly reason many people get very annoyed having to wait to get this important detail handled. I think it has something to do with a misguided idea that they think the world should know who they are and none of the rules of protocol need apply to them. Others use that wrinkle in time to preen. I watched countless men and mostly women adjusting their clothes, hair,and makeup. Two women, whom i spotted a number of times, kept adjusting each other's dresses and hair for each other. Literally, tugging on the dress, unzipping and re-zipping the others dress and adjusting bra straps. Like two blonde apes picking off vermin or in this case, rearranging the vermin to it's best advantage.

Once inside, it's a floor show of who sits where, who is who and who is not. I was fortunate to have a front row seat on a few occasions, and let me tell you, that is the best seat in the house. Best because you get to watch the high rollers, the "Whales" as it were, in all their glory.The photographers are stalking their prey and the players are doing their best to act as though nothing out of the ordinary is going on. If it were me and I was talking to a friend next to me and suddenly had three cameras on me at the same time all flashing within two feet of me, I think I would notice a slight disturbance. Not these guys. They all played as though nothing unusual was happening and either stopped to pose or just kept talking about whatever. Self consciousness is left in the Town car down the block.

When the two blondes came in in search of their seats a couple of cameras turned on them and started shooting. For the life of me, I had no idea who they were except a couple of women in strapless and one-shouldered cocktail dresses at 11:00 in the morning. A few ladies behind me were buzzing loudly about hearing that this one and that one were going to be there. They were on fire at the prospect of catching sight of this celebrity or that one and could barely contain their excitement. When the two inappropriately dressed she-apes came in they were asking each other who they were. It was a frenzy of questions. One tapped me on the shoulder and asked me if I knew. Maybe they thought that a front row seat implies knowledge. All I could say was," I think they're two overdressed blondes !" Those ladies looked at me like I was insane. I guess I am.

The people I watched and enjoyed a lot were the teams from the major Department stores: the Saks, Neiman's, Bergdorf Goodman, Barneys and Nordstrom's gangs. So much self regard,self importance and silliness. They looked as though they were scientists or juiced up entertainers. Lots of air kissing and chair hopping to and fro. The few who were interviewed by roving TV stations were animated and long winded until it was over then they sat back down with an expression of boredom. They seemed to live for those moments. When the shows started all traces of animation was shut off. Poof! Dead eyes with no traces of life. I guess that's the way it's done. That's why they make the big bucks.....

Who got the interview was just as interesting as who didn't. The really sharp people like the editors from the NY Times,Cathy Horyn and Eric Wilson or Teri Agins from the Wall Street Journal were more often passed over for some deadbeat stylist like Rachel Zoe or some past her shelf life socialite. I honestly don't think Jamee Gregory has much to bring to the table. Rachel was one of the most bored , sour pussed front row viewers at every show I attended. She's Runway Poison.

It was fun to spy on Rachel after having watched a couple of episodes from her "reality" show. If that's reality then give me reruns of Knot's Landing. Can she be as jaded and absurd in person as she is on the little screen? Actually, yes. Her expert eye was of more interest to me than her behavior which is graceless and obnoxious. Rachel likes to sit front and center with the biggest dark glasses on in the room. They stay on ala Anna even with a camera in her hand. I watched her at Derek Lam to see what would strike her red carpet fancy. Well, nothing seemed to. She sat staring scornfully throughout until the very end when the sparkly numbers trotted by. Sportswear designers rarely have a gift for evening clothes unless they are Michael Kors or Francisco Costa. These beaded numbers were either cutesy or plainly overwrought. When the most regrettable of the four came out, all gold sequins and cheap looking, off came the sunglasses and Rachel starting shooting. I laughed to myself because I knew she would hone in on the tackiest dress of the collection. But what do I know? I'm just a myopic cat without a clue.

I discovered that I'm not alone.
Posted by Fluff Chance at 5:53 PM

Rachel Zoe's celebrity makes me despair for my species.

how did you know? your attention to her methodology.

We live in a celebrity based culture now, where anything and everyone seems to revolve around them. Personally, I can do away with it, what really fascinates me are the non-celebrities who actually have the real style and not that of an image maker.

There are real women who buy these clothes and not just the celebrities. The fashion shows should be about the clothes being offered, not the "IT" celebrity of the moment. Did you notice how a lot of celebrities who are now so-called D-listed were there?

I admire Rachel Zoe for her entrepreneurial spirit and I admire anyone who can turn a passion into a profit, but she's literally "dying" for fashion. That phrase that she says: I Die, is actually becoming her reality. The insanity is turning her into a human clothes hanger.

Sorry, folks but I don’t follow trends or celebrities for their fashion sense, style is about individuality and you can’t have a sense of style if you don’t follow your own.

you it is a funny funny business. i have been to a few shows in my life. some good ones, some well, the models were there. but what is more captivating in a fashion show is the front row people. I usually look at the front row to see if anything catches their eyes... usually a lot of them look so so miserable, they are not even looking, their staring at floor. I wonder if they are there, physically of course but that is it. on top of that, they are the one that say at the end, that was his/her best collection to date! i just have to laugh and try to get to the next show. Ironically, celebrities actually are looking at the clothes and you can see their excitement. funny business, no?

I remember the breathtaking
Paris Couture shows of 1989 through to 2001.

When there was a celebrity in the front row, Sophia Loren for Valentino's 30th year Show, for instance,
the photographers were all in pushing for the shots... for tomorrow's news and Hola magazine,
2 minutes it's over and on to the next person...

Anna Wintour was just making her presence be felt in the beginning ... she got 30 seconds... just note taking... in case... another story...

It was quite a ritual, where only the few celebrated got photos taken, and their names and social positions were legendary.

The photographers were very careful about NOT shooting the Saudi Arabian Ladies, who waved their programs discreetly in front of their faces, only black kohl eyes peeking above their make shift mask/fans. All the more seductive...

Never did I see the nonsense that you are describing now.
Retail store execs and stylists are going thru the same fluff and preening?! The ones I saw from my fifth row perch, were Majors contented with 2nd row!

I haven't been to any shows lately, but I can very well see that I saw the Best at their Best, once upon a time, 20 years ago.
I felt that it was my PHD education in FASHION.

I still work in this Biz, but I cannot buy the Buzz.
Hell, why go thru the fuss when you can see it on the internet in 12 hours?

I'm afraid that by means of her vapid show, Rachel Zoe taints all who are involved in the design and fashion industry. The art and skill of design, the balance of good design with good business, the competitiveness--these are all reduced to her thumbs up, thumbs down ranting choices of dresses. The episodes I have seen do not give any detailed information about the fashion choices that are so important to her clients. There have been some good fashion shows in the past, but this one makes Project Runway look like Masterpiece Theatre.

Thanks for your very funny review of The Zoe!