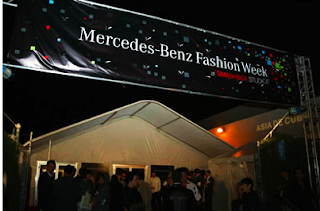 It's not easy getting an invitation to the shows. I'm a rookie at this, unlike many bloggers out there who have done the heavy lifting for some of us Newbies. I thought that now I'm writing instead of designing and actually have time to take in the circus live, it wouldn't be that tough to get a seat or a place to stand . I much prefer seeing a collection in action. To feel the mood that surrounds it as well as the collection itself. That's impossible from video or stills. You have to really see in order to intelligently comment.
Getting through to press offices to secure an invitation is like applying to school. There seems to be a very careful vetting process that allows for a very controlled audience. It will be interesting to see how this all plays out. One obstacle appears to be the fact that bloggers are not necessarily considered the standard form for what's understood as a Press person. We are an uneasily classifiable breed. Now I understand what I've been reading about this road block. Time will be the test. It's like so many other institutional misconceptions. We don't act as magazines who advertise or carry ads. We are more the mavericks who answer to a different higher power. That being one of our own design. Taking it personally that one isn't welcome is something to fight against. I have to remind myself that just because I think I may have a valuable contribution to make, the sharing of information to a large internet audience isn't exactly the way others see it. I'm not that interested in waiting in a holding area hoping to squeeze in at the last second after the lights have gone down and the first exits have already exited. The shows I end up seeing will be interesting and fun. The theater of Fashion week is exciting but at the same time there are other ways to see and process the messages of the season. Being creative in that pursuit will be the task laid out. With such volatile and uncertain times we all live in, I'm more than ever curious to see what coping mechanisms Designers will come up with. In turn, I will have to put mine to work as well. I hope to see you all there.
Posted by Fluff Chance at 5:22 PM

They're going to figure it out eventually -- that a good review on a popular fashion blog can be as valuable as a smile from La Wintour, and someday I predict they'll be courting the bigger bloggers just as much as they do her. And eventually there will be bloggers whose advertising connections with designers and retailers cause as much influence over what they write as it does at Vogue. (That's already happening, you've probably noticed.) Right now, though, folks like you are the mavericks and loose cannons in their eyes and they are scaredscaredscared of you. Keep 'em on their toes, Fluff.

I, like a number of people I know, live for seeing photos of the clothing and accessories, nothing more, nothing less! I want the items to speak for themselves and unfortunately their voices get lost in the pomp and circumstance of the shows and the press of the designer (should I have used """?)...love reading you blog :)!

Fluff, the tricky part in procuring an invitation depends on (though I hate to admit it) how your review is going to be, the more glowing and adulatory it is the easier your chances of getting inside the tent! Say a blog has a readership of 5000+ visitors per month, the fashion houses would definitely be willing to invite that blogger provided they get good reviews written about their designs. The way it works is that bloggers who are starving for invites are willing to write what the designers what them to write. I personally know bloggers who approach pr agencies with requests like "give me an invite, I'll review your collection in my blog, send the review to you and if its okay by you would publish it in my blog”. The paradox here is if you stay true to the art (fashion) and give a critical review you don't get invited to the next show and if you need to get invited to the show to write a just review you have to be untrue to the art! I too find this very frustrating at times!

I cannot wait to read your comments, your perspective is more interesting and nuanced than most of the mainstream media outlets coverage.

oh I hope you gt in to many shows - I can't wait to see these shows through your eyes: designer turned blogger. What a treat.

This red-headed step child syndrome that afflicts bloggers is the very reason I always accept invitations from any designer, big, small, good, mediocre, that is gracious enough to send me one. I am honored and flattered they want me and my readers to view their collection.

The good news is some designers get it. They know that bloggers are one piece of a very important press puzzle. Norma Kamali and Vivenne Tam come to mind.

Can't wait to see what you receive invitations to!

And the additional challenge this year are the shows at Milk Studio. I have a press pass to MBFW which gives me access to the PR contacts. I have been trying to hunt down which designers are showing at MILK and when, and then who does their PR. This is much more time consuming. On top of this it means there is a strong possibility that you'll want to be in two places at one time...quite the challenge. For me, it's more important to see the lesser known designers and fortunately those invites are easier to come by. Best of luck, Fluff!

I know. I didn't try this time around, but I'm hoping next time that I can get in somewhere! Didn't feel like turning on the charm machine this year! LOL!

omg i know how you feel! i applied for press acrediation for NYFW! wish me luckkk!!!