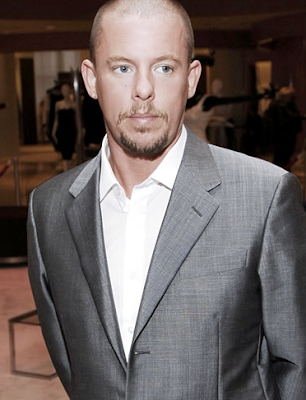 It's taken me some time to wrap my mind around the death of Alexander McQueen. I will not refer to him as Lee. That would be presumptuous of me, as I never had the pleasure of meeting him or being his friend. I, like most people, followed his career and admired his work from a remove. His was a talent that was so unique and specific that it took time for me to grasp its enormity. I started to understand it the first time I ventured into his boutique in New York's Meat Packing district. Looking at the clothes, touching them and seeing first hand the beauty of their quality and craftsmanship, opened my eyes wide. There were only a few people inside, more sales people than customers, but there was a very warm and comfortable atmosphere enveloping that store so jammed with amazing clothes, accessories, shoes and jewelry. Two women were trying on suits with the help of extremely capable salespeople and fitters. The suits on these ladies were so beautifully cut and quirky in their subtle detail that I stood watching and blurted that they must buy them, no matter the investment. Both of them turned to me and sheepishly agreed. Suffice it to say , I was very impressed and that much more intrigued by the person behind it all.

Two seasons ago, the collection that to me was more amphibious and extra-terrestrial than earthbound, sent me reeling. I couldn't get over the prints, the manipulation of such commanding fabrics, the absolutely strange shoes and lastly, the make-up and hair which utterly transformed the models. Though I wrote about it as otherworldly, I didn't get the gravity or his telescopic vision until Avatar appeared. It looked like Alexander predated and predicted a vision of women that made that film immediately look dated. I can be very stubborn and wary of art and design that attempts to dramatically alter the landscape, but he did it constantly and doggedly from his first collection to his final offering. Offering is the word that comes to mind looking at the last 16 pieces that he made. To call it a collection is to tether it to a season, this business, this earth. That would be an injustice and hopelessly mundane.

When I look at these last pieces I am sure that he and everyone working closely with him knew that he was finished with his work and preparing to move on. The fact that he cut them all himself, if in fact that is true and I don't for a moment doubt it, Alexander seemed to be making an offering to the heavens. They look as though they were his attempt to mirror the divine with man made images. It appeared that a man who had been given divine gifts was showing his gratitude by offering them back to the place from where they originated. I'm not religious in the conventional sense so I don't say this easily or lightly. It's all that I can come up with after wracking my brain for an answer.

Analyzing and dissecting each piece is a pointless exercise, just as much as trifling over who will take over the house. None of that is terribly important as they are the day to day mundane decisions that conglomerates and businesses occupy themselves with. What matters are the gifts that we were lucky to receive just by being present for the short time that Alexander McQueen wielded his mighty scissors. What luck of timing, what incredible visions of worlds he shared with us. I can only feel amazement and joy when I think of his life's work. And now that it has come to an end, all I feel is a profound gratitude to have been seated in the audience.

Images courtesy of Style.com
Posted by Fluff Chance at 3:35 PM

Your writing keeps getting better and better. I do wish one of the major magazines or newspapers would sit up, notice and hire you!

Fluff, I've been working on a similar post on Alexander McQueen after seeing his Last Collection...but I haven't found the right words to say to provide any sort of justice in my attempt to honor his work. Yours are far more beautiful than any I have been stumbling over.

Thanks for writing this. I don't really follow fashion but Alexander McQueen was truly amazing. The Spring and Fall collections for 2010 are really works of fine art. They can't be considered anything less than art.

Reading this actually made me tear up. I agree with Dandy, your tribute was better than anything written at the time of his passing.

Perfection! The absolute best tribute put forth thus far. Quite moving. Thank you.

I commented on your first posting on McQueen; you found the words we all needed someone to say. And today again remind me to be grateful for these offerings rather than so damn sad. RIP, McQueen. And thank you, Fluff.

thank you so much for this summation. i don't think anyone has been able to capture the difficulty that so many people--myself included--are dealing with at having lost such a phenomenal character. and yet none of us had ever met the man. his work was so powerful that absolute strangers are simply grief-stricken by the loss.
thank you for writing this.

hi...divine gifts..what a perfect description for the superior talent of alexander mcqueen.i had the pleasure of meeting the painfully shy genius and i will cherish that memory.
fluff tell e.g.to see the film" "visage" by ming liang tsai...my friend anne just shared with christian lacroix an award for costumes in hong kong last night...at the asian film awards...it's a gorgeous film albeit wild and filmed in the louvre and tuileries.hugs..bill

bravo - your words are so true. I coveted his Smoke Jacket years ago and still do. Sadly I was a poor fashion child and could not afford it but dreaming of it is fun. He was a genius.

You nailed it Fluff.
I too was shocked when I saw the actual clothes - this time in Galerie Lafayette's premier etage full of Marc, Sonia etc.
McQueens creations were too exceptional to be on this floor with mere mortals...
Seeing those digital animal prints was simply astonishing.
Thank you for this.
Carolg