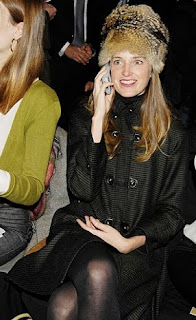 Ever since Mark Lee, Barneys new CEO, named Amanda Brooks fashion director, I've begun to mourn the store's passing. That's not to say it's in death throes but I can hear a muffled rattle coming from somewhere in Ladies furnishings. Why would he choose a socialite with a string of bad marriages (professional) trailing her? Her days at Tuleh as creative director, (what? why? how?) left Bryan Bradley with the clothes on his back and nothing to sell. Her days at Hogan appear to be a nonevent as well as her stint as fashion director at William Morris Endeavor Entertainment. That job title is the most dubious of them all. Since when are we going to William Morris for clothing? I don't remember watching a fashion reality show produced by them for that matter. It brings to mind Wallis Simpson and a laundry list of cuckolded swains. So what's going on with Barney's other than they want to stick yet another bottle blonde on the front row of a fashion show. I guess Julie Gilhart was too real for them. She was a professional with a point of view, racks and racks full of experience and a real work ethic. She never hid behind a pair of shades and a drink most nights of every week. Oh, and Julie liked to work hard for good measure. I read that Cathy Horyn asked the CEO why he hired her and his response was: "Ms. Brooks brought a diverse background, as an editor, stylist and brand developer, to her post. 'We didn’t need more retail help.'' Well that's a clear and considered point of view because there's little chance she'll be contributing in that vein. It must be nice to float from one burning boat to another. That's the new upward mobility.
Posted by Fluff Chance at 6:59 PM

Would you want your Captain to be wearing that hat at the helm of the sinking ship? NO! It looks like Barney's is grasping at straw's (in this case feathers) to save themselves and it is going terribly wrong.

For a while there Barneys reminded me of Bendels in the 70' or dare I say it: BIBA in London in the 60'.
Barneys annoyed me at time but it was a pleasant visit always, not so pleasant for my finances but great pleasure for the buck. Now I am not sure anymore, where are they going....Time will tell....I am tired of those Ladies who are trying to outshine with their own hype the brand they are supposed to sell.

I hope its down feathers if they are on sinking ship. It doesn't do anyone any good if Barney's takes a turn for the worst. May she be more QE2 than Titanic.

WHAT is the matter with that poor woman's hand?

Dear Christa,
I should have known you'd be the one to pick up on that gesture. I think its the hand of the truly idle. Unless it holds a phone, drink or menu it's useless. Kind of like the wing of a Dodo.
love, Fluff

Fluff, you are a hoot!

Could not agree with you more, only the shoe department is exciting although it has too many cliche Louboutin and Manolos for me.