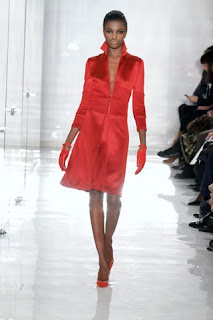 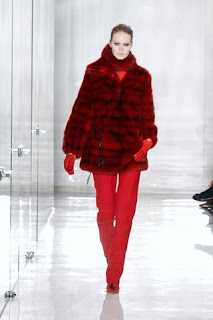 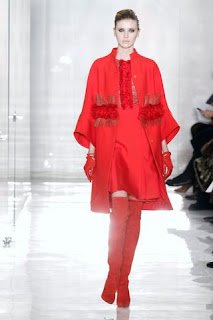 s reminded of why fashion matters. In a sea of mediocrity with schools of fish filling every space like krill in full retreat there will occasionally appear a species so rare that no textbook or scientist can readily identify or classify it. Instead, one just stares dumbly at the extraordinary fact of its existence. Tonight was one of those moments. I felt that I was witnessing something that would be hard to describe to anyone who hadn't seen it for themselves. Fashion is so chock full of the fabulous, the brilliant and the divine. Hyperbole is like air in this world. So what do you say when you see something that is so astounding you almost don't believe it was real? How can you compare it to other collections when you've been grading them all on a curve? Is it possible to have one compartment for the rest of what's out there and another that contains only this one? Intellectualizing and articulating something that produces a purely physical and emotional response is beyond me. Let me just say that the moment the show started I saw RED. 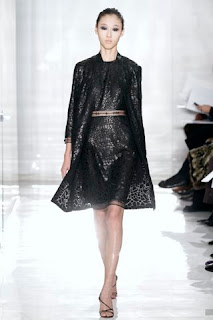 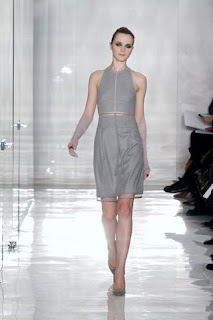 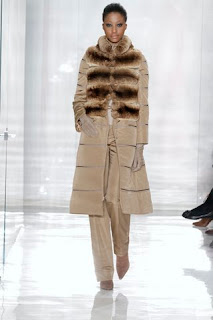 red micro bugle beads and livid moire. Fire and passion. Every line, detail, gesture, nuance was an expression of his soul, his fire. There was no sense that the clothes had been styled, manipulated or manufactured. It was as though each and every piece grew from his imagination. There was not a single look that wasn't essential, 1000% complete and if there is such a thing as perfect, they were perfect. Certainly, these clothes are not for everyone. Price aside, you need to have an appreciation for the extraordinary. Here is a designer that only searches for new ways to create volume, never before seen decorative surfaces, finishes and "trims" to punctuate those shapes that just boggle the mind. Imagine a show where every look is almost a rifle shot. Your senses are almost overwhelmed by one creation after the other and each is more beautiful than the last. 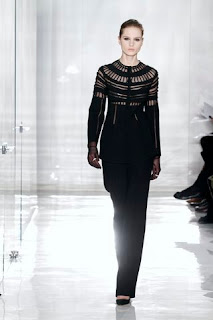 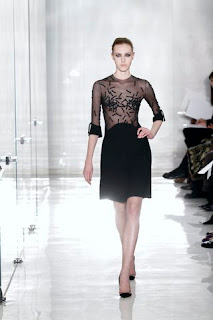 ws of knotted piping. Black, bronze and ivory and gray parted his red tide. Jackets in cashmere, moire, Etro wool paisley and other fabrics usually associated with interiors were all expertly molded, draped and cut with sleeves that echo the curve of the arm and bodies that follow the line of spine. A red patent leather raincoat was covered from collar to cuff in trapunto stitches like braided hair of an Edo-period warrior. Symmetry gave way to asymmetry. Nothing was pat. No simple answers just elemental questions 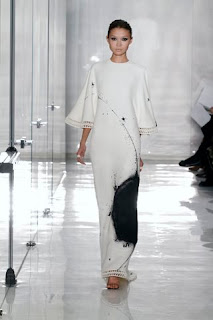 . A black matte paillette pajama walked past and the woman to my right said that it suggested Halston. I agreed that it did, but it was even better. If there were references they were murmu 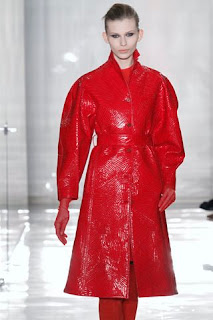 rs from his past. His march is forward, inexorable, never retreating... and then came more Red.

Layers and layers of silk mouselline with a glaze of shine here and shadow there on a strapless column. An ensemble of duchesse satin sculpted into a shrug with emphatic sleeves over a column of sublime simplicity. They kept coming and each was more audacious than the previous one. Ralph had opened the vein of his imagination and 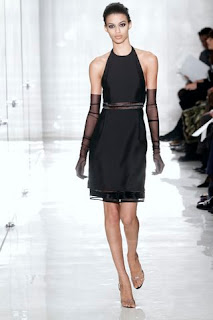 there was no stopping the flow. He seemed to be saying, "take this and this and this." This was a show. No one seemed to care that we were being transported. Are you a hostage if you go willingly? This was a journey light years away from what we've seen. It was only supposed to be a short trip, a 10 minute jaunt. It was anything but that.

P.S.
This man is a national treasure. He is the greatest living designer of this century and most of last. There's no one working that can touch his skill, imagination, rigor, spirit, and commitment, no one. The bar has been rai 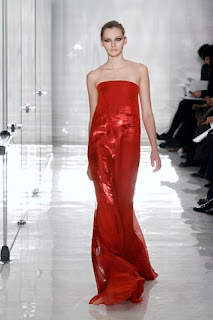 sed and the gauntlet tossed. Like any priceless treasure, monument or institution we have a collective responsibility to keep him and his house alive. That means our press, as misguided and small minded as it is, yes that's Vogue and Conde Nast I'm referring to and our luxury retailers both major and minor have a responsibility to support and promote the house. The same goes for the wealthy women of this country who are devoted couture customers abroad. The fact that Anna Wintour was nowhere in the room was nothing short of irresponsible. An absence such as hers almost appears personal. If Andre Leon Talley, Hamish Bowles, Cathy Horyn, Glenda Bailey, Suzy Menkes, Bobbie 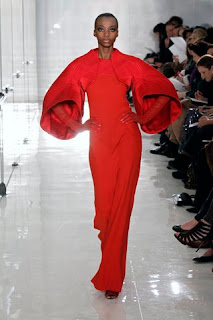 Queen, Constance White and an army of other journalists, not to mention the big guns of the most important stores here and abroad were there, something important is brewing. To be blunt, there was no representation from Italian, Paris, Nippon or any other Vogue magazines for that matter. Is there a Conde Nast black out? You'd think these important editors would be there considering they were spotted elsewhere in town. Even Boaz Mazor was working the room and it wasn't even Oscar's show.... (go figure). Marc's show at the Armory started late enough for all of the girls to have caught both. It was their loss.
Posted by Fluff Chance at 8:02 PM

There is very little more compelling than a man with great courage.

Thank you for yours.

Do you have the book with his art in it-so interesting? I thought these were beautiful especially loved that white floating gown. Though I only look at the NYTIMES coverage and love to get it first hand here-it is obviously above and beyond the other things showing through the week. Not to mention these women look stunning in the clothes-though I could see a Me wearing some of them. I saw the C Benz models-and they in turn looked like they were playing dress up. I liked some things but the presentation killed it with the 15 year old look or actual models and clothes that appeared to be 2 sizes too big.

Ralph Rucci is so pleasantly consistent

BIG RAVE!
The Ralph Rucci Collection is always about COUTURE. "Coupe de Maitre" cut of the master, or masterful cut, comes to mind...

Thank God, his women come to him for just what they need, want and wear it sleekly through the events of their life. I've seen them at events, the clothing is really a cut above everyone else and it shows. They do get noticed in a subtle, breathtaking way...aaahh! only for those who know.


The sequins crowds here!
Small rant...
All the Conde Nasty (sic) don't belong at his show anyway... What are they going to do for him? Find him a job at one of those Luxury Monument companies that churn thru designers like a meat grinder if the profits aren't up. oh, and let's not forget who's ad money the rag mags are fueled by...They know they serve a greater purpose of directing the aspirational Russians, Indians and Chinese who need an education in LVMH luxuries. Sorry, but McDonalds got there first.

Vogue is a dying dinosaur. Anna and Andre Leon and the rest killed it.

Thank you for your remarkable report on this unbelievably talented designer. The clothes are stunning - I just wish the photos could be larger so that detail could be examined.

He is without a doubt the best in the business. aa

No one has expressed what so many others saw and felt on Monday night, thank you for doing it so beautifully.
As I sit here in Chado right now, I look forward to
My new acquisitions and feel fortunate to be able to add them to my wardrobe.. With every stunning, piece, I feel great.....isn't that the point? Every last knot,trapunto, lattice panel, confetti applique,
Horsehair hem,broadtail band, gazar flounce,pagoda sleeve and feather Ralph succeeded in inspirimg those "..who seek refinement, beauty and even peace in the world of fashion'. In his words...

As someone who owns a few of Mr.Rucci's pieces...his exquisite eye for the seam and stitch is OTHERWORLDLY...do you think he really needs to be touted in Vogue, when already Andre Leon Talley wears him exclusively to the Met Gala and EVERYWHERE ELSE. I would think that like Cristobal Balenciaga...the quiet Master is always the one at the head of the Class for all to learn from.

I don't want to sound paranoid but I cannot find him on style.com, is it me or does Anna controls that too ? Remind us why they hate him, what did he do to deserve the cold shoulder?

Beautiful review on an extraordinary collection. As usual, the coverage Mr. Rucci gets in the mainstream press is largely absent, but could you honestly see his stuff stuff styles w/ Thankoon's on some super young model jumping? That's about the best he'd get at Vogue IMHO.

W had their shot at covering him and they blew it too. It seems Mr. Rucci is destined to be underappreciated in his own backyard by most of the fashion media, but given how celebrity focused and "next best thing" is all is, is this really a bad thing?

I'd love to see him get the love, recognition, and customers he deserves but much of the fashion media simply isn't up to the job of intelligently presenting him. It's sad, but true.

P.S. As for ALT wearing Chado, that's hardly a plus for Mr. Rucci IMHO.

Anon 4:24 his collection is up at Style.com, tho I had trouble getting it to work for me.

I don't think they hate Mr. Rucci, per se, as much as they don't know what to do w/ him and find him a bit off putting. Unlike most designers these days, he has very set ideas about how/when/where he wants his stuff presented and will not compromise on the matter. That's a very hard line to take in this media environment. Add to this, he's not lending his clothes to be worn on red carpets, schmoozing w/ stylists, nor is he spending big ad money. These days most of the folks who get much attention do one or the other, but usually both.

I can't lay the whole blame here on the fashion media...part of it lies w/ Mr. Rucci himself. He's seeking a specific type of coverage and a specific type of customer that used to be set in stone for designers such as himself (think Galanos and Adolfo), but isn't any longer. The present media environment requires a bit more flexibility than he's shown towards it, IMHO. Fashion has gone mass market in a big way, but he doesn't seem to understand that or see the possibilities this offers. TBH, I'm amazed he's surviving in this environment as well as he is given the lack of media coverage, licensees, and his price points.

Jeannie Becker on FashionTV has given him the best and most consistent fashion coverage over the years, she gets him IMHO...you might go to their site and check it out.