Galliano's slip of the tongue..... 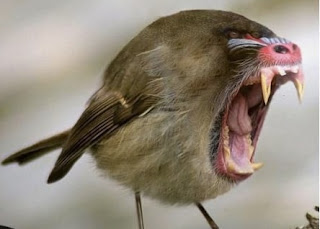 ( you thought I was less than handsome... well Bruno here has a face only a mother could love)

This is the L'Express article by way of Google translator:

PARIS - The fashion house Dior has suspended its creator, Briton John Galliano, accused of uttering anti-Semitic and racist slurs on Thursday night in Paris, during an altercation with a couple, a version contradicted by his lawyer.

The famous fashion designer, while intoxicated, was arrested Thursday night following the altercation and heard " few hours "by police before being let free," said a police source.

But hours after the revelation of this affair, which occurred just days before the opening of " Fashion Week ", Dior decided to react.

" The House of Dior said with the utmost firmness the policy of zero tolerance in respect of any statements or anti-Semitic or racist attitudes. Pending the results of the survey, Christian Dior designer John Galliano has suspended from office , " said the CEO of Dior, Sidney Toledano said in a statement.

This decision, considered " excessive "by the designer's lawyer, Mr. Stephane Zerbib, has instead been greeted by the Representative Council of Jewish Institutions in France (CRIF) and the International League against Racism and Antisemitism (Licra).

Dior has not decided whether or not it canceled its fall-winter 2011 fashion show scheduled for Friday March 4 in Paris, said one of his spokesmen told AFP.

According to preliminary information gathered by the police, the scene took place Thursday around 21 hours on the terrace of a fashionable cafe, located in the Marais, the heart of the French capital, a historic Jewish community Paris.

An altercation broke out for unknown reasons between the designer, aged 50, and a couple seated next to him.

According to comments reported by the couple's Europe 1 radio, the designer would have launched in English: " Dirty jewish face, You Should Be Dead "(Sale of Jewish head, you should be dead) and" Asian Fucking bastard, I Will Kill you '(fucking bastard Asian, I will kill you). According to police sources, the designer also " cheerfully "insulted the woman committing" minor violence ".

Such insults, if true, would fall within the scope of public insult of a racial nature, according to the Penal Code, an offense punishable by six months in prison and 22,500 euros fine.

" Mr. Galliano denies anti-Semitic slurs , "responded Mr. Stephane Zerbib, adding:" There was an altercation, Mr. Galliano was verbally abused, but at no time did he utter such insults, we Moreover, evidence in this direction . "

The German magazine and website Sleek, specializing in fashion, cites witnesses who claim that the altercation erupted when Galliano attempted to start the conversation with this couple, who mistook him for a tramp. The witnesses said the couple had abused and insulted Galliano turn the woman.

Quickly arrested by police after the incident, the designer has been taken to the district to be heard before being left free. A medical examination revealed a blood alcohol level with a positive rate of 1.1 milligrams of alcohol per liter of breath.

Both victims filed a complaint at the district, police said. The prosecution was unable to confirm the filing of these complaints.

The British fashion designer who took the reins of creation for Dior in 1996, has emerged as one of the most inventive and creative, flamboyant, drawing inspiration from history and his travels around the world.

Since 1999, he oversees all the feminine lines of Dior and the leather and the brand image. He drew alongside her own collections.

By AFP
Posted by Fluff Chance at 2:45 PM

I love that Bruno bird. Adorable.

There is a good interview with Franca Sozzani on www.ashadedviewonfashion.com about the entire mess.

And tomorrow Diane Pernet will plant the rumor that Gareth Pugh will be his replacement. As she does every time someone passes or gets fired.

Very Funny. I forgot, it will be Anna's decision !
You my dear Fluff, it will be you or we will all go down in the street, a million women march for our favorite person.

Ok...having worked for Galliano as an intern I'd have to say(plus living here in Paris)...eeehhhh I'm taking this with a block of salt lick. He's a amazing designer and bit eccentric but verry nice dude...tru he dresses funny...and french -esp parisians can be umm....drama Q's...my deux cents.

the bird is the word!

#1- That being France, if Galliano had insulted Arabs or Africans the police would have looked the other way and perhaps the rest of the crowd would have joined in. Furthermore a trip to the " prefecture" would have never happened. there is a lot of bias here.
#2- I've been to Paris way too many times and as a person of " color" ( another term that needs to change) I've experience racism from the French on a minute by minute basis and it's acceptable there specifically at these stores. they won't do anything to change these attitudes and most probably will reinforce such vile attitudes anyway!
LVMH is just saving face or something else is going on behind the scene and want to get rid of Galliano, you never know!
#3 Most people still buy into hermes knowing perfectly well how Oprah and crew were treated when she was in paris. no one from the store got fired. If i remember well the french spokesman said they've had issues with arabs and that is why they were not responsive.

And so... it is all true. I would never believe it if it is not for the newest slip of the tongue this past Thursday. Watch this: http://www.cnn.com/video/#/video/bestoftv/2011/02/28/exp.pkg.dior.racial.rant.cnn?hpt=C2