It's another Friday afternoon and I'm bracing for another storm. I thought this would be a good time to catch up with you on all the excitement that's rocked our world these last few weeks. I won't try to squeeze it all in on this post but will do my best to get it down by weekend's end. The SAG Awards, that stepchild second race in the triple crown had some interesting sightings on the red carpet. The good outweighed the bad but all together the picture was a bit brighter than the Golden Globes. Actresses looked as though they were coming from a place of

confidence with choices that appeared a bit more personal. While in the Strand Bookstore the other day, I stumbled on a couple of Red Carpet books that covered the period from the 80's to presen

t. There were lots of imag 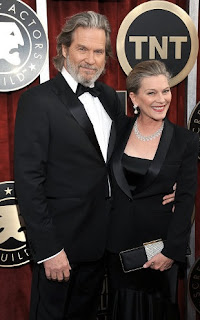 es of stars that looked fantastic and it wasn't the dress that was the focus. Like Tilda Swinton in Jil Sander, there was a brilliant Sharon Stone in a man's white shirt and ball skirt that never for a moment took your focus from her beauty. The same can be said for those actresses who choose dresses that present and elevate and not dresses that compete and obliterate. That said, I'll move on to my 2 categories: Me Likee and Me No Likee. This is just my not always so humble opinion and not meant as a shoving-down-your-throat pronouncement. We all have our likees and the fun part is sharing. Here goes:

Me Likee Natalie Portman's white A 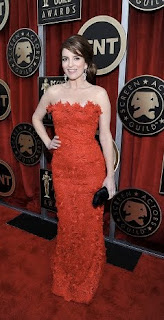 zzaro simply because she's beautiful again, glamorous and not hobbled by a saccharine pink cheesy charmeuse Viktor and Rolf with an ugly spangled rose nailed to the front. Also Annette Bening looked fantastic in glittering Tony Ward. Suitably regal as the Queen of the hill even if they give all the toys to Natalie. (I'll come back

to Ms. Portman). The men tend to get ignored and guys like Colin Firth always look GREAT, but the sleeper this tim

e was the kid from Glee, Kevin McHale who shows us that thick glasses and a wheelchair can never extinguish the fires down below..... He looks like some one's best nightmare! Hailee Steinfeld is a very beautiful young woman who stuck out like a sore thumb (in the best way) in her boldly striped Prada gown. Her example reminded me that kids never fear color and grown ups shouldn't either. Jeff Bridges and his wife Susan looked perfect in matching smokings. I mean, really, if it ain't broke why szhooszh it? There were 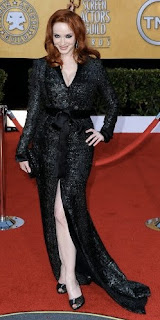 others that looked great but this would go on too long so I'll stop there.
Me No Likee Tina Fey in her tiresome red Oscar de la Renta. Honestly, she hasn't looked good since she wore Eric Gaskins to the Emmys a few years back. ( That was a chocol

ate chiffon column with tortoise shell paillettes. Google it if you don't believe me ( eric gaskins.com under Press). Jane Krakowski in shimmering white Badgley Mishka looked like she was channeling Divine in the remake of Female Trouble, the reality show. Jennifer Lawrence didn't fare much better in shocking pink Oscar. That dress is a textbook example of tortured, over draping. At a certain point the pattern maker needs to step away from the mannequin.... Whoever told Christina Hendricks that she was hot needs to come clean and let her know it was just a silly joke. No one was ever meant to get hurt.
Paz de la Huerta is the personification of CODE BROWN. Security needs to sedate her and hose her off. Saint Ann's here in Brooklyn Heights which produced her, the Schnabel gang and Zac Posen has some answe

ring to do. Lastly, Nicole Kidman in Nina Ricci has fallen precipitously in the last few years. Ever since she messed with her face nothing looks any good on her. Not this overwrought Ricci number or the other choices we've witnessed these last four years.

So there it is. I'm getting wound up so I'll let loose my thoughts on some of the Oscar drama that's brewing in my next post. Bon Weekend, et Voila!
Posted by Fluff Chance at 3:47 PM

I loved the Prada stripe for the very same reason. I wonder what's up with Tina Fey- she should dress as I see her- smart, witty- She needs to get that great skirt, blouse look-it could work or maybe the smoking jacket look, a little Kate Hepburn style wouldn't hurt. great rundown, Will love to see what the Academy has wrought.

The image of Jane Krakowski channeling Devine is priceless! And dead on. No offense to her baby bump.

I so agree about Nicole. At least she has gone back to being a redhead but what did she do to her face exactly? The surgeon should lose his/her license.

It's all true and great, thank god you are here to put it in great prose. All I can do is scream at the TV and say over and over " what happened , have they lost her mind". Annette was superb, and so was the little girl from True Grit. Nicole is starting to look like Morticia or the "walking dead". I hope they all learned something that night...

I fail to see the singularity of Christina Hendricks. She is full-figured--that's all.

I'm with you on most of your likees and no likees. As far as Christina Hendricks, whoever dresses her on the show should dress for the red carpet as well. While she looks terrific on the set of Mad Men, she's yet to accomplish that look off-set.

as usual, i laughed all the way through this! thoroughly entertaining!