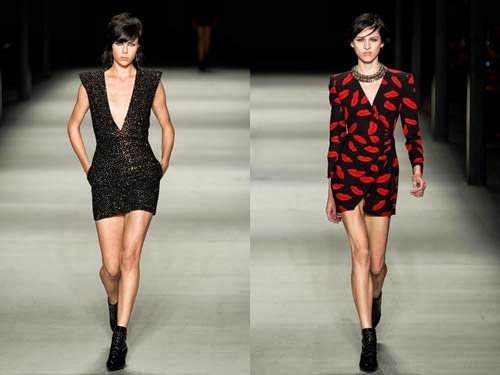 In case you're wondering what P minus stands for, it is a grade that was used in my Junior High school. It stands for Passing but below grade level. It's better than an F but not quite a D and certainly a long way from a C. I got that grade once. It was for shop class or something along those lines. Put simply, I wasn't that great working with wood and Hedi Slimane to my eye isn't so great at working with cloth. But in all fairness this collection was an improvement on the last. 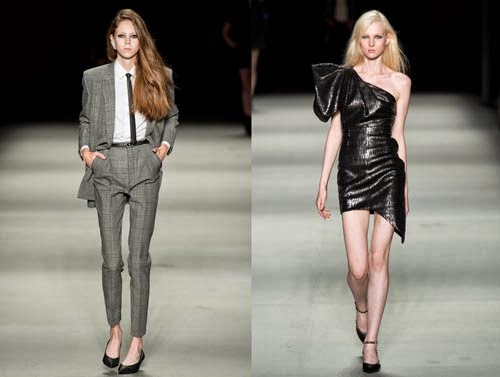 There were a proliferation of dresses that were in stark contrast to the little Home Ec confections of the last season. He made huge leaps from the spangled Baby Doll dresses. There were many cocktails with a twist here and a pouf shoulder there. But just when you started to warm to these looks out came the scissor and there went the skirts. Everything was chopped well above the knee. When the skirts traveled south of the mid thigh they were cut at severe angles that brought to mind the sorts of looks one finds in design school. 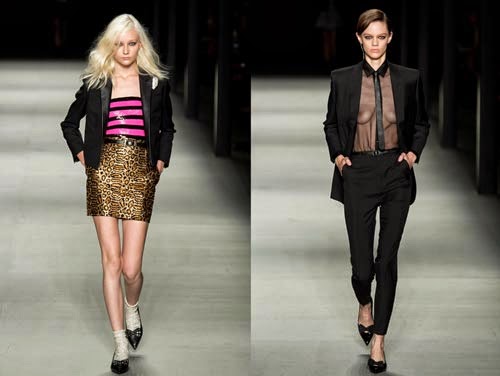 The opening look of a paillette covered little shift with a broad shoulder and slim skirt looked promising and then the next look appears in a wrap dress covered in a print of red lips. Saint Laurent doesn't need a dose of DVF no matter how dire the future looks. There was a little black strapless number that looked so sexy. There were several draped and swinging skirted cocktail dresses that had some kick. It just didn't feel like he really cared. 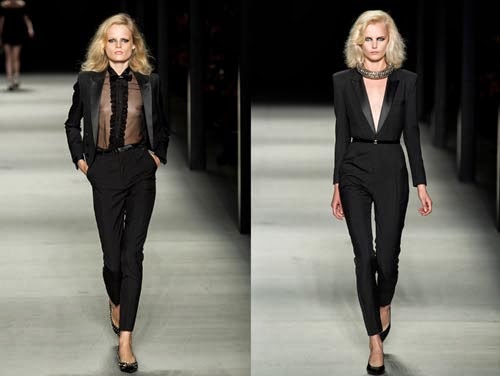 The suits which are his strength looked good if not very much the same as the first and second collections. The suits in leather and black wool, Smokings from here to next Tuesday, felt like they had a pulse. Smart tailored jackets and slim trousers got the "Oo la la" treatment with sheer chiffon blouses that are sure to be hits at retail. When in doubt, give them some T***. I loved the Prince of Wales suit simply for its simplicity. That purity of purpose was in short supply elsewhere. Mad mixes of a leather jacket (smart) over a striped sequined top in pink and black (cute) with a leopard printed skirt (umm) added up to a stylist's free (heavy) hand. This formula of 'some of this and that' occurred again and again but with the same result: flat and forced. 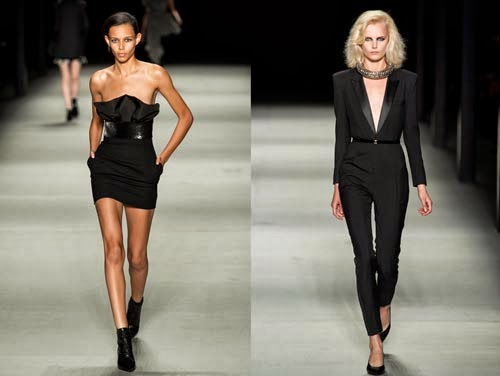 With evening there were some hot little dresses buried under jackets which left them a mystery. The styling of sparkling anklets stuffed into forgettable shoes was jarring. Chic is demode in his eyes. The paillette covered one shoulder black gown looked awkward as did many of the looks near the end. The suits buoyed what was to a large degree a listing raft. There was a little black strapless number that looked very sexy. There were several draped and swinging skirted cocktail dresses that had some kick. It just didn't feel like he really cared. 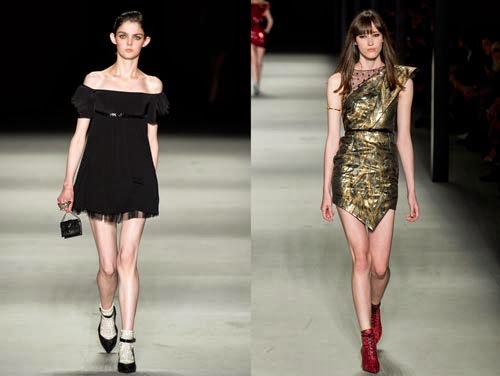 Still, I have to say it was an improvement but not what one might expect from such an important house. Maybe LA is just a bit too far from the epicenter of fashion. Hollywood Boulevard is maybe too far from Avenue Marceau. Too much gets lost in translation. Perhaps in the shops it will look better when you can see the clothes without the annoying styling. Quality doesn't appear to be in doubt only the paltry quantity of things to make one want to spend the big bucks.

And the best bit was his severing of all YSL...oops SL ties with the famed colette store in Paris for selling t-shirts that parody YSL......yeesh

The black/red wrap dress reminds me of Marc Bohan for Dior...